How LEGOs Could Change Breakfast (At Least Pancakes) Forever 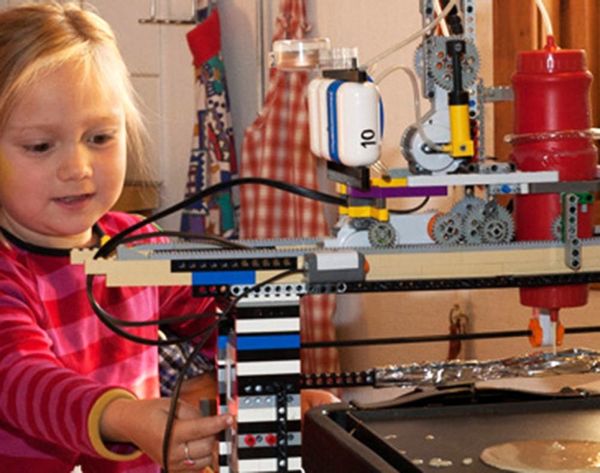 We first saw PancakeBot at this year’s Maker Faire — a machine making breakfast is kind of hard to miss, you know? — and we think it’s time for seconds. Adults were oo-ing and ah-ing over it, kids loved it and there was even a corresponding automated maple syrup dispenser. We were seriously impressed. That single tear that rolls down our face every morning while we’re spooning cereal into our mouths at our desks? Yeah, it’s because no breakfast will ever hold a candle to those cakes :’(

We needed more, so we spoke with the man behind the pancake, Miguel Valenzuela who told us all about how the ‘Bot came to be. Basically, he found inspiration in the best places possible: his three-year-old daughter… and LEGOs. Miguel was reading an article in Make magazine about a man who had built a prototype of a pancake stamping machine out of LEGO. His daughter Lily came up, he told her what he was reading, she and her sister Maia instantly started celebrating thinking their own dad was going to make a similar machine and he thought, well, why not?

Using the simple building blocks, he worked on the very first prototypes of PancakeBot until his creation could create Mickey Mouse-shaped flapjacks. They posted the below video on YouTube and thousands ate it up:

After a few Maker Faires with the LEGO version of his kitchen table Pancake CNC, Miguel (with “assistants” Lily and Maia) was inspired to keep making. This time, they wanted to put the power to make in other’s hands and kitchens. “I decided to create a version that I thought would be great as a kit and so eight months ago, I started on the new version of PancakeBot,” he told us.

Between the instant tortilla-making Flatev, the recipe resizing Drop, and the 3D printing Foodini, the new army of kitchen gadgets are promising to change the way we cook, bake and play with our food. We’re excited to see these ideas become a little more portable and a little more affordable — DIY/hackable works too ;) As they work on securing a patent and trademarking their name, PancakeBot continues to flip for folks at the Maker Faire, next stop: Paris. Think they’ll be trying their hand, er, robotic arm at crepes?

What do you think of PancakeBot? What’s the craziest kitchen appliance on your wish list?

Lisa Raphael
In her past professional lives, Lisa has served the masses as the Editorial Director at Brit + Co, Bieber Whisperer at J-14, Golden Girls Fan Club Prez at Lifetime and Talk Show Host Understudy to Katie Couric. Now, she's taking on the sports world at The Relish, teaching Hairography 101 in her spare time and will forever be trying to fill the hole Zayn Malik left in her heart.
Kitchen Gadgets
Kitchen Tools and Gadgets
Kitchen Gadgets lego
The Conversation