Must-See: The 3D Printing Foodini May Soon Replace Your Microwave 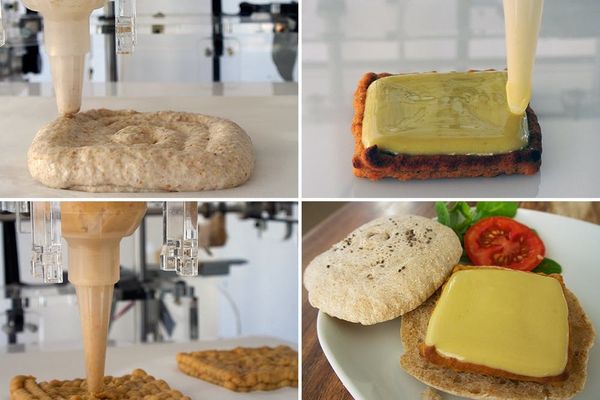 When we first wrote about Foodini a few months ago, the modern-looking contraption was just starting to shake up the way we thought about our future kitchen. Back then — yes, months are basically years in 3D printing time — the concept of printing food was still in its “appetizer” stage. We’re a little more warmed up to the idea at this point, wouldn’t you all agree? Since January, we’re embracing a whole new life of future appliances and printing any/everything. Let’s take a look at what Foodini has been up to…

3D printed burger, from bun to patty to topping to tummy. Sure, why not?

Dino spinach quiches. Bring it on.

If you still can’t wrap your head around 3D printing a meal, let us throw you a second helping of curveball: Foodini isn’t here to do all of the work for you, it’s meant to revive the art of cooking by helping you whip up homemade dishes. It might look like a little like a microwave, but it’s actually trying to take the place of it. Foodini comes with empty food capsules you fill with fresh ingredients that it will print out. You can consume the food right away if it’s edible raw, or cook it, like the burger and bun above. See, it’s not just here to make gorgeous sweet sculptures.

Although it does that too.

The 3D food printer finally made its big debut on the Kickstarter stage. The expected retail price for Foodini is $1,300, but there are still Early Bird spots left to dib one for $999. Unfortunately, it looks like Foodini won’t be helping you prep for your Thanksgiving meals unless you’re willing to make a pledge of $2,000 or more to receive it in October. Otherwise, you’re more likely to get your Foodini around January of next year. You can’t rush a good thing, like having a 3D food printer in your kitchen.

We’ll wait forever for this purple potato plate divider that we vote using for a build-your-own guacamole station. Come on, you know want an invite to that party.

Lisa Raphael
In her past professional lives, Lisa has served the masses as the Editorial Director at Brit + Co, Bieber Whisperer at J-14, Golden Girls Fan Club Prez at Lifetime and Talk Show Host Understudy to Katie Couric. Now, she's taking on the sports world at The Relish, teaching Hairography 101 in her spare time and will forever be trying to fill the hole Zayn Malik left in her heart.
3D printing
Tech
3D printing Kickstarter