Say Bye to #BakingFails With a Tiny Gadget That Resizes Recipes 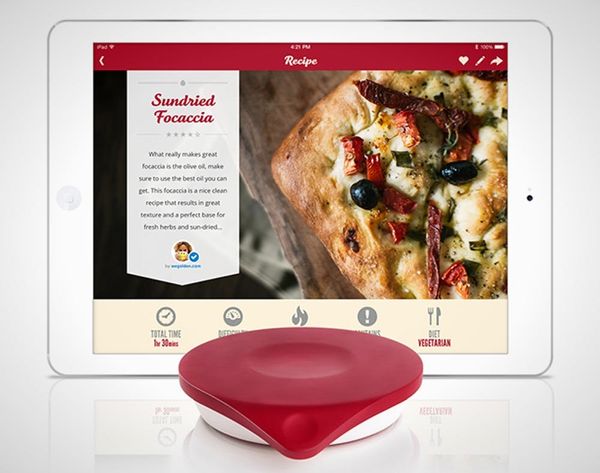 Great ideas in the tech world can be like fresh-from-the-oven pies, cooling on a windowsill while you’re outside playing, taunting you with their come hither smell, even though you don’t get to taste them ‘til after dinner. Wait, no, that’s not even a pie you get to eat — Mom made it for a party that she’s going to. WHEN WILL WE GET TO TASTE THAT PIE?! Over the last few months, Drop has been that pie that we’ve been drooling over ever since its introduction at the Launch Festival in February. And now it’s finally ready to taste. [Update: You can now buy Drop in the B+C Shop?!?!]

Drop is an iPad-connected kitchen scale that brings with it (in a way) every ingredient you could ever need. That’s because it comes equipped with its own system of recipes, its own genius conversions and a fail-proof way to nail ever mini muffin and savory scone you bake up with it, no matter what you have in your kitchen cupboards. So when we said “scale” we really meant, “all-in-one multi purpose kitchen tool.”

The company’s CEO Ben Harris dropped by Brit HQ to give us an in-person demo of the gadget and its app, and it is something you need to see in action. There’s video, but let me use my words first. See Drop? It’s cute, right? Small and well-designed (as it should be, Ben is an industrial designer) and looks like a mini Tupperware. The expensive kind that you would want to make sure not to leave at work or lend to a friend. But what it can DO is what will really burn your hot cross buns.

Ben took me through a red velvet cake recipe (mmm) displayed on Drop’s screen like a little picture book of easy-to-see ingredients + amounts. Baking is a science so these things matter — too much or not enough of something can = a baking disaster. Our red velvet cake called for two cups of flour, but (oops) we had a liiitle less than that. No bigs, we placed our bowl and the flour we could scrape up on Drop’s head, it calculated how much we had in there and **recalculated and adjusted the rest of the ingredients in the recipe** so we could still make our cake with what we had. Flour done, flip to the next ingredient, sugar in, flip to the next, buttermilk… oh. Don’t have buttermilk? Drop lets you scroll through substitutions.

The lusciously-designed app is its own little social network, featuring a community of recipes that users will be able to tap into, rate and share feedback like, “I used ground flaxseed instead of egg and it turned out bomb [dot] com!” It’s like Pinterest but less aspirational and more actual. While interacting with the recipe and scrolling through each ingredient to completion, baking becomes like a game, an illustrated, interactive to do list you’re excited to check off. Baking: The Experience is more fun than Baking: The Multiple Failed Attempts Saga, which may mean the social component of their app grows with users excited to share their souffle success with more than just a pic. Though there’s a way for you to to do that, too. #SconeSelfie!

After using it, my instant reaction was: I NEED to get this for my mom. Followed by, oh. I guess I would NEED to get her an iPad first. Seriously, the experience is that exciting that in the chicken-egg situation that could be gadget-baking superstardom, Drop could be the chicken that gives birth to the next Betty Crocker. Sign me up — and you too, the device is available to pre-order now (at a special price of $80) on its site! Take it for your own spin with Ben at the wheel below:

We asked if Drop’s API would eventually be open to developers looking to create new apps and uses for the scale. As Ben puts it: “Bakers are our developers.” Looks like Tim Cook isn’t the only CEO in Silicon Valley giving props to developers right now. Drop just knows the best ones out there can be your customers and users. Sounds like some pretty delicious beta testing to me. So… who’s ready for pie?!

Do you need Drop in your kitchen ASAP? Have you ever been in a situation it could have fixed? Share your thoughts and a favorite kitchen gadget below!

Lisa Raphael
In her past professional lives, Lisa has served the masses as the Editorial Director at Brit + Co, Bieber Whisperer at J-14, Golden Girls Fan Club Prez at Lifetime and Talk Show Host Understudy to Katie Couric. Now, she's taking on the sports world at The Relish, teaching Hairography 101 in her spare time and will forever be trying to fill the hole Zayn Malik left in her heart.
Baking
Dessert Recipes
Baking Kitchen Gadgets
The Conversation