Get Happy: Pharrell is Launching a T-Shirt Line With UNIQLO 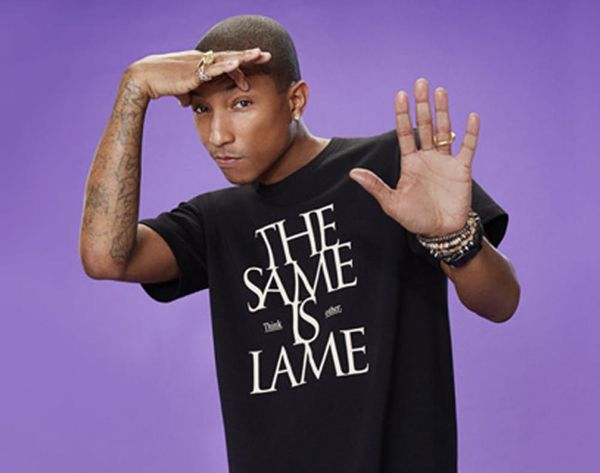 Whether he’s blurring lines in the most-talked-about music videos or simply wearing his signature vintage Vivienne Westwood hat, one thing’s for sure: Pharrell Williams knows how to make a statement. So we’re totally fine with entrusting the superstar artist-producer to amp up our basics (and our boo’s, too!) with his apparel collaboration with UNIQLO, launching online-only this Monday, April 14.

The 26-piece collection titled “i am OTHER” consists of graphic tees for him and her, as well as a handful of sporty caps, none of which are Arby’s-shaped. Named after Williams’ own company/“creative venture and way of life,” the apparel celebrates individuality with slogan-heavy designs that seem especially primed for a hashtag. “Think other.” floats in the center of a white men’s tee under a simple blue “O” graphic that really gives Obama’s campaign symbol a run for its money. “The Same is Lame” — our favorite saying of the bunch — is featured in several reincarnations on women’s tees, stamped into a winding banner or broken into different fonts with a contrast color band.

Since the collection favors muted pastels and neutrals over bold colors or trendy patterns, it’s our guess that the Grammy-winning tastemaker meant for the standout star to be the person IN the clothes, and NOT the swag itself. Available in sizes S-4XL for men and S-3XL for women AND sold at the modest price of $19.90 per piece, it truly is a collection meant for a diverse clientele — one that cannot be easily categorized. Pharrell fanatics: Get ready to deck yourself out from head to toe this summer when Williams’ sneaker collab with Adidas is slated to drop. Clap along if you feel like that’s what you wanna do.

Are you hyped for Pharrell’s UNIQLO collab? What other celebrity style lines are you crushing on right now? Tell us in the comments below.