Prince George, Princess Charlotte, and Prince Louis Are All Smiles in Their 2018 Christmas Card 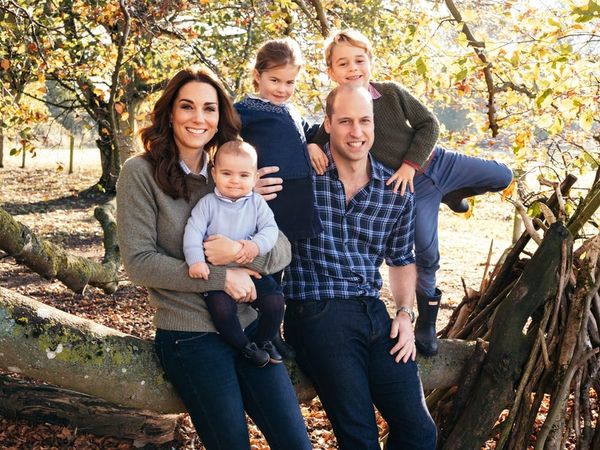 With Christmas just over a week away, Prince William and Duchess Kate Middleton have revealed their family’s 2018 holiday card, and it features an adorable new photo of their three smiling kids.

“The Duke and Duchess of Cambridge are pleased to share a new photograph of their family,” Kensington Palace tweeted on Friday, December 14. “The photograph, taken by Matt Porteous, shows The Duke and Duchess with their three children at Anmer Hall, and features on Their Royal Highnesses’ Christmas card this year.”

Prince George, 5, Princess Charlotte, 3, and the youngest, Prince Louis, 8 months, are the focus of the photo as they smile and pose for the camera. This year’s portrait marks Louis’ Christmas card debut, and is one of only a few photos the public has seen of him since he was born in April. Most recently, Louis appeared — also smiling! — in a full family portrait in honor of Prince Charles’ 70th birthday.

The Christmas card is a tradition for the Duke and Duchess of Cambridge. This year’s outdoor shoot at the family’s country home is a departure from their 2017 card, which featured the family — then still just a family of four — dressed more formally in matching blue buttoned-up attire as they posed in front of a plain photo backdrop.

Per royal family tradition, Prince William, Duchess Kate, and the children will join the rest of the royal family for Christmas with the Queen at her Sandringham home in Norfolk.

What do you think of Will and Kate’s 2018 card? Let us know @BritandCo!