See the Royal Family (Including Prince Louis!) Crack Up in a Pair of New Portraits 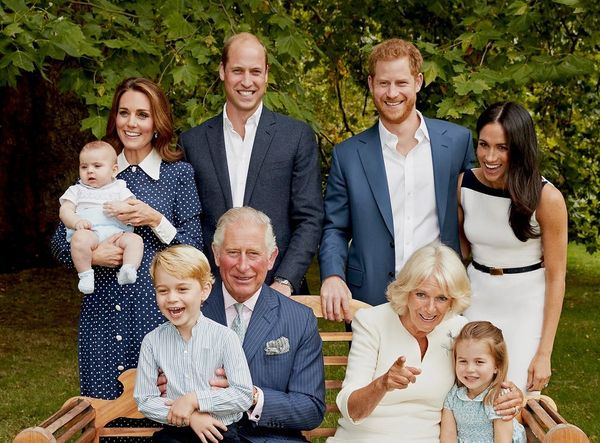 Prince Charles is turning 70 on Wednesday, November 14, and to mark the occasion, the royal family released two new portraits of the future king with his wife, Duchess Camilla; sons Prince William and Prince Harry; their wives, Duchess Kate and Duchess Meghan; and all three grandchildren, Prince George, Princess Charlotte, and even Prince Louis.

In the first picture — taken by frequent royal photographer Chris Jackson in the garden of Clarence House, where Prince Charles and Duchess Camilla reside for much of the year — the Prince of Wales sits on a bench with Prince George in his lap and Camilla by his side. Princess Charlotte sits on the other side of Camilla, while the rest of the family stands behind the bench, smiling sweetly for the camera. (Even Prince Louis appears to be grinning!)

Clarence House shared the image on Twitter and Instagram late Tuesday, with a note about HRH’s 70th birthday. It’s also featured as the main image on Prince Charles’ website.

The second photo is a little more casual and candid and shows the family mid-laugh. Duchess Camilla has one arm around Princess Charlotte and appears to be pointing at something just off-camera, while Duchess Meghan, who is pregnant with her first child, leans forward with a wide smile. Prince Harry, Prince William, and Duchess Kate, who holds a puzzled-looking Louis, also have big grins on their faces.

The portraits are the first released by the royal family to include Prince Louis since the little one’s first official photos were released back in May. Those were snapped by Duchess Kate herself at the family’s home in Kensington Palace on Princess Charlotte’s third birthday.

Do you prefer the formal picture for Prince Charles’ birthday or the one where the family is laughing together? Tweet us @BritandCo.

Desiree O
Desirée O is a ‘Professional Bohemian’ who loves anything and everything related to the arts, entertainment, and pop culture. She ADORES being a ‘Newsy’ for Brit + Co, covering all of the latest tidbits of awesomeness that you want to read about. When she’s not writing, she’s either making messy art, going on long adventurous walks with her camera, or poking around over at bohemianizm (http://www.bohemianizm.com/). You can find out about Desirée O and her work at http://DesireeO.com/ or follow her on Twitter @DesireeO.
Royal Baby
Pop Culture
Royal Baby Royal Family
More From Pop Culture