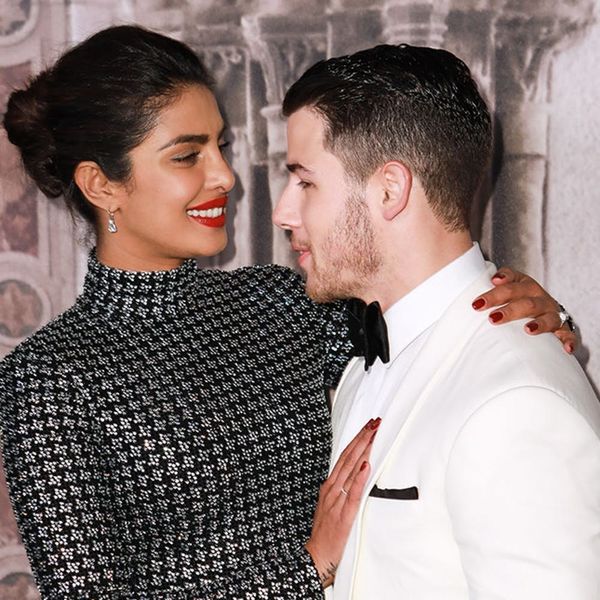 Congratulations, Priyanka Chopra and Nick Jonas! The famous couple got married on Saturday, December 1, in the first of two ceremonies at the pink sandstone-and-marble Umaid Bhawan Palace in Rajasthan, India. While we’ve been eagerly awaiting a glimpse of Chopra’s gowns, our first look from the weekend is officially here.

Chopra and Jonas posted gorgeous photos on Instagram featuring the looks from their pre-wedding Mehendi ceremony. She wore a stunning gown by Abu Jani and Sandeep Khosla, who were also the creative forces behind the entire event. The dress featured 48-multipanelled organdy sherwani embellished in silk detailing. Jonas wore an aqua Banarasi cotton Bakhiya kurta also by the designer. Jani and Khosla said, “A Mehendi calls for joyous and exuberant celebration. Priyanka’s outfit is a burst of color. Nick’s aqua is the perfect balance. They looked like a dream together.”

Chopra also wore jewelry by Abu Jani and Sandeep Khosla, crafted by Saboo for AJSK BY SABOO, which was described on Instagram as “an exceptional Heirloom piece of very fine rubies collected over generations.”

People reported that both Chopra, Jonas, and the couple’s bridal party (including Kevin and Joe Jonas) wore custom Ralph Lauren for the Western ceremony on Saturday. While we don’t have imagery of the looks yet, we’ll report back when we do.

Wearing Ralph Lauren doesn’t come as much of a surprise as the designer is close friends with both A-listers. In fact, they both wore Ralph Lauren Collection at the 2017 Met Gala. As People reported, their first unofficial date happened one week prior to the event when Ralph Lauren invited them to attend together. Don’t you just love when fashion brings two people together? And the rest was (fashionable) history.

What do you think of Chopra’s first gown?Let us know @BritandCo!

Bobby Schuessler
Bobby Schuessler is a contributing fashion writer at Brit + Co and has contributed to Who What Wear, Refinery29, Lucky, Glamour, Out, Nordstrom, and Barneys New York. When he's not writing about style and shopping, you can find him catching up on the latest Housewives franchise and sipping his go-to drink, a vodka martini with a splash of cranberry and a twist.
Celebrity Style
Celeb Style
Celebrity Style Celebrity Wedding Wedding Style
More From Celeb Style