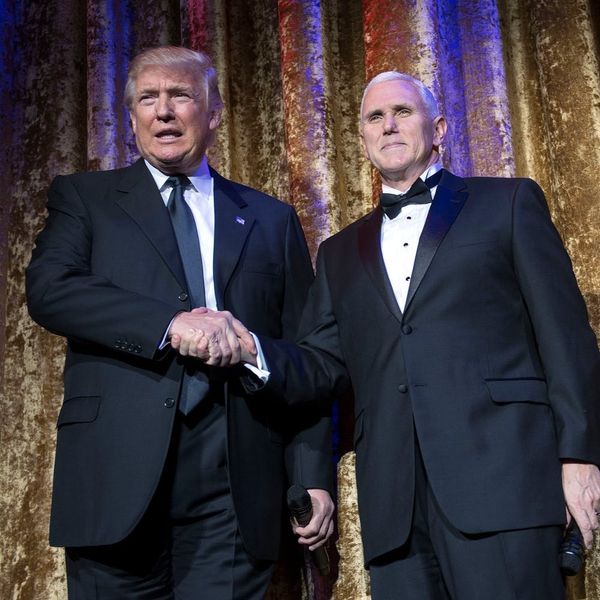 Donald Trump’s (iffy) inauguration is set for tomorrow, and while plenty of folks are ready to protest, some have already gotten the party started. Pro-LGBTQ protestors held a “Queer Dance Party” in front of Mike Pence’s house last night, and it was absolutely amazing.

“We are here tonight to send a clear message to Daddy Pence that we will not tolerate bigotry and hate in our country,” organizer Firas Nasr told the crowd, according to CNN, before leading the peaceful, partying group of approximately 200 folks to Mike Pence’s rented home.

Trump’s VP-elect already received a wildly unexpected welcome from his new neighbors, and last night his, er, guests were ready to bring the joy to his hood with singing, dancing and lots of love to go around.

A look at the crowd heading towards Mike Pence's house for a #LGBT dance party pic.twitter.com/cx9ODlbhjZ

"We are here / we are queer / we will dance" chants at #LGBTQ dance party outside Mike Pence's house on his last night living there pic.twitter.com/N4ZkQVF8qB

These are the streets outside Mike Pence's house in D.C., shut down by activists throwing a Queer Dance Party tonight. Pure jubilance. pic.twitter.com/GrJAgvSZBh

We are in Mike Pence's neighborhood having a party! A very gay party. 🎉 🎉 #disruptj20 pic.twitter.com/9hscfl1QSO

What do you think about the dance party at Mike Pence’s house? Tweet us @BritandCo!

Desiree O
Desirée O is a ‘Professional Bohemian’ who loves anything and everything related to the arts, entertainment, and pop culture. She ADORES being a ‘Newsy’ for Brit + Co, covering all of the latest tidbits of awesomeness that you want to read about. When she’s not writing, she’s either making messy art, going on long adventurous walks with her camera, or poking around over at bohemianizm (http://www.bohemianizm.com/). You can find out about Desirée O and her work at http://DesireeO.com/ or follow her on Twitter @DesireeO.
LGBTQ
Politics
LGBTQ Politics