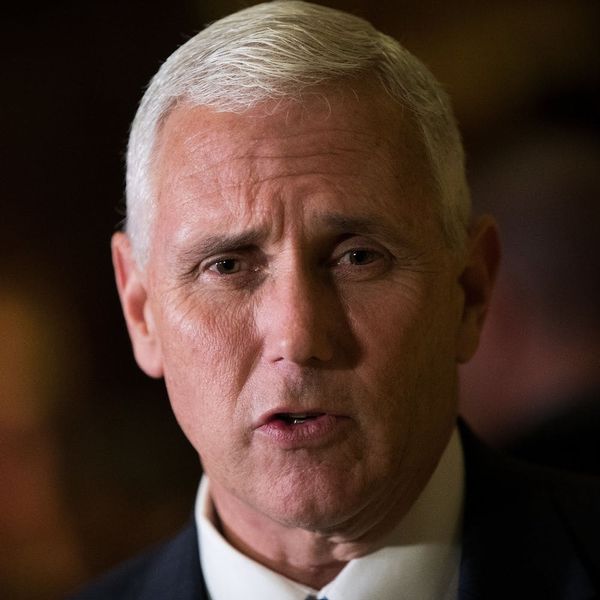 Donald Trump’s VP-elect, Mike Pence, isn’t any less controversial than his former running-mate, and is pretty darn good at stirring up a firestorm — check out the tens of thousands of donations to Planned Parenthood in Mike Pence’s name and the entire Hamilton sitch for just two examples — which is why people in his new neighborhood are prepping for his arrival. And although you might think that means added security and privacy measures, many have decided to welcome Pence in a way that’s wildly unexpected.

Mike Pence will be renting a home in Washington, DC’s Chevy Chase neighborhood until he’s sworn in along with Trump on January 20th. He will be staying on picturesque NW Washington Street, and those who are already members of the neighborhood are all set to welcome the soon-to-be VP… however, perhaps not how he would’ve wanted.

Residents on NW Washington Street where VP Elect Pence is renting a house are sending him a symbolic message. More residents may hang flags pic.twitter.com/fldYsMoP6i

Multiple residents have hung flags outside of their homes (at least 12!) so that their new neighbor and VP-elect understands fully where they stand — i.e., that these folks support LGBTQ rights and they want to remind Pence that America is the land of the free for straight folks, gay folks, bi folks, queer folks and those-who-identify-however-they-feel-most-comfortable folks.

D.C. Neighbors of VP-Elect @Mike_Pence Troll Him with Rainbow Flags for His Anti-Gay Views https://t.co/fDiEe7Cqrl pic.twitter.com/KswlMSvg3B

We have no doubt that ol’ Mike will get the message. Whether or not he’ll listen is an entirely different sitch, though.

What do you think about the welcome Mike Pence’s new neighbors are giving him? Tweet us @BritandCo!