17 Emmys Red Carpet Dresses in Every Color of the Rainbow 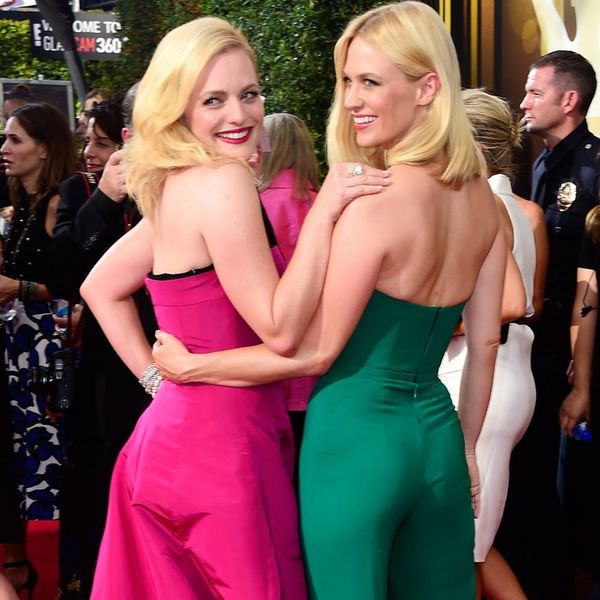 Last night’s Emmy Awards were all about historic firsts (congrats Viola!), hilarious photobombs and celebrating television’s finest and brightest, but it was also jam-packed with color. While there were definitely a lot of classic black and white ensembles, a handful of celebs used the Emmys red carpet to show off some sort of bold hue. If you’re into color as much as we are, scroll through to check out the best Emmy dresses in every color of the rainbow.

1. Samira Wiley: Poussey, we almost didn’t recognize you outside your Litchfield Penitentiary digs. The actress looked like a straight-up fashion superhero in this hot pink caped number. (Photo via Alberto E. Rodriguez/Getty)

2. Tracee Ellis Ross: Leave it to Tracee (and Zac Posen) to show us how to do cut-outs in a the classiest kind of way. (Photo via Frazer Harrison/Getty)

4. Laura Prepon: OITNB’s Laura put a new spin on the a classic red carpet dress with this regal and unique collar. (Photo via Larry Busacca/Getty)

6. Mindy Kaling: Mindy skipped the red carpet this year (probably because of that brutal heat) but she still managed to stun on stage in this orange number while presenting with Zachary Levi. (Photo via Kevin Winter/Getty)

7. Taylor Schilling: OITNB star Taylor Schilling looked like the most fashionable ball of sunshine we’ve ever seen in this bold yellow dress. (Photo via Jason Merritt/Getty)

8. Heidi Klum: There is a lot going on with this outfit, but we’re sure about one thing: pale yellow is definitely Heidi’s color. (Photo via Frazer Harrison/Getty)

9. January Jones: Award-show pro January Jones switched things up this year by opting to rock a formal jumpsuit rather than a dress. (Photo via Mark Davis/Getty)

10. Laverne Cox: Never one to skip an opportunity for some cut-outs, Laverne looked flawless in this cool-colored, figure-flattering gown. (Photo via Jason Merritt/Getty)

11. Amy Schumer: It was quite a night for Amy Schumer. The comedian went home with an Emmy for Best Variety Sketch Series and even photobombed the cast of Game of Thrones. So even though her dress was feeling blue, she certain wasn’t. (Photo via Kevork Djansezian/Getty)

12. Maggie Gyllenhaal: Always one to stun on the red carpet, Maggie rocked this giant, princess-inspired dress like a total pro. (Photo via Jason Merritt/Getty)

13. Claire Danes: Up close, Claire’s dress is actually red with blue sequins, but from far away the colors blend together, creating a vivid purple hue. Call it Emmys magic! (Photo via Frazer Harrison/Getty)

14. Danielle Brooks: Why pick one color when you can have a bit of everything? OITNB‘s Danielle Brooks had a total Lupita moment in this tri-colored number. (Photo via Mark Davis/Getty)

15. Jaimie Alexander: Actress Jaimie Alexander looked totally stunning in this long-sleeved sequined number, but let’s hope she got out of that heat and into the air conditioning ASAP. (Photo via Mark Davis/Getty)

16. Ellie Kemper: Would you expect anything less from the always-bubbly Kimmy Schmidt — er, we mean Ellie Kemper? (Photo via Mark Davis/Getty)

17. Emma Myles: Florals were few and far between on this year’s red carpet, but thankfully this OITNB actress reminded us just how epic the print can be in this watercolor-inspired number. (Photo via Jason Merritt/Getty)

What was your favorite color-packed look from the night? Share with us in the comments below.

Cortney Clift
Cortney is the senior writer and special projects editor at Brit + Co. She typically covers topics related to women's issues, politics, and lifestyle. When she's not buried behind her computer you'll find her exploring New York City or planning her next big adventure.
Red Carpet
Party
Red Carpet
More From Party