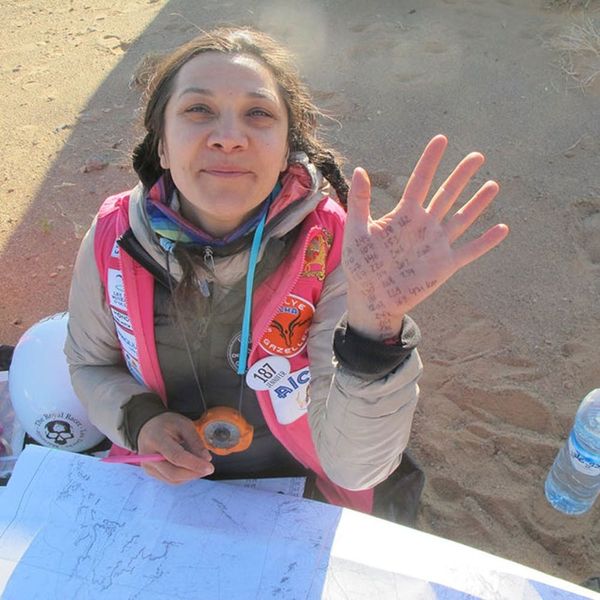 At 4am I was lying in a tiny green tent perched on the Moroccan sand when Dominique Serra was making the rounds on the encampment to wake everyone up. Serra, who’s from France, created a competitive car rally in the desert for women back in 1990. Today, 330 women from around the globe participate in the Rallye Aicha Gazelles du Maroc, the world’s only navigation-based rally just for women, which took place this year from March 21 to 30. I was attending as a reporter, thrilled to return after covering the race for the first time in 2017.

These women — who are doctors, mothers, pharmacists, chefs, lawyers, and more — spend 10 days racing across the Moroccan desert in 4x4s, buggies, trucks, quads, crossovers, and even electric vehicles. For most racers, this will be their first and only time participating, while a small group keeps coming back year after year.

When the race first started all the competitors were French, which makes sense since that’s where founder Serra is from. Today, while the majority still hail from France, they’re joined by teams from Japan, Australia, Germany, Canada, Morocco, the United States, and more. Anyone can compete, but the cost — about $50,000 a team — can be prohibitive. Most teams are funded by sponsors, though some women have saved for decades to be here.

In teams of two, competitors use nothing but maps and compasses to race their way across a course that stretches 1,500 miles through stunning landscapes of dunes, jagged black stone, craggy canyons, and long, empty expanses under the open sky.

While you might imagine that speed is the most important thing, for the Rallye de Gazelles this is not the case. Here, teams are rewarded for strategy. The goal is to drive the minimum possible distance between a series of points they are given each morning. Teams must take the coordinates they are given and plot them onto rudimentary black and white paper maps, military relics of French occupation. They then plot the shortest possible route between those points and try to follow a straight line.

After being awakened at 4am, by 6am, all the competitors are in their vehicles at the starting line, ready to begin what will likely be a 12-hour day — or longer.

The cars are released in small groups. An official waves the starter’s flag and they’re off, speeding through the sand for about 100 feet before stopping to navigate. Women leap from their vehicles with their maps and compasses in hand and scan the horizon for a “heading,” any distinctive feature in the landscape that also appears on their map. They’ll use the heading to orient themselves and plot the day’s course.

About an hour away from the encampment, I catch up with Team 187, Jennifer Kalka and Laura Sene. The two young French women are sitting in the sand, poring over their maps with ruler and compass in hand. This is their first Rallye, but that doesn’t mean they’re not competitive.

“We want to win the race,” says Kalka when I ask her about a long list of numbers scrawled on the palm of her hand. The numbers are teams she’s got her eye on.

“I’m studying every team to see who they are, what is their strategy, if they have a good level,” she says. “It’s our first time so we can’t do exceptional things, but we do our best.”

“We try to find a landmark, like a bite in a mountain or something,” says Sommerfeld, explaining their navigation techniques. She points to a distant raised plateau with a gouged-out divot that they’ll use to orient themselves as they drive. Still, even with such a reference point, the landscapes are challenging.

“In this country, stuff switches sides and sizes and disappears like a magician’s act,” says Sommerfeld. “It’s messing up this Canadian girl, who usually just knows where the Rockies are.”

Even if you’re headed in the right direction, there are no guarantees you won’t get stuck in one of the course’s many sections of dunes. A vehicle bogged down in sand can be impossible to move without getting a tow, and calling the race’s mechanical team for help invokes a penalty. Surprisingly, getting help from a competing team is both allowed and encouraged.

That afternoon I witness a familiar scene at the Rallye de Gazelles. The vehicle belonging to Team 159 is stuck on the peak of a small dune. Fortunately, a pair of Swiss competitors happened to be passing by and are using their Jeep Wrangler to free them from the sand trap.

“It’s one of the principles of the rally,” says Céline Voide of Team 159. “We’re not rated for speed, so we have time to stop and help each other.” That spirit of camaraderie is rare for this type of rally, but extremely common here.

After a long, grueling day in the desert, the racers head back to the bivouac, a massive encampment in the middle of the desert complete with restaurant, bar, toilets, and hot showers. While these women are sleeping in tents, they’re not *totally* roughing it — they’re also sipping on red wine and sampling delicious Moroccan cuisine every evening. The bivouac’s impressive restaurant, where I run into Canadian participant Sommerfeld, is made up of dozens of conjoined white tents.

“I’m so humbled, I don’t know where to begin,” says Sommerfeld of the race so far. “This has kicked my butt hard. We trained physically, I worked with my mechanic. We did all the preparation there was to do, but this has pushed me to every limit.”

It’s a sentiment shared by many women here. The Rallye de Gazelles is no leisurely ride through the desert; it’s a rigorous endurance test that compels these women to rise to incredible heights and overcome seemingly insurmountable obstacles, together. Those who have finished the rally leave with a changed sense of what they can accomplish and what’s possible. After witnessing their incredible bravery and the sisterhood these women have created out here in the desert, I plan to return once more, but next time, as a competitor.

To get involved with the Rallye in 2019, visit www.rallyeaichadesgazelles.com.

Tag us in your next travel adventure on Instagram @BritandCo!

Lia Grainger
Lia Grainger is a freelance journalist and reluctant nomad who divides her time between Canada and Spain, weather dependent. She's written for The Atlantic, Reader's Digest, the Toronto Star and other print and online publications, and her work appears in dozens of languages around the world.
Camping
Travel
Camping Travel
More From Travel