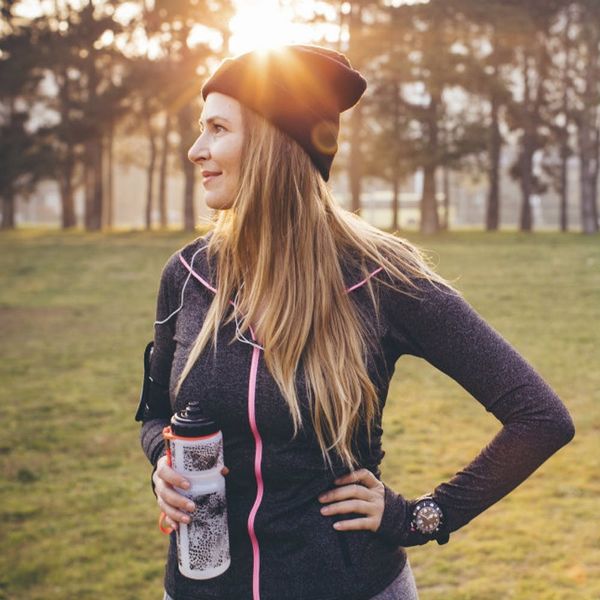 Running has always been a physical and mental slog that I’ve forced myself to do periodically, either as part of a cross-training regimen or a just-get-it-done approach to cardio at the gym. But last fall, my friend suggested we download the app Couch to 5K and work toward an actual race. Not only did it seem like an opportunity for healthy bonding time, but I’d just moved to a new area a few blocks away from the start of a beautiful running trail, so it was a way to make the best of an unplanned relocation. I agreed to give running another shot, never thinking I could be putting myself at risk beyond a blister or two.

Since we only met once a week to run together, two days a week I’d put in my headphones and take off for a 30-minute solo trail run. I looked forward to my jogs along the river and through wooded areas and grasslands, and I was excited to finally connect with a sport that I’d always disregarded as something I was naturally very bad at. As a newbie, I had no idea at first that I should be worried about my safety. My naiveté made running a simple joy.

Then, the report of an attempted assault on one of the most trafficked areas of the trail completely dashed my newbie dreams. Within three weeks, my welcome to running became an introduction to the fear that many women, including myself, have felt when they’re walking home late at night. I just hadn’t associated running a frequently manicured trail in Oregon in broad daylight with the same safety concerns I’d felt after dark in NYC or DC. Unfortunately, a majority of female runners feel vulnerable. A Runner’s World survey found that 54 percent of women often or always worry that they could be physically assaulted when they go out for a run, compared to seven percent of men. Even more women tailor their runs to be as safe as possible. Sixty-three percent of female runners choose routes based on safety, and 42 percent of women only run during the daytime. Based on reader comments in Runner’s World, a surprising number of women arm themselves with weapons — dogs, pens, corkscrews, and even guns — before each run.

Even as a beginner, I wasn’t ready to give up my new sport (and gorgeous public trail) without a fight. At the urging of a friend, I started spending a lot of free time browsing for tasers, adding them to my online shopping cart, and then closing the browser. While I was researching other safety options, I was hit with ads for a surprising number of new women’s safety devices, from wearables aiming to scare off predators with loud sounds to phone cases that can alert your friends if you need help.

Elise C. Lopez, MPH, the assistant director of the Relationship Violence Program at the University of Arizona, explains that “safety devices for women runners are controversial because they can be seen as putting the onus of prevention on a potential victim, but furthermore, they feed into the hype that most rapes are committed by strangers popping out of the bushes… Research shows that most rapes are committed by known assailants such as acquaintances.” While much less common, random assaults are still a huge concern for women runners. In addition to placing the responsibility of prevention on women, these products are an extra financial expense. Entrepreneurs are making money off of women’s vulnerability.

Reports show that women end up paying a “pink tax” of $1,400 every year for the female version of the same products men buy. In effect, we’re also paying more for the right to occupy public spaces. Women contribute the same percentage of income as men toward parks and trails, but we often feel unsafe entering the areas paid for by taxpayer dollars. So women’s use of public spaces actually costs them more.

Luckily, there are some exciting ideas out there that would make everyone safer from attacks. “Stranger attack prevention on running trails would benefit from better city planning, using what we call ‘situational prevention techniques,'” Lopez reveals. “These are methods for creating or altering the built environment to make it harder for perpetrators to commit a crime. Situational techniques can include things like lighting on pathways; increasing natural surveillance of paths by using see-through fencing instead of large hedges or walls near paths; or situating paths near businesses, play structures, or other gathering places where people congregate.”

Lopez says that while, unfortunately, women’s safety in itself doesn’t drive city planning decisions, initiatives like walkability usually make public spaces safer. Plus, there’s the high cost of retrofitting or redoing public spaces with safety in mind. But, she says, “Even doing small things like getting rid of large hedges in parks can make a big difference.”

These innovative ideas that make safety a priority will hopefully, one day, dramatically change how women are able to use parks and running trails. Until then, women can’t discount being alert and prepared. “Providing women with tools and skills to fend off attacks should not be completely blacklisted,” Lopez says. “Although there are many critiques of rape prevention options for women, and we certainly must continue to focus efforts on perpetration prevention, we have to keep equipping women with resistance techniques.”

Maybe my frustration over my beautiful, yet potentially dangerous local running trail is a good thing. Anger is known to energize people and helps us elicit change. Being robbed of this small liberty — running solo during the day — has been distressing and emboldening at the same time. In the meantime, I still have that taser in my online shopping cart.

What steps do you take to keep yourself safe while running? Let us know @BritandCo!

(Photos via Getty and Brit + Co)

Whitney Akers
Whitney is a writer that's equally drawn to the energy of a big city and the peacefulness of the Redwoods. If she's not lucky enough to be on an international adventure, you'll find Whitney enjoying all the urban hikes, used bookstores and fancy cocktails San Francisco has to offer.
running
Health
running Womens Health
More From Health