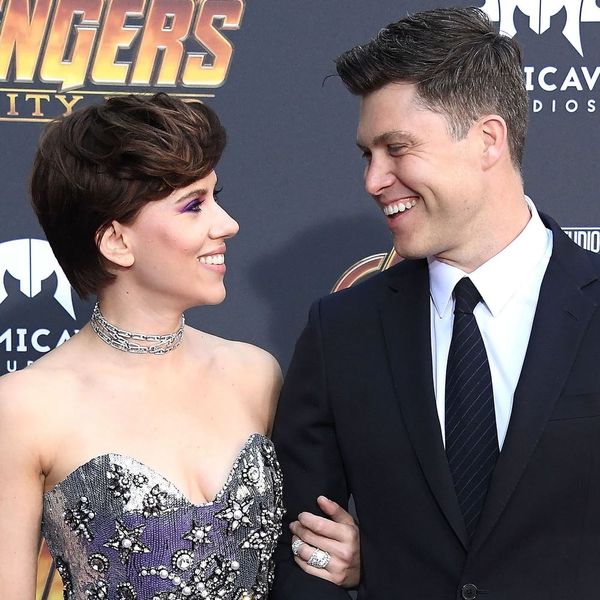 Scarlett Johansson and Colin Jost have finally gone red-carpet official! The couple posed together at the Avengers: Infinity War premiere on Monday night in LA, and they looked absolutely adorable side by side.

The Avengers star and Saturday Night Live comedian have kept their romance relatively low-key since they first sparked dating rumors in May 2017, when they were reportedly spotted kissing at the SNL season finale afterparty. But they were anything but shy about showing their happiness at the El Capitan Theatre as they smiled and linked arms on the red (well, purple) carpet ahead of Johansson’s new blockbuster premiere.

The premiere marked the couple’s red carpet debut, but it wasn’t the first time they’d been photographed together. In December 2017, they chose an understated industry event to make their first public appearance together. At the American Museum of Natural History Gala in New York City, the pair opted to walk the red carpet separately but posed for affectionate pics inside the gala.

Jost and Johansson first met all the way back in 2006. At the time, the Weekend Update co-anchor was in his first year as a writer on SNL, and the actress was doing her first hosting stint on the long-running NBC comedy show. Jost previously told People that it was “hard to have a lot of complaints” about Johansson, saying, “She’s pretty cool … She’s pretty awesome. I’m very happy. I feel very lucky.”

What do you think of the pics of Colin and Scarlett’s red carpet debut? Let us know @BritandCo!