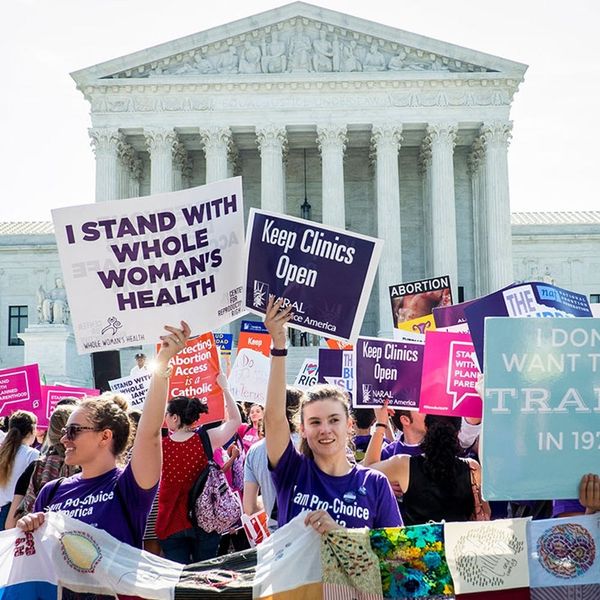 Just before all the Pride celebrations last year, the Supreme Court (AKA SCOTUS) deemed gay marriage legal in all 50 states. Now, just over a year after that ruling, the court has made history again with its newest ruling over abortion rights in Texas. Here’s the rundown on everything you need to know about this important moment in women’s health history.

What’s the deal with abortions in Texas?

Okay, so here’s the deal: Back in July of 2013, Texas Legislature passed a law called HB2. It was signed by then-governor Rick Perry and states that abortion clinics in Texas need to meet a set of new requirements in order to stay in operation. Those requirements are as follows:

1. All physicians providing abortions are required to have admitting privileges at a hospital within a 30-mile range of the clinic. FYI, “admitting privileges” means that the clinic needs to have an agreement with a nearby hospital so that if something goes wrong, they can send the patient there. These are notoriously difficult for abortion clinics to obtain and somewhat complicated. Read more about that here.

3. Medication-induced abortions will not be allowed to be prescribed via video-conferencing. Instead, the patient will have to go to the clinic in person for both the first and second pill.

4. Abortions after 20 weeks are banned except under a couple of specific circumstances.

The Supreme Court has recently ruled against not the entire law, but against numbers one and two listed above. When put into place three years ago, the state — which only had about 40 clinics to begin with — was required to shut down about half of their clinics due to the new admitting privileges requirement. Then in 2014, the ambulatory surgical center provision caused Texas to shut down another 12. A few were able to reopen when the Supreme Court stepped in the first time around, but still, the state was left with only about 10 clinics. To put that into perspective, that’s about one clinic to every 26,882 miles.

The Supreme Court took on the case again after a slew of women’s health clinics and organizations petitioned for an overruling of the law. Today SCOTUS announced they’ve deemed the admitting privileges and ambulatory surgical center clauses of HB2 unconstitutional in a 5-to-3 decision. Justice Breyer writes, “We conclude that neither of these provisions offers medical benefits sufficient to justify the burdens upon access that each imposes. Each places a substantial obstacle in the path of women seeking a pre-viability abortion, each constitutes an undue burden on abortion access and each violates the federal Constitution.”

So what happens now?

Well, more clinics will become available and reopen in Texas, for starters. But additionally, the striking down of HB2 is expected to cause a ripple effect in other states with similar abortion restrictions in place — that is, required hospital admitting privileges and outpatient surgery standards. Those laws will likely be reviewed and more clinics may be reopened across the country.

According to the Associated Press, admitting privileges is a requirement in Missouri, North Dakota and Tennessee and currently on hold in Alabama, Kansas, Louisiana, Mississippi, Oklahoma and Wisconsin. The hospital-like outpatient surgery standards are in place in Michigan, Missouri, Pennsylvania and Virginia.