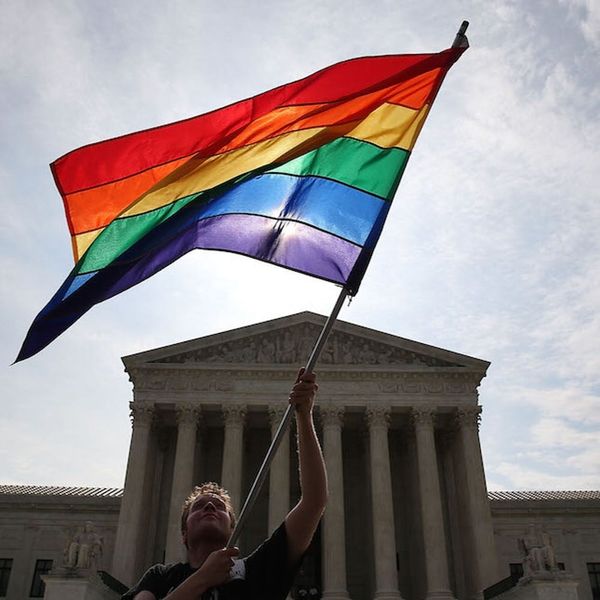 The Supreme Court ruled in a 5-4 decision today that States will no longer be allowed to ban gay marriage and that all states must legally recognize same-sex marriage. This follows in the footsteps of the 2013 ruling that struck down the Defense of Marriage Act and the appeal for Prop 8 establishing greater rights for same-sex couples. Watch President Obama address the nation live here.

Justice Anthony Kennedy, considered the crucial swing vote in this case, authored the majority opinion of the court. In it, he writes: “The nature of marriage is that, through its enduring bond, two persons can together find other freedoms, such as expression, intimacy, and spirituality. This is true for all persons, whatever their sexual orientation.”

“Today I could not be prouder of my country, more grateful for the memory of my late husband John, and more indebted to the incredible lawyers, advocates and fellow plaintiffs who made this landmark day possible. The fact that the state I have long called home will finally recognize my marriage to the man I honored and cherished for more than 20 years is a profound vindication—a victory I’m proud to share with countless more couples across the country. Thanks to the Supreme Court, a period of deep injustice in this nation is coming to a close, but it’s also clear today that there is still so much work to do.

As long as discrimination against lesbian, gay, bisexual and transgender people is tolerated — whether in the seeking of a marriage license, the pursuit of fairness on the job, or the fight for equal treatment at a restaurant or business — we haven’t truly guaranteed equal justice under the law. But today’s victory proves that anything is possible, and I could not be more hopeful about the capacity of this country to change for the better.”

Several of our nation’s leaders have taken to Twitter to celebrate the decision, including our POTUS, VP and Hilary Clinton:

Today is a big step in our march toward equality. Gay and lesbian couples now have the right to marry, just like anyone else. #LoveWins

Proud to celebrate a historic victory for marriage equality—& the courage & determination of LGBT Americans who made it possible. -H

All marriages at their root are about love. In America, our laws now recognize that simple truth. #LoveWins today & we couldn't be prouder.

Will you be out celebrating the landmark decision? Let us know what you think in the comments below!

Kimberly Wang
Kimberly Wang writes about all things pop culture, tech, style, and beauty. She's a Bay Area transplant and has an MFA in Creative Writing from Columbia University. On a sunny New York day, you can find her hanging out with her mini schnauzer Isabelle Jellybean on a blanket in Central Park.
Party