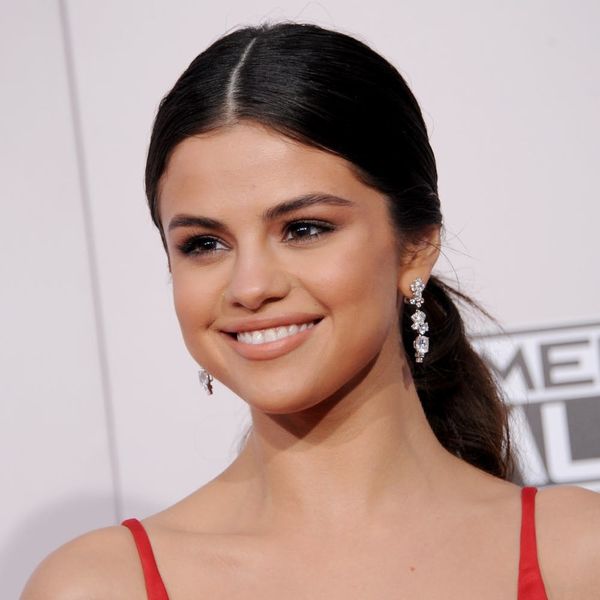 While Bella Hadid is off enjoying the sunny weather in the tropics for her first luxe gig of the year, her ex, The Weeknd — who she totally had a (publicity stunt?) *moment* with at the Victoria’s Secret show — is heating things up with a new flame. People are more than a little shocked to find out that Selena Gomez is apparently dating the “Starboy” singer, and the pics from their kissy date last night seem to prove it.

Fans of both performers have been totally surprised by this new potential relationship that’s apparently come out of nowhere. Spotted together last night at Giorgio Baldi in LA, a source revealed to E!, “They were there for three hours! Just the two of them. They came out and were so happy.”

And the pics certainly seem to back that up. With 24-year-old Selena wrapping her arms around 26-year-old Abel’s neck (yep, that’s his real name) and his hand covering hers, the only thing more noticeable was the giant smiles on both their faces. That is, until they kissed. Wowza!

As expected, folks are either shipping this hard or are not feeling it at all…

selena gomez and the weeknd? 2 gorgeous and talented human beings? i'm down as hell

selenA GOMEZ AND THE WEEKND Y'ALL IM SO HAPPY

hmm I'm just not quite feeling Selena n the weeknd

Dear The Weeknd, not only did you downgrade by 100000%, but you lost some of my heart #whatareyouthinking

the weeknd is hella cancelled for dating selena gomez. wtf, put some respeck on your name

Selena Gomez and The Weeknd spotted kissing beside a dumpster because that relationship is trash.

We have to wonder what Bella is thinking about this sitch.

What do you think about Selena Gomez and The Weeknd as a couple? Tweet us @BritandCo!