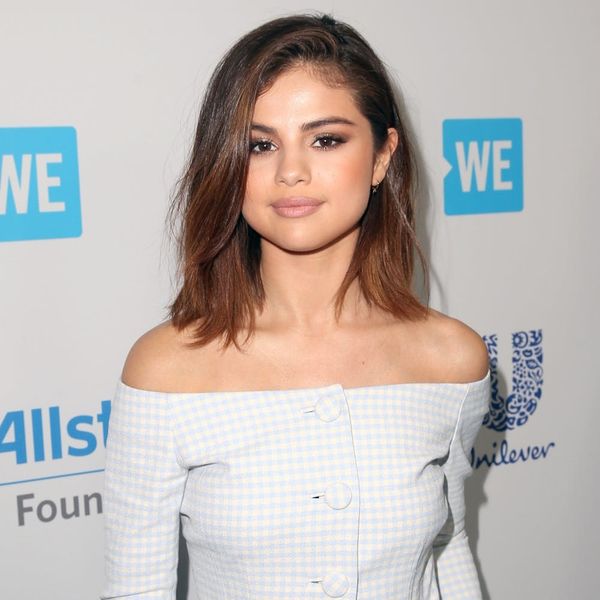 Selena Gomez recently made headlines for swapping her wavy locks for a short new ‘do, but it looks like the joke’s on us. The 13 Reasons Why executive producer hosted an event on Thursday, and while she was there, she revealed some surprising hair revelations…

Turns out the singer never made the bob. It was a wig!!

“It was so funny. I was trying on different stuff and I posted a picture [because] I liked the image. Evidently, people thought I cut my hair real short, but it’s still the same… it’s a little chop,” Gomez revealed to Extra. Chop or no chop, girlfriend looks gorgeous.

Meanwhile, her outfit was quite attention-grabbing as well (she even matched the blue carpet!). The getup was comprised of a cropped, off-the-shoulder button-down and chic wide-leg pants to match. She added a pair of sky blue patent leather Christian Louboutin pumps to finish it off. Modern as the getup may have looked, it also had roots in classic ’90s nostalgia, as stylist Chris Classen revealed on his Instagram page.

Giving us a closer glimpse of Gomez’s top, as well as some insight to its inspo, the celeb stylist “clued” us in to which iconic teen movie was the inspo behind the look. He captioned the pic: “#AsIf • #cluelessvibes • @brockcollection.”

We totally get the Clueless vibes: Cher Horowitz would surely approve of Gomez’s checkered style, given her penchant for matching yellow checked plaid and all.

What do you think of her coordinated look? Are you into it? Tweet us @BritandCo!

Channing Hargrove
Channing Hargrove is a freelance fashion editor and writer in New York City. When she isn’t writing about clothing (or shopping, for research, of course), Channing is writing about life in a tiny studio apartment in a big city — and what she’s wearing — on her blog, Channing in the City.
90s
Hair
90s Celebrity Hair Nostalgia Selena Gomez
More From Hair