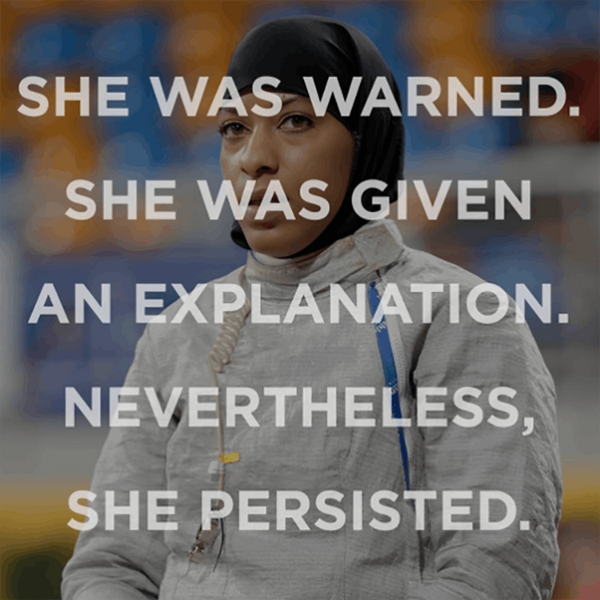 In just a little over 24 hours, the hashtag #ShePersisted has become the new feminist call to action. First, Trump helped coin the now empowered phrase “nasty woman” when he used the term to describe Hillary Clinton in a debate. Now, Majority Leader, Senator Mitch McConnell just sparked a new feminist phrase that’s bound to stick after silencing fellow Senator Elizabeth Warren when she was trying to read a letter by Coretta Scott King about newly confirmed US Attorney General Jeff Sessions. McConnell told the Senate, “She was warned. She was given an explanation. Nevertheless, she persisted.” And just like that, the memes and social media tributes began rolling in. Here are a few of our faves.

#ShePersisted and became the first U.S. Olympic athlete to compete while wearing a hijab.

All day yesterday, California Senator Kamala Harris shared McConnell’s words layered over influential women like Ibtihaj Muhammad (pictured above), who was the first US Olympic athlete to compete while wearing a hijab.

Yesterday, #ElizabethWarren's effort to denounce attorney general nominee Jeff Sessions included reciting a scathing takedown of his policies written by Coretta Scott King, Martin Luther King Jr.’s widow, in 1986. She was blocked from reading of the letter because, in Senate Majority Leader Mitch McConnell’s words “she was warned. She was given an explanation. Nevertheless, she persisted.” But as the saying goes, well-behaved women seldom make history. It’s those who challenge, refuse to be silent, and speak loudly to their beliefs that change the world. Today, we’re joining the call to celebrate the women who have broken boundaries against all odds—like women’s rights activist #Malala Yousafzai, above. We’re hoping you join, too, using the hashtag #ShePersisted. If we all speak as one, we can never be silenced.

"She was warned. She was given an explanation. Nevertheless, #ShePersisted." The history of progress for women, summed up in 11 words.

I ran out of space. Didn't even get to most of the ones I heard while I was working in STEM fields. #shepersisted #feminism #politicalart #linedrawing #misogyny #women #microaggressions

Artist Courtney Privett’s illustration has been shared widely across social media since yesterday.

"She was warned. She was given an explanation. Nevertheless, she persisted."

Just a little shout out from Hillary Clinton, NBD.

I mean, has there ever been a motivational phrase so fit for a little hand lettering?

"She was warned. She was given an explanation. Nevertheless, she persisted" sounds like a great new rallying cry for the feminist movement.

We’ll take this in a print, please and thank you.

"She was warned. She was given an explanation. Nevertheless she persisted." pic.twitter.com/w7bHTUKgst

Harriet Tubman, a great example of a woman who encompasses this new mantra.

She was warned. She was given an explanation. Nevertheless, #ShePersisted

All the feels for these two powerful photos shared by Hollywood screenwriter Tananarive Due.

Please know that my entire goal in life is for old dudes to say "Nevertheless, she persisted" about me.

And lastly, here’s a little something from yours truly.

Cortney Clift
Cortney is the senior writer and special projects editor at Brit + Co. She typically covers topics related to women's issues, politics, and lifestyle. When she's not buried behind her computer you'll find her exploring New York City or planning her next big adventure.
Feminism
Politics
Feminism Politics