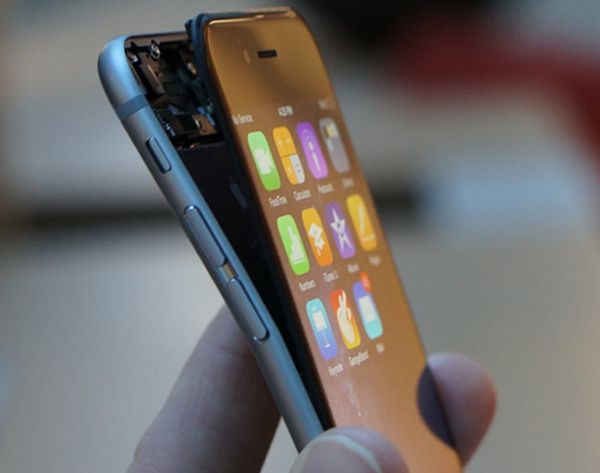 Guys, have you heard the iPhone 6 is bendable (cue the heavy sarcasm)?! Since its recent release, photos and video of bent iPhones have sparked chaos across the the Internet. Teens have been trying to prove the rumor true by bending phones in the Apple store and the company has even opened its testing lab to the media. The days of #Bendgate are officially upon us, folks. Times may seem tough, but with a little bit a guidance (and lab testing) it looks like we might all make it out alive – and with fully functioning smartphones no less.

Consumer Report released a video of the iPhone 6 and iPhone 6 Plus being put to a bendability test. Turns out, the new Apple smartphones don’t actually bend all that easily – although still easier than the iPhone 5. The 6 Plus started to deform after 90 pounds of force and came apart with 110 pounds while the standard size 6 bent after 70 pounds and came apart after 100. The 5 however, didn’t bend at all until 130 pounds of pressure and didn’t break until 150 pounds.

Now Square Trade, an extended warranty service provider for electronics, has released a video, not testing the bendability of the phones specifically, but rather the general breakabililty. To start, they tested how far each phone slides. The 6 Plus slides a longer distance because it’s heavier (Newton’s Law, anyone?). Next they dipped each phone in water while a video was playing. While the picture continued to work, the audio shut off temporarily after 10 seconds. After a few minutes it began working again on both phones. Last up, the drop test. After six drops the iPhone 6 had only a few scratches. Square Trade says this is the best a phone has ever performed in the drop test. (Good news, fellow klutzes!) The 6 Plus didn’t do quite as well, separating at the side after the same amount of drops. The final conclusion? Square Trade deems the 6 and 6 Plus are bigger and more durable than any before them.

Are the new iPhones indestructible? Definitely not. You’d be hard pressed to find a phone that is. Is it as flimsy as the web has led us to believe? No. Consumer Report and Square Trade have proven the new phones are actually pretty well-suited for everyday use. This may come as a shock, but it seems the Internet may have (gasp) overreacted.

Do you have a new iPhone 6 or 6 Plus? How have you found it to hold up? Share your thoughts with us.

Cortney Clift
Cortney is the senior writer and special projects editor at Brit + Co. She typically covers topics related to women's issues, politics, and lifestyle. When she's not buried behind her computer you'll find her exploring New York City or planning her next big adventure.
Apple
Tech
Apple