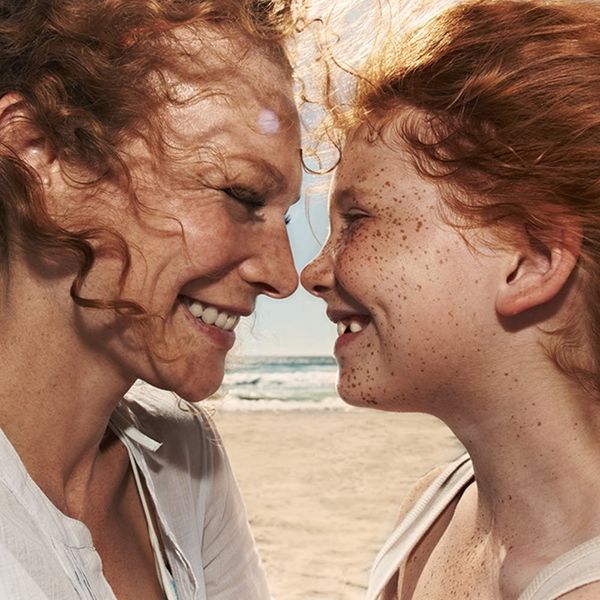 Red alert: Scientists may have discovered what creates those gorgeous ginger tresses. You know that the coloring has been mythologized (and sometimes mocked) throughout history, but what you may not know is that for a long time, scientists didn’t exactly understand why some people have red hair. A new study published in the journal Nature has moved them closer to finding out — and brought up some interesting surprises.

How does hair color work?

On a basic level, natural hair color is determined by how much melanin pigment is in your hair, and what kind of pigment it is. There are two types of melanin: Eumelanin, a dark pigment that can block UV light, and pheomelanin, a lighter pigment which can’t. People who produce lots of eumelanin often have brown or black hair and skin that tans or darkens easily in the sun, while people who produce more pheomelanin are usually blonde or light-haired, with lighter skin and freckles.

The gene that dictates how much pigment you produce and what kind is called the MC1R gene. Dr. Ian Jackson, PhD, Group Leader of the MRC Human Genetics Unit at the University of Edinburgh in the UK, who supervised the study, explains, “MC1R is a protein that sits on the surface of the pigment-producing cells [melanocytes] and responds to signals from the skin and hair to make dark pigment. As far as we know, this signal (MSH) is made all the time.”

So where does red hair come into this? Scientists have known for a while that people with naturally red hair have a common variation (known as a polymorphism) in their MC1R gene. Actually, they have two, one from each parent. Dr. Jackson elaborates, “In red-haired individuals, MC1R is less able to respond to the MSH signal, so it makes less or no dark pigment and instead goes to the default state of making red pigment.”

The Mystery of Red Hair

So far, so simple. Someone happens to inherit two variations of the gene that controls which pigment is in your hair and how much is produced. Those variations mean that the person can’t produce dark pigment, and therefore they have red hair.

Ah, but that’s where the mystery comes in! Using genetic data from the UK Biobank, a big database of health information (including DNA) from 500,000 UK volunteers, the study’s authors point out that most people who have these two genetic variations, who should theoretically have red hair, actually have light blonde or brown hair. “Although pretty much all redheads have two variant forms of MC1R (one from each parent) and so can only make variant MC1R, which is less able to respond to MSH [and therefore doesn’t make much or any dark pigment], not all people with two variant forms have red hair,” explains Dr. Jackson.

To get to the bottom of this question, the researchers looked closer at the DNA data from the UK Biobank. They excluded anyone who wasn’t white and British, because there is more variability in hair color of white Europeans, which left 343,234 subjects to look at. Their results showed that it’s not just MC1R genes that matter: The authors identified eight other genes that have an impact on red hair. For example, Dr. Jackson explains, “one of them codes for MSH, which makes sense: Changing the amount of signal will affect the way the variant MC1R works.” In other, less technical words, this gene controls how much of that signal gets through to the cells that produce pigment, which could determine the shade and tone of your red hair.

Some of the findings surprised even the researchers. By combining their results with information from previous studies, they found that genes that controlled hair shape and texture also played a role in hair color. So it’s not just how much pigment your body makes or what kind, but the kind of hair you have that will determine the color. “It does make sense, as we know that the hair cells are ‘talking’ to the pigment cells, not least by making MSH, and changes in these cells could affect that conversation,” Dr. Jackson muses. “Also, the speed at which the hair grows would affect how much pigment it picks up. Thickness might also affect that, plus thickness might subtly affect the way the pigment looks. Studies have shown that on average blonde hair is thinner than black hair — and my hairdresser agrees! So we can rationalize the finding, but it was a surprise.”

In case anyone with blonde, black, or brunette hair is feeling left out, there were some discoveries surrounding those hair colors too. “We found about 200 genes that influence whether non-red hair is blonde, brown, or black,” Dr. Jackson adds. “There is a continuous range of hair color, and the number of genetic variants you have determines where you are on the spectrum going from blonde through light brown, dark brown to black.”

As fascinating as these results are, this study wasn’t just about hair color. MC1R variations and their relationship to red hair served as a useful stand-in for other genetic topics. “The point of the study, besides it being of big public interest and helping educate the public about more complex genetic issues, is that it acts as a model for more complex genetics, in particular, genetic diseases,” Dr. Jackson says. “Most common genetic diseases like heart disease, diabetes, and psychiatric diseases, have multiple genes involved plus a lot of environmental influences like diet, exercise, life experiences. Hair color is pretty much 100 percent genetics, so we could study the genetics without having to consider environment.”

That means this study could be extremely useful later on. “What we are doing now is asking what the genetic variation is doing to the gene,” Dr. Jackson continues. “Most of them don’t change the protein that the genes are making — MC1R is an exception — but must be altering how much is made. The same is true for the genetic variation we find associated with genetic diseases. So determining the functional impact of this genetic variation is the key goal for us, and for many working on other complex genetic traits or conditions.” In the meantime, we hope this study makes you appreciate the amazing odds that went into giving you your own natural hair color, whichever shade it is.

Are you a proud redhead? Share your most beautiful photos with us @BritandCo.

Natasha Lavender
Natasha Lavender is a Londoner living in Chicago, and is fluent in British and American. She writes about pop culture, health, lifestyle, feminism, fashion, and interviews with interesting people, and has previously worked for Good Housekeeping magazine, Buzzfeed, and Hello Giggles. She loves podcasts, running, reading, dogs and cats equally, and peanut butter anything.
Hair
Health
Hair Hair Color Study
More From Health