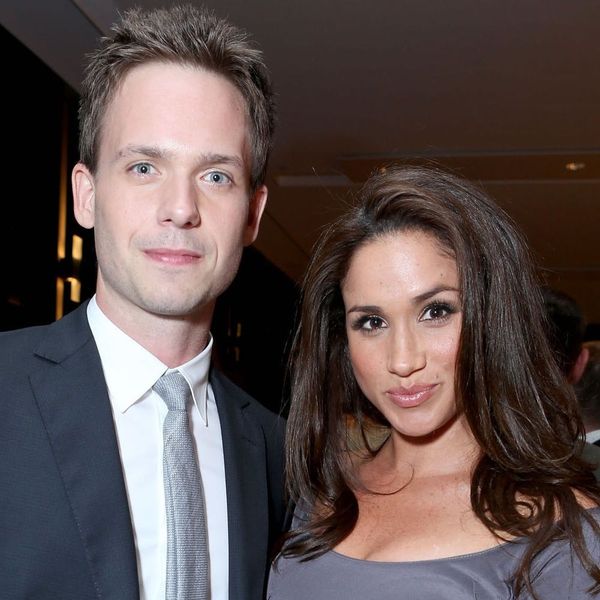 The royal wedding is less than a month away, but before Meghan Markle walks down the aisle to marry her real-life prince on May 19, she’ll be tying the knot on the small screen, as her Suits character, Rachel Zane, FINALLY says ‘I do!’ to Mike Ross (Patrick Adams). The network has given us a sneak peak of the nuptials with its newly released finale trailer, and yes, it’s every bit as magical as you might have hoped.

The fictional couple were set to wed two seasons prior but was postponed due to Mike’s unexpected incarceration. Now, the lovebirds are finally, FINALLY getting their special moment.

“I can’t believe it, this could really happen,” gushes Rachel at the start of the 40-second clip. She’s then shown entering the venue in a stunning Anne Barge gown (the same one she wore the first time around, only slightly altered).

As she approaches the flower-laden altar, we see the blushing bride’s beau waiting for her alongside Harvey Specter (Gabriel Macht) and Donna Paulsen (Sarah Rafferty) who have taken on Best Man and Maid of Honor duties. “I’ve wanted to marry you from the second I met you,” says Mike, as Rachel answers, “You are the husband I’ve always wanted.” Someone get the tissues!

Markle and Adams will both leave the show after season 7.

Tune into the heart-melting season finale, which will air in two parts, starting on Wednesday at 9pm on USA.

Are you excited for Markle to walk down the aisle IRL? Tweet us @BritandCo.

Barbara Pavone
Barbara Pavone is a pop culture-obsessed writer based in beautiful (but ridiculously cold) Montreal, Canada. When she's not working, she's sipping on a Pimm's Cup and daydreaming about her celebrity hero, Saint West.
TV
TV
TV Weddings