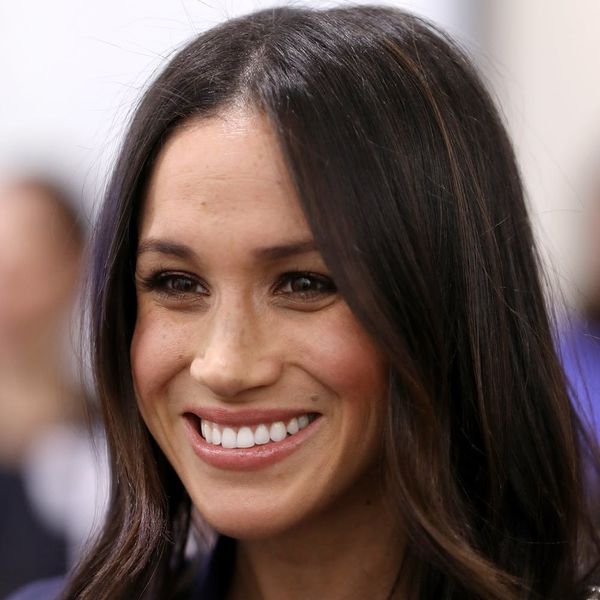 Meghan Markle may not be getting married for another month and a half, but we don’t have to wait to see her in a wedding dress! The Suits star, who is wrapping up her final season on the show, is walking down the aisle as her character of Rachel Zane, and newly released pics from the episode are predictably stunning.

In exclusive photos shared by Entertainment Weekly, the bride can be seen walking down the aisle in a gorgeous Anne Barge gown with a black belt, a V-back with a sheer mesh inset, and a beaded bodice with embellishments sprinkled down the front of its full skirt.

If the dress looks somewhat… familiar, that’s because you’ve actually seen it on Rachel before: A rep for NBC confirmed to Harper’s Bazaar that the character did indeed wear the very same gown back in season five, when she and soon-to-be hubby Mike Ross cancelled their wedding last minute.

There are, of course, differences in the design — where the gown’s back was once beaded to match its bodice and skirt, it’s now free of adornment, replaced instead by a sheer mesh panel. It also appears to be more fitted, with what Barge confirmed was the addition of a thin, black, waist-cinching belt.

In addition, Rachel switched up her hairstyle for her second-go-round as a bride, ditching the classic updo we saw on her two seasons ago for straight hair that loosely cascades down her back.

As for the TV couple themselves, they certainly won’t be calling things off this time around: Suits creator Andrew Kosh confirms that Rachel and Mike will finally get their fairy-tale ending, telling Entertainment Weekly, “I was pretty happy with that because I know we do a lot of bittersweet things on the show, and it just felt good to give [Markle and Patrick J. Adams, both of whom are leaving the show] a really good send-off.”

What do you think of Meghan’s faux wedding style? Share with us over @BritandCo.

Nicole Briese
Nicole is the weekend editor for Brit + Co who loves bringing you all the latest buzz. When she's not busy typing away into the wee hours, you can usually find her canoodling with her fur babies, rooting around in a bookstore, or rocking out at a concert of some sort (Guns N' Roses forever!). Check out all her latest musings and past work at nicolebjean.com.
Celebrities
Wedding Style
Celebrities Celebrity Style TV Wedding Style
More From Wedding Style