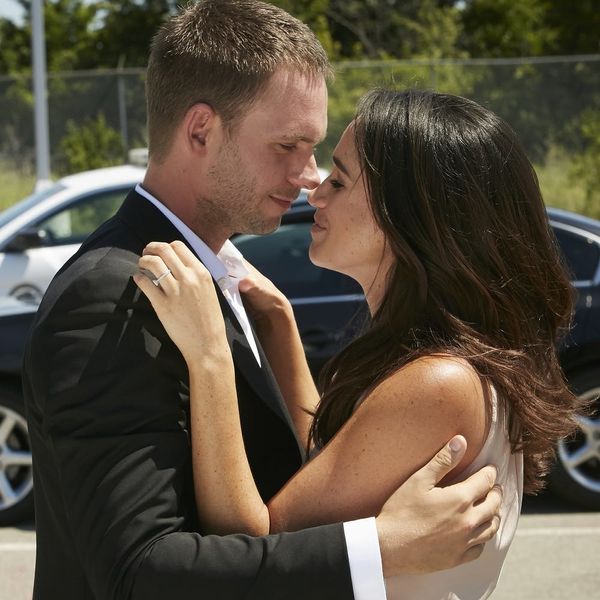 When it was confirmed that Meghan Markle would be leaving her starring role on Suits following her engagement to Prince Harry, fans wondered how her character’s love story with Mike Ross (Patrick J. Adams) would play out on-screen. Now that a trailer for both actors’ final episodes has been released, viewers can rest easy, as it seems like the fictional lovebirds are getting the sweet send-off they deserve.

The trailer begins with Adams’ character, Mike Ross, telling Markle’s Rachel Zane that he has wanted to marry her since the second he met her, and it only gets better from there.

When they’re not making out, they’re whispering sweet nothings like, “You are my future,” and “It will be the adventure of the lifetime.” We see some of their most romantic moments play out in flashback — from Rachel agreeing to move in with Mike to Mike getting down on one knee to pop the question to their reunion after his release from prison. Not much is actually revealed about the plot of the remaining six episodes, but the short trailer hints that the characters might be leaving the law firm to embark on a new path together.

USA Network confirmed in January that, along with Markle, Adams would be leaving the show at the end of season 7.

Markle started dating Prince Harry while she was still filming Suits, and recently, actor Wendell Pierce, who plays Markle’s on-screen father Robert Zane, revealed that she would talk about her boyfriend in a rather hushed way on set. “She met this nice guy and we always talked about him in code, really,” Pierce told Harry Connick Jr. “You know, ‘How you doing?’ ‘Oh, I’m going to London, coming from London,’ whatever.” The pair are set to marry on Saturday, May 19, 2018.

Suits returns for the final six episodes of the season on Wednesday, March 28, at 9pm, with Markle and Adams’ final two-hour episode set to air on Wednesday, April 25. Check out the trailer for the upcoming episodes below.

From coworkers to lovers and everything in between. Find out how Mike and Rachel's story ends when #Suits returns March 28.

Will you be watching Meghan Markle’s final episodes of Suits? Let us know @BritandCo!