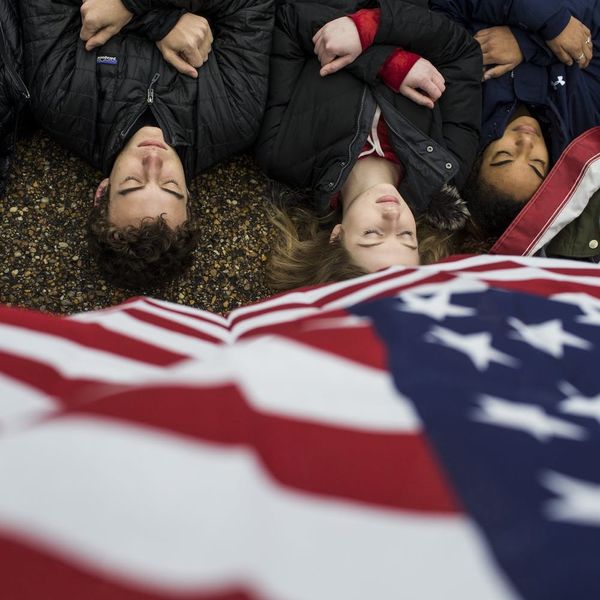 Across the country, students are mobilizing to create change in light of last week’s school shooting in Parkland, Florida that left 17 dead and many injured. While this isn’t the first shooting at a school in 2018, something has sparked the high school students both at Majory Stoneman Douglas and throughout the US, including teens from the DC area who organized a mass lie-in outside the White House yesterday to demand gun reform.

Using social media, the teens rallied over the weekend, creating their lie-in (or as they called it, according to CNN, a “die-in.”) on President’s Day. The students goal is to force lawmakers to actually sit down and change gun laws in the US so that mass shootings like Parkland, Sandy Hook or Columbine never happen again.

Part of why the Parkland students are so effective is they're assigning blame. They're saying YOU are the cause of this problem. As opposed to "we" or "America" or "humanity," which is the usual lazy posturing.

These kids have identified the cause of the atrocity.

Many of the kids protesting aren’t even old enough to vote yet, but they wanted to use their voices to not only show their parents that they are ready for change, but to send the message that even if they can’t vote this year, they will be able to vote in the future, and on their minds is gun violence in their schools and gun reform.

While DC locals were able to rally immediately, the survivors of Parkland have been mobilizing in Florida. Teens have been working overtime since last week’s shooting, creating the #NeverAgain movement, organizing protests, a school walk out on the anniversary of the 1999 Columbine High School shootings in April, and March 24th’s March for Our Lives.

With signs that read, “Blood on your hands NRA,” and “Love your KIDS not your GUNS,” the student protesters are ringing alarm bells loud and clear: It’s time for gun reform, today, in the US, and if things don’t change, these kids will make the changes happen on their own terms.

Will you be supporting student-led protests in the next few months? Let us know @BritandCo!