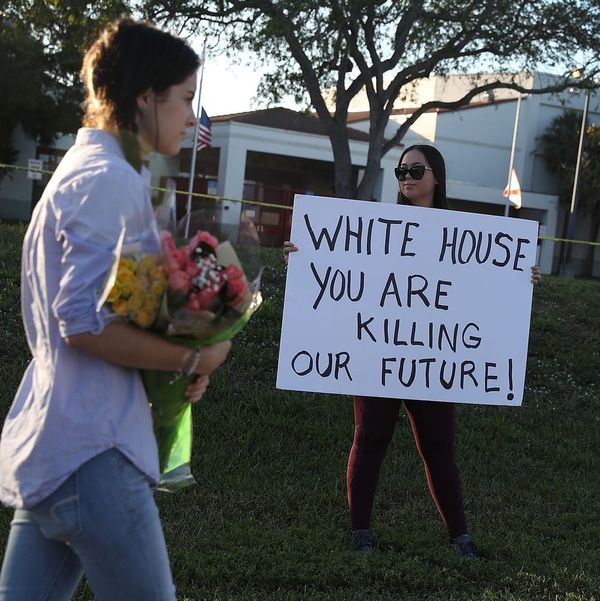 On February 14, a gunman wielding an AR-15 killed 17 people, most of them teenage students, at Marjory Stoneman Douglas High School in Parkland, Florida. The Parkland shooting devastated its surrounding community, and youth across the country have expressed outrage in the handful of days since the tragedy. Through tears and in the aftermath of trauma, Parkland shooting survivors and youth across the country are saying they’ve had enough with inaction from politicians around gun laws. They want real change now — and are organizing three protests to demand gun reform.

According to the gun reform advocacy non-profit Everytown for Gun Safety states that Parkland was the 18th time in 2018 that a firearm had been discharged on K-12 school or college campuses (this statistic was widely misquoted on social media and in the press as being the “18th school shooting” of the year so far). Students, who say they are tired of living in fear over whether or not their school will be targeted next, have made a strong stand in favor of improved gun control and safety laws in the last several days.

Emma Gonzalez, a student at Marjory Stoneman Douglas, made a speech over the weekend that went viral on social media. Through tears, Gonzalez said in her speech that her school will be “the last school shooting” and stated that the school community, “especially students” will fight for real gun reform.

Speaking through tears, Gonzalez called out president Trump for his tweet saying that students and community members need to constantly report disturbing behavior. “We did [report the shooter],” Gonzalez said. “How about we stop the blaming the victims for something that was the shooter’s fault,” Gonzalez added. “The fault of the people who let him buy the guns in the first place.”

Other students spoke out as well, making speeches and speaking directly to the press about their concerns and their demands. Alex Wind, another student at Marjory Stoneman Douglas, told the BBC that “In Newtown, the students were so young they couldn’t stand up, but trust me, we are going to be the change.”

Lyliah Skinner, a junior at Marjory Stoneman Douglas, told CNN, “I feel like as our legislators and leaders, [politicians] shouldn’t be offering prayers and words, we need action.”

In the midst of the rallying cries from students, some of whom had just survived a horrifying tragedy, some individuals and organizations began planning protests. So far, there have been three nationwide calls for walkouts and other demonstrations to call for better legislation that would protect students from gun violence. The demonstrations, led by students and their families, will take place in the coming weeks.

Here are three upcoming protests that have been called by students who are demanding more from elected leaders.

So, what's our plan? On Friday, April 20th, the 19th anniversary of the Columbine shooting we propose a National High School walk out. Don't attend school, wear orange and protest. Sign the petition on our page if you pledge to do so. #nationalwalkout #schoolwalkout

Following the shooting in Parkland, Connecticut high school student Lane Murdock created a Twitter account and Change.org petition calling for a national school walkout on April 20, the 19th anniversary of the Columbine, CO school shooting where 12 people were murdered.

The National School Walkout Twitter account has called for students “to attend school and then promptly WALK-OUT at 10:00 am. Sit outside your schools and peacefully protest. Make some noise. Voice your thoughts.” Walkout organizers have also asked student protesters to wear orange during the walkout. Organizers of the National School Walkout did not immediately respond to a request for comment from Brit + Co.

The Change.org petition is addressed to the US Senate and the President of the United States, and notes that teenagers under 18 do not have the right to vote, leaving them feeling like their voices are “unheard.” The petition also says that president Trump “has not addressed any form of gun legislation.”

march for our lives

On March 24 we will take the streets of Washington DC and our communities across the country to #MarchForOurLives. Sign up at https://t.co/2m7ItdfFjV pic.twitter.com/yokyEdj7Jq

March For Our Lives, another student-led action, is planned for March 24. The March For Our Lives is calling for an in-the-streets protest in Washington DC and around the country on Saturday, March 24, “to demand that their lives and safety become a priority and that we end gun violence and mass shootings in our schools today,” according to the March’s website.

March For Our Lives did not immediately respond to a request for comment, but their website says that more information about the event is forthcoming.

We are Women's March Youth, a group of youth leaders calling for students, teachers, school administrators & allies to take part in a #NationalSchoolWalkout for 17 mins at 10am across every time zone on 3/14 to demand that we be kept safe in our schools. https://t.co/fmZSnhOLUO

Madison Thomas of Women’s March Youth EMPOWER tells Brit + Co that the walkout is being coordinated by several high school and college students, some of whom have been personally impacted by gun violence in schools. During the 17-minute walkout, Thomas says that different schools have different plans: “Some students plan to circle their school holding hands, while others will congregate in their hallways to hold hands, sing, or participate in a moment of silence. Some students plan to speak the names of those killed in Parkland or other acts of gun violence and some students plan to hold a rally. ”

Women’s March Youth EMPOWER is also encouraging people to participate in the National Student Walkout and March For Our Lives, and Thomas says their group will “follow up our walkout by voting out of office any legislator that puts our lives at risk by supporting guns laws and prioritizing the National Rifle Association over students’ safety in schools.”

Are you planning to support any of the student protests? Tell us on Twitter @BritandCo.