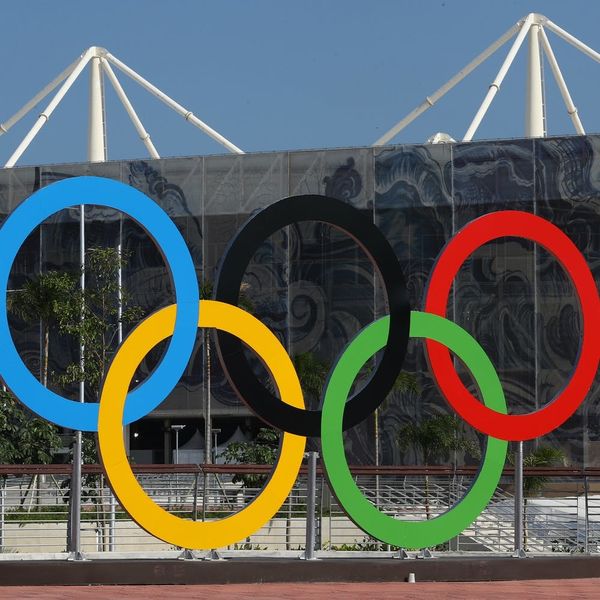 The summer 2016 Olympics are right around the corner, with the opening ceremony set for August 5 — are you all set for your viewing party? — and while we already knew the official uniforms were a prep-lovers dream, team USA revealed its opening ceremony looks on the Today Show, taking things to a whole other level.

With Carson Daly, Cliff Meidl and Sheinelle Jones on hand to model the look, the show gave the world its first glimpse of the getups Friday morning.

Morning cheer on the @TodayShow with @CarsonDaly, @Sheinelle_O and former #TeamUSA flag bearer Cliff Meidl (@PaddlerCliff) as they unveil Opening Ceremony uniforms for #Rio. #RoadtoRio @teamusa From 7/29/16 to 8/6/16, like or share a post with the hashtag #LiketoLight on Instagram, Twitter, or Facebook & The PRL Fdn. will donate $1 (up to $100K total) to Team for Tomorrow, the USOC's community outreach program. Click bio link for program rules.

Featuring white pants, blue blazers and a red, white and blue tee, the uniforms certainly fit with designer Ralph Lauren’s aesthetic: The athletes could easily be headed off to a polo match instead of competition. To put it plainly? They’re yuppified to the max.

One cool focal point of the uniforms, however, is the illuminating flag bearer jacket (the first of its kind) which can be seen in the video the company posted below.

Introducing the Official 2016 #TeamUSA Opening Ceremony uniforms, including the first-ever illuminating Flag Bearer Jacket, which makes its debut on the @Todayshow this morning. #RoadtoRio From 7/29/16 to 8/6/16, like or share a post with the hashtag #LikeToLight on Instagram, Twitter, or Facebook & The PRL Fdn. will donate $1 (up to $100K total) to Team for Tomorrow, the USOC’s community outreach program. Click bio link for program rules.

“[It] will literally light the way for Team USA as they represent our country,” Ralph Lauren’s son David said in a statement.

Love them or hate them, they’re certainly patriotic, and isn’t that what it’s really all about?

Are you a fan of team USA’s opening look? Share with us over @BritandCo!

Nicole Briese
Nicole is the weekend editor for Brit + Co who loves bringing you all the latest buzz. When she's not busy typing away into the wee hours, you can usually find her canoodling with her fur babies, rooting around in a bookstore, or rocking out at a concert of some sort (Guns N' Roses forever!). Check out all her latest musings and past work at nicolebjean.com.
Olympics
Style News
Olympics
More From Style News