Everything You Need for Your Summer 2016 Olympics Viewing Party 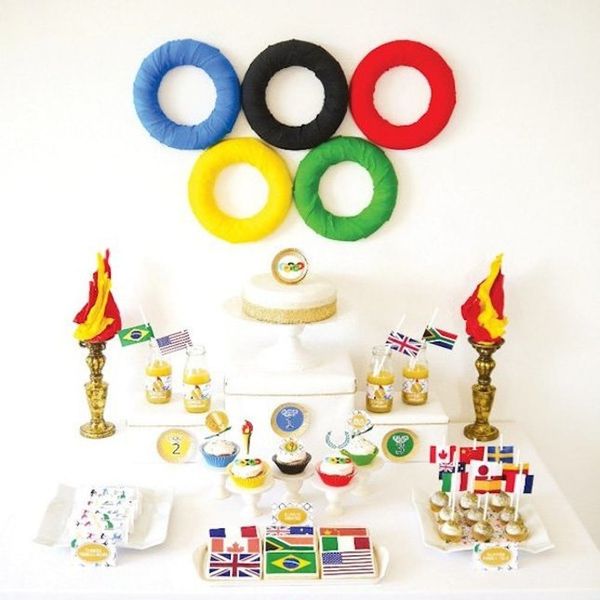 If the US Women’s Olympic Gymnastic Team hasn’t already gotten you hyped for the Summer Olympics, consider kicking off the opening ceremony with an epic viewing party. With only a week before the games begin, it’s now or never to start preparing for the big day! Channel ancient Olympians with hand-crafted laurel head wreaths or don Olympic rings sunglasses for a more modern take. Whichever party ideas you decide to bring to your viewing get-together, make sure it’s one of these 21 gold medal-worthy Olympics must-haves.

1. Printable World Flags Bunting: The Olympic games are an international occasion, so what better to celebrate the world-themed festivity than with world flags? String ‘em up high and hang ‘em all around for an instantly colorful party decoration. (via Mr Printables)

2. DIY Olympic Backdrop and Dessert Table: From the backdrop to the podium centerpiece, everything on this dessert table is grade-A Olympics material. Make sure yours holds up by taking notes from this party. Showcase the Olympic colors against a white table and backdrop for a fresh and modern feel. (via Hostess With the Mostess)

4. DIY Olympic Rings Candy Bar: Here’s an inexpensive way to spruce up your party decor. Stop by your Target’s Dollar Spot and pick up these mini pails or something similar. If they aren’t already colored, just use spray paint in the classic Olympic rings colors: blue, yellow, black, green and red. (via You Are My Fave)

5. DIY Olympic Rings Sunglasses: Impress your friends with these stunner shades made of oven bake clay and strong craft glue. All you’ll need for the base is a pair of inexpensive circular lens sunglasses. If you want to keep them on while viewing the opening ceremony, consider using frames with clear/no lens. (via Hands Occupied)

6. Printable Olympics Games Ticket Invitations: Inspired by Olympics stadium tickets, these editable and printable invitations are sure to win your friends over from the very start. Plus, they’ll make great mementos for your friends to remember your party by once the festivities come to an end. (via Hostess With the Mostess)

7. Printable Drink Flag Toppers and Cupcake Liners: Top off your choice of drinks with these printable flags. The garnish will add a little extra pizzazz to your glasses. For tabletop decor, distribute these “medals” that are made of flattened gold cupcake liners. (via Hostess With the Mostess)

8. DIY Olympic Rings Necklace: This easy and inexpensive craft can double as party favors for all your friends. To make, you’ll need cord in five of the Olympic colors, gauge wire, five rings, jump rings, a chain and a clasp. (via Remarkably Domestic)

9. DIY Laurel Head Wreath: Channel the Olympian in you with this laurel head wreath that looks much fancier than it is to make. Get the look of this simple but chic crown using white card stock, thick wire and gold spray paint. (via Brit + Co)

10. DIY Olympic Medals: Make every one of your party guests feel like a champion with these DIY medals. You can even host a couple games to determine who gets gold, silver and bronze! (via Homemade Ginger)

11. Printable Olympics Mad Libs: Turn a classic game of Mad Libs into a competition for the gold medal (as mentioned above). Winner is whoever comes up with the funniest/most absurd story! (via Kiki & Company)

12. ChocolateChipPrintCo Olympics USA Rio 2016 Invites ($12+): This stylish alternative to the ticket invite above is more upfront about which team you’ll be supporting. Throw in a mini American flag for the full patriotic effect. While you’re at it, it won’t hurt to chant: USA! USA! USA!

13. DIY Olympics Cupcakes: Show love for all the Olympic sports by making these mini cupcakes with fondant toppers. If you don’t want to use cupcakes, just copy the sport designs onto sugar cookies with some fancy piping. (via The Decorated Cookie)

14. DIY Olympics Popcorn Torches: Edible torches are *so* much better than the real thing. Treat your friends to a yummy popcorn and ice cream cone snack while totally nailing your party’s Olympics theme. (via A Small Snippet)

15. WrapPaperScissorsUS Olympic Banner #Rio2016 ($18): Tie the whole look together with this Rio-themed banner. Hang it from the wall for an easy photo booth backdrop or dessert table for a little sprucing up.

16. DIY Olympic Shirt and Torch: Complete your Olympic festivities with a DIY tee and torch. If you’re planning on some down time before the show starts, consider turning this fun project into an activity to enjoy (then wear) with your friends. (via Kate’s Creative Space)

17. DIY Ice Cream Torch: Fire and ice combine in this clever DIY. To make your ice cream torches, wrap gold paper around each cone, secure with tape, then slap on a USA Olympics sticker (optional). (via Pink Pistachio)

18. DIY Olympic Sugared Cocktails: Raise your glasses the Olympian way with colorful sugar-coated rims. Just mix up a batch of your favorite golden cocktail, serve and let the games begin! (via Cupcakes and Cashmere)

19. DIY Olympic Ring Cookies: Sugar cookies covered in M&Ms are pretty much the easiest snacks you can make. You can even borrow the super simple look for your cupcakes too. (via Outnumbered)

20. DIY White Cake Pops: Spiked with Kahlua and vodka and covered in edible gold stars, these tasty Olympics-inspired cake pops are treats your friends will undoubtedly love. For a USA-inspired theme, coat your pops with red, white and blue stars. (via Brit + Co)

21. FiestaSupplies Printable Olympics Photo Booth Props ($7): Last but surely not least, step up your photo booth game with these printable props. This set of 24 props features a Rio-themed variety that’s just what your party needs.

How will you celebrate the kick off of the summer Olympics? Follow us on Pinterest for more exciting party ideas and decor!