How Do I Get Rid of Buttne? 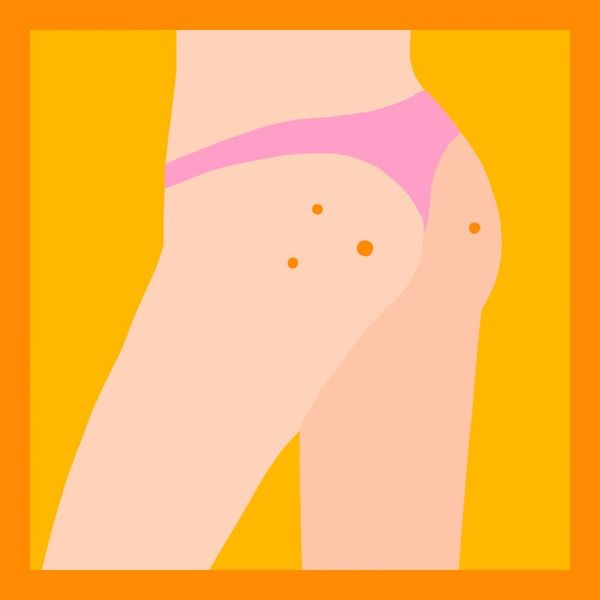 As much as we love swapping tips and tricks to solve our biggest beauty and fashion dilemmas, there are some questions we may not feel comfortable asking our friends about, let alone Google without going incognito. Don’t worry. We’ve got you covered. In this series, we’re tackling those embarrassing queries by turning to experts in the field to get you the answers you need — minus any awkward feelings.

Breakouts are never fun, but they can be particularly embarrassing when they’re on your bum. Part of why they might be so blush-worthy is because many people assume that they’re one of the only people to deal with the dermis dilemma, when in reality it’s a lot more common than you might think. Below, we found out the best ways to get rid of butt acne (AKA buttne) for good.

The same way your face breaks out without proper cleansing, so does your backside. While you likely don’t need to be told to wash your rear regularly, you may be surprised to find out just how diligent you have to be if exercise in yoga pants. Sure, the comfortable AF bottoms make your butt look fab, but unless they’re made of a highly breathable fabric, like cotton, they could be to blame for your latest case of booty breakouts. “Anything that occludes the skin — be it from wearing tight clothing or sweating — preventing it from breathing, can lead to moisture getting trapped, as well as bacteria and yeast growth,” Estee Williams a NYC-based dermatologist and assistant clinical professor in dermatology at Mount Sinai Medical Center says. (Photo via Woman Doing Inverted Yoga/Getty)

It’s that moisture, bacteria and, most importantly, yeast growth that sets cheek flares down below apart from chin breakouts up top. While similar in appearance, acne on the buttocks is often viewed as far more complex than anywhere else on the body. “Those more commonly affected areas [face, back, and chest primarily] have acne caused by the bacteria p. acnes [AKA propionibacterium acnes], along with hormones, oil production, and dead skin cells getting caught in the pores,” Austin-based dermatologist at Sanova Dermatology Ted Lain explains. “When it comes to the rear, however, an inflammatory type of bacteria can form, getting caught in the hair follicle, causing what’s scientifically referred to as folliculitis.” Williams notes that it can also be keratosis pilaris — the spread of tiny red bumps that is actually related genetically to eczema and dry skin, not poor hygiene, tight clothes, or a genetic proclivity for carrying the breakout-causing bacteria.

As with any skincare concern, it’s important to understand the root of the issue to best combat it. If breakouts on your butt are a relatively new occurrence now that you’re working out daily, it may be time to rethink your exercise gear and how quickly you shower post-sweat session. Also consider the cleanser you use when you rinse off (Williams recommends one formulated with benzoyl peroxide or neem as the active ingredient, as they help regulate oil production and clear skin).

On the other hand, if you’ve always experienced blemishes on your behind, it’s time to reevaluate your skincare routine and incorporate blemish-blasting ingredients like glycolic and salicylic acid. Try single-use pads like the Proactiv Clear Zone Body Pads ($35), which have alpha hydroxy acids for superficial exfoliation and beta hydroxy acids for deeper exfoliation, cleansers, creams, and treatments. With regular use, these products can help alleviate inflammation associated with folliculitis, while also reducing the potential for future flares. “A good starting point is to use a benzoyl peroxide (2.5 percent to 5 percent) or neem body wash daily like Himalaya Herbals ($6), followed by a glycolic acid (5 to 10 percent) or salicylic acid leave-on product (1 to 2 percent),” advises Williams.

If you’re not seeing results after two to three weeks, it’s time to head to the dermatologist. “Office treatments such as Intense Pulse Light can fade marks and treat breakouts simultaneously, especially an IPL with a dedicated acne filter such as the Lumenis M22,” Williams says. In addition to professional treatments, dermatologists will also be able to determine if, rather than folliculitis, you’re just struggling with severe dry skin masking itself as such. “If you look at eczema skin under the microscope, you’ll see tiny cracks throughout [that show up as inflammation often confused with acne],” Williams says. As such, a dermatologist will be able to prescribe a medicated cream to use in unison with ceramide-rich OTC creams like Cerave Moisturizing Cream ($13) and, just like that, you can kiss your buttne (or what looks like it) goodbye.

Have any more awkward beauty questions? Let us know @BritandCo!

Rebecca Norris
Rebecca Norris is the Beauty Editor at Brit + Co. With a New York apartment that looks more like a Sephora than a home, she's just as quick to roll up her sleeves to swatch all the best bold lipsticks, as she is to hop in a dermatologist's chair to review a vampire facial. After all, anything in the name of a good story, right?
Asking for a Friend
Skincare
Asking for a Friend Beauty Confessions