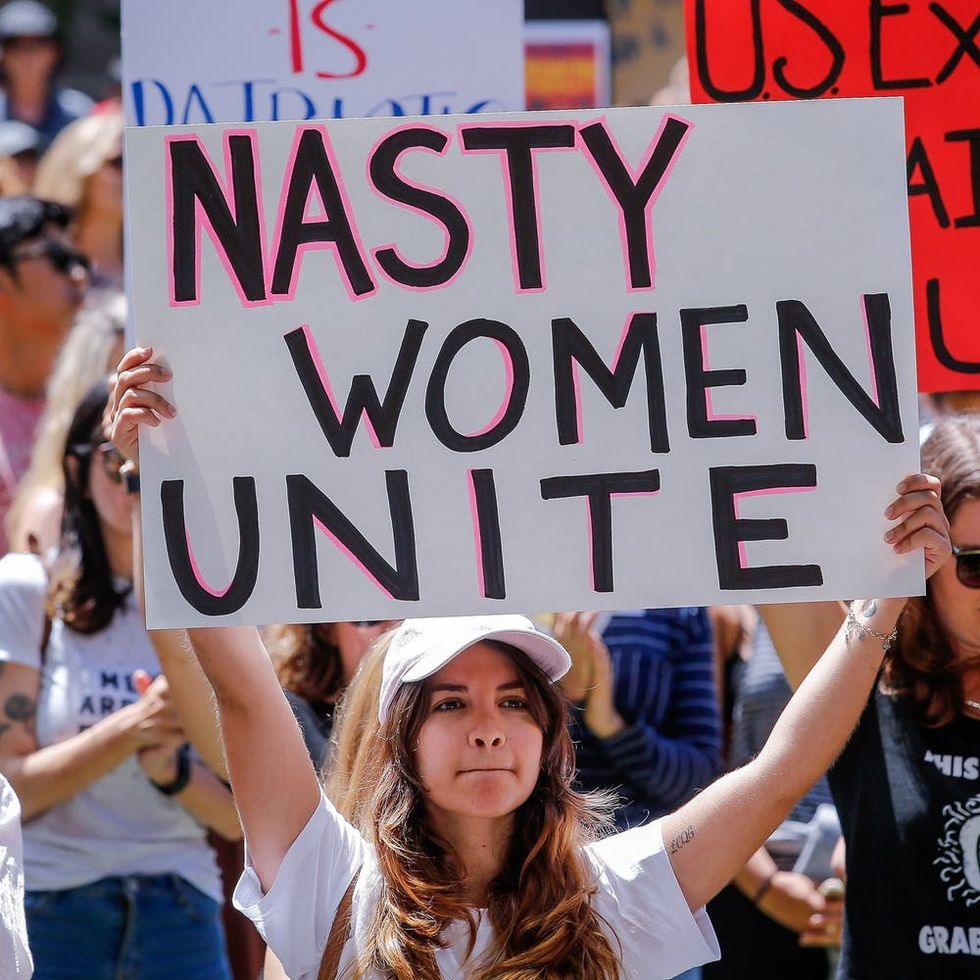 As Donald Trump’s first day in office comes to a close, many are looking ahead to a new day: Namely, tomorrow, when an approximate one million women (including some of Brit + Co’s very own!) will be taking Washington — and other cities around the world, for that matter: Australia already had their march being a day ahead — by storm.

Yet, this is set to be a very different protest than the ones currently making headlines at the moment, with women (and men!) alike already feeling plenty inspired as they make their way to what will be protest ground zero.

Armed with their pussy hats and #NastyWomen merch, this army of female warriors is mighty, and the proof’s in the posts: Check out their inspiring journey below!

My plane on the way to The Women's March on Washington! #jetbluepink#whyimarchhttps://t.co/eg8VDkrkiRpic.twitter.com/oyVN9dmfPW

1. @shanek808: This group of ladies was all smiles aboard their “#JetBluePink” flight.

Unbelievably proud, MY cousin is going to march on Washington DC with a plane full of other proud, dedicated women https://t.co/AnFesc7I0o

2. @kepela: While @kepelawasn’t in attendance on this Southwest flight, her cousin was, repping her VERY proud fam.

Flight attendant asked if anyone was going to the Women's March. Here is our answer! @JetBlue#jetblue724womensmarch#womensmarchpic.twitter.com/WEsxc2MOaF

3. @mmargenot: @mmargenot and her fellow Jet Blue passengers made their intentions heard, loud and clear.

My flight to D.C. right now could almost double as a private jet for Women's March attendees 👏🏼👯

4. @ZoieDiana: @ZoieDiana marveled at what felt like a personal flight to the event.

My flight from ABQ was mostly women, heading to the WOMEN'S MARCH ON WASHINGTON 2017. maybe 80%. Amazing.

5. @bicykel: Even men applauded the ladies’ efforts, with @bicykel giving props where props were due.

6. @kpmagnolia: Making the trip even more special were both the flights and the crews — Southwest airlines went so far as to change its lights to pink for a flight from Chicago to Baltimore on Thursday, as @kpmagnolia gave us a glimpse of. “When your Southwest flight crew celebrate a plane full of kickass women and men going to the Women’s March by lighting it up!” she wrote.

The woman next to me on the plane was handed this by the flight attendant. #WomensMarchOnWashington#WhyIMarchpic.twitter.com/PjlL9H59KR

7. @artistforever: One attendant showed her appreciation in a more personal way, giving this handwritten note to a passenger.

My flight #jetblue flight from PBI to D.C. is 95% women heading to the #WomensMarchOnWashington ❤ pic.twitter.com/kScIeAnkfO

8. @Martha5320: @Martha5320 reveled in the beautiful madness, whooping it up with the group of 95% women on their way to raise some hell.

Everyone on my flight to Baltimore is going to the #WomensMarchOnWashington !!! pic.twitter.com/pO2uaOGZNm

Love a nasty woman flight attendant 👏 Starting our wknd of amazing women because we can't give up! @SpiritAirlines#WomensMarchOnWashingtonpic.twitter.com/bWj89inKtJ

10. @Flor Blake: Yet another attendant on Spirit Airlines asked for a round of applause for all the “Nasty Women on board,” saying, “Just remember, we don’t take no *ish from no man.”

Will you be tomorrow’s march? Let us know over @BritandCo.

Nicole Briese
Nicole is the weekend editor for Brit + Co who loves bringing you all the latest buzz. When she's not busy typing away into the wee hours, you can usually find her canoodling with her fur babies, rooting around in a bookstore, or rocking out at a concert of some sort (Guns N' Roses forever!). Check out all her latest musings and past work at nicolebjean.com.
Politics
Politics
Politicssocial mediawomens march