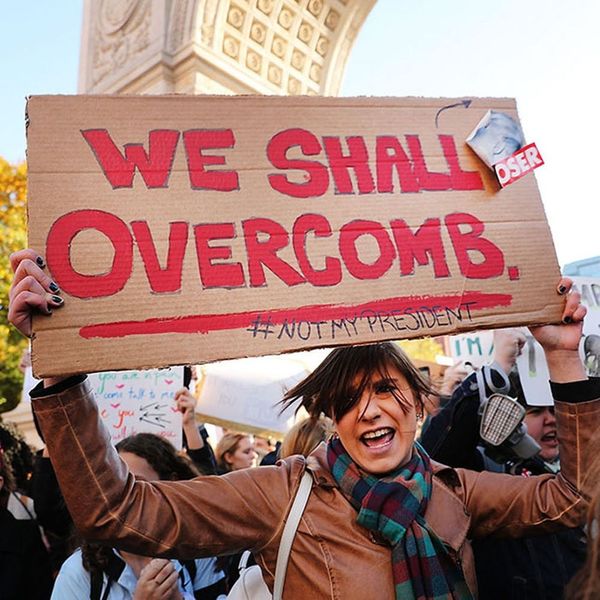 At this point, we probably don’t need to remind anyone about the fact that our President-Elect, Donald Trump, opened quite the can of worms when, throughout his campaign, he was repeatedly accused of sexual misconduct, spent a week attacking a ’90s beauty queen and sparked countless Twitter storms with his references to “nasty women.” And that’s just the tip of the iceberg.

With dreams of having our first-ever female president being startlingly delayed on Tuesday (for the next four years, at least), women across our great country are now refusing to quietly accept the outcome for those very reasons, turning to actionable donations à laKaty Perry and (hopefully peaceful!) protests. But rumor has it that they’re planning to really have their voices heard on the day President-Elect Donald Trump takes office.

Dubbed the Million Women March or the Women’s March on Washington, this growing organized protest of fired-up ladies the world over hopes to bring millions (literally) of women’s rights supporters together to make some serious noise. The event is scheduled to take place on Saturday, January 21, 2017 at Washington, DC’s Lincoln Memorial, as well as other locales across the US. Since its creation on Facebook just two days ago, 42,000+ people have already clicked “attending” as of press time, while another 118K are shown as “interested.” Plus, the page itself has already been shared 246,000 times.

“We need to be working together in a coherent, supportive way over the next four years, to activate more women into leadership positions, to be more politically active,” Bob Bland, one of the march’s organizers, told Reuters. “We cannot allow ourselves to give up, put our heads down and not hold this administration accountable for any violation of human rights or women’s rights.”

Taking to his own personal Facebook page, Bob shared his excitement about how rapidly the event has been growing. “WOW!! Over 150,000 people coming together in #solidarity in under 48 hours- together,” he wrote. “We will transform a profoundly negative week into something intensely positive + healing for ourselves as women, our allies of all kinds and the nation! #staypostive #staynasty #strongertogether #lovetrumpshate.”

It just goes to show that real #girlpower cannot be “trumped.”

Will you be attend the Women’s March in your area? Tweet us @BritandCo.