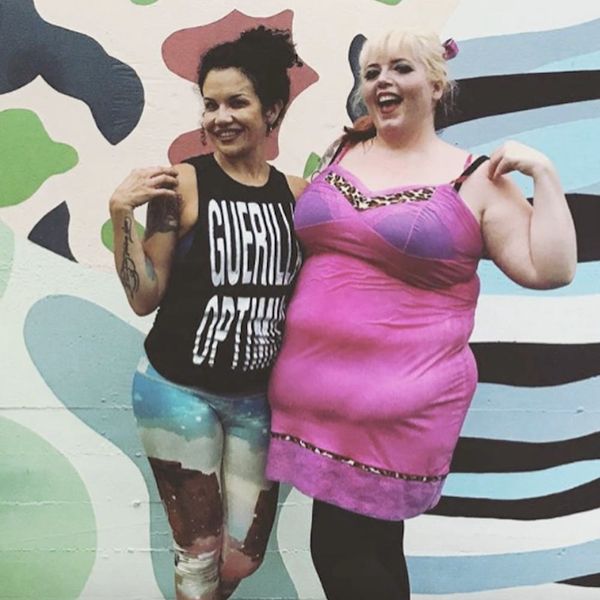 Fat Kid Dance Party, a new body positive dance aerobics class held at EVERYBODY Gym in Los Angeles, has only one rule: There is no wrong way to take part in the class!

Thursday night is lookin' real good!! 👀SPIN with Sevana at 6p (subbing for Shira) & FAT KID DANCE PARTY with Bevin at 7! 🚴🏽🤸🏽‍♀️ • Need a yoga or double down dance fix? Try RISE with Sarah at 7p (subbing for Shira) or MOVE with Jasmine at 8p! Lookout weekend! 🙏💃 • Non-members and all levels always welcome. See all classes here: www.everybodylosangeles.com/classes 🥊

Branlandingham began organizing the dance parties in March 2017 for folks who felt too awkward to dance or had been called “too fat” or “too much” for existing in public. Branlandingham wanted to create a safe, supportive class of dance floor reclamation for these folks by adapting her body positive dance parties from her old home of New York City to this more cardio-friendly version.

Branlandingham shared, “I found out this gym was opening (near me). I had no idea how I could help other than show up and do the positive body image workshops I had been doing for years through my performance and activism in body liberation activism.”

Each Fat Kid Dance Party consists of low-impact cardio and freestyle dancing, including a dance combination, freestyle dance moves, a stretching modality, and healing from pain section. Branlandingham explains that whenever she attended “all level” fitness classes, there was no way that she could do the work that instructors asked of her, and that she’s tried to design a class that helps folks stay confident and affirmed in an environment that is genuinely for all levels.

It was a packed house last Thursday for the Fat Kid Dance Party x @popsugarfitness video shoot! 🎉🎉🎉Repost @queerfatfemme ・・・ A big fat thank you to everyone who came out to Fat Kid Dance Party (For All Sizes to Heal from Body Oppression) last night! The video shoot for Pop Sugar was super fun because of all of you and I can't wait to see how it turns out!!! We party every Thursday 7-8pm @everybodylosangeles #fatkiddanceparty

“The gym and the class are both very safe spaces for folks of all bodies. My whole philosophy is to meet people where they are at. I believe that all bodies are worthy of love exactly as they are; shame has no place in that,” Branlandingham explains.

Seeing so many fat bodies in motion can be artful and, according to Branlandingham, our bodies are actually meant to be moving once every six minutes. Some fat women never risk movement at all because of shame and fear of ridicule and Bevin believes that finding the movement that is fun for you and doing it a few times a week is so helpful for your mental, emotional, spiritual, and physical health.

In the Fat Kid Dance Parties, all bodies are good bodies. “We meet our bodies where they are at and we create a joyful culture around self-care and movement,” says Branlandingham.

Have you ever tried a body-positive fitness class? Tell us about it @BritandCo!

Amanda Scriver
Amanda Scriver is a passionate storyteller and body image advocate based out of Toronto, Canada. When she isn't writing for various publications, she finds time to Keep Up With The Kardashians while partaking in life's greatest pleasure: the chip buffet. Don't ask her what her favorite restaurant is, it's complicated
Body Positive
Womens Health
Body Positive Every Body Fitness