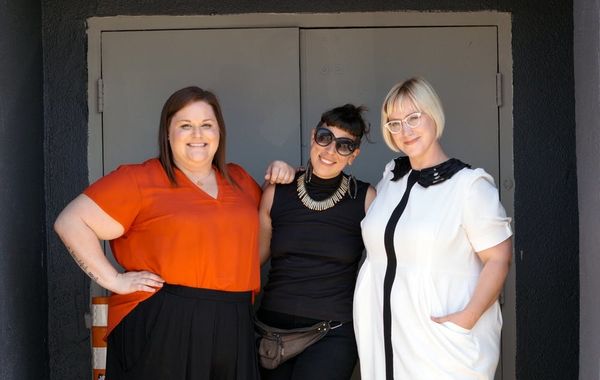 After the birth of her two children, Chicago native Andrea Newberry was having a difficult time finding clothes that weren’t just functional for her newfound momhood but that embraced her new body.

“I sort of felt myself disappearing into motherhood and I felt resentful that not only had my life completely changed but my personal style had to change,” Newberry explains.

Spent the day at my manufacturers getting some NEW stuff set up. Exciting news coming soon!

Inspired by episodes of Project Runway, she decided to throw herself into learning the fundamentals of sewing so she could design dresses that were not just cute, but easy for her to nurse in. Her completed designs were sleek, simple and caught the eye of many after she posted the images on her personal Facebook.

Requests started to pour in from new moms asking Newberry to make them dresses, as well. Soon enough, she sold her first 25 dresses and was able to launch Leche Libre, the stylish and functional modern motherhood clothing line, in June 2015.

Creating Leche Libre was a way to give women the choice to be able to take care of themselves by being able to dress fashionably without sacrificing a specific kind of care to their baby.

Newberry explains, “We live in a world where women are constantly told they need to sacrifice; take care of everyone else with their needs coming last. It’s so important, because as caregivers, we need to take care of ourselves first so we have the strength and endurance to take care of our loved ones.”

Check out rad mama, Sara on our blog where she talks about breastfeeding as a plus woman, being a midwife and having twins! @midwife_sara #breastfeeding #momlife #publicbreastfeeding

Women everywhere are struggling with breastfeeding in public and getting harassed for doing what they need to do to take care of their children. While breastfeeding is more commonplace — especially among millennial women — many women feel embarrassed and fearful of being stigmatized while they breastfeed.

“Seeing babies nursing on breasts make people uncomfortable when viewed from a paradigm where women’s breasts are viewed as sexual objects,” says Newberry. “So although breastfeeding is completely natural, we’re also fighting thousands of years of oppressive thinking and so problems are bound to arise.”

Newberry’s designs allow women to nurture themselves and their baby at the same time by including breast zips that are discreet but straightforward to use. The zippers are large enough that those with varying breast sizes shouldn’t have issues continuing to be the mom they need to be.

With August being National Breastfeeding Awareness month, Leche Libre decided to launch a Kickstarter campaign to help the line return with a new plus-size collection for moms in sizes 16W-26W. Teaming up with plus-size designer Casey Sunich and wardrobe stylist Kat Eves, Newberry is hoping to celebrate the beauty of all bodies by sharing “If you choose to give birth, you’ve just done the most powerful thing a human body can do! This deserves celebration and honor!”

Leche Libre is hoping to raise $12,000 on Kickstarter before Thursday, August 31, 2017. “Producing this collection is really important to me, because it’s such an important part of Leche Libre’s mission to empower women,” Newberry says.

“Plus-size women, who are subjected to so much cultural body shaming, experience double the stigma for breastfeeding in public. I want Leche Libre to be a conduit to plus-size mamas everywhere to celebrate the strength and beauty of their life-giving bodies with fierce functional fashion!”

How do you practice self-care while taking care of others? Talk to us @BritandCo.

Amanda Scriver
Amanda Scriver is a passionate storyteller and body image advocate based out of Toronto, Canada. When she isn't writing for various publications, she finds time to Keep Up With The Kardashians while partaking in life's greatest pleasure: the chip buffet. Don't ask her what her favorite restaurant is, it's complicated
Every Body
Gender Issues
Every Body New Moms
More From Gender Issues