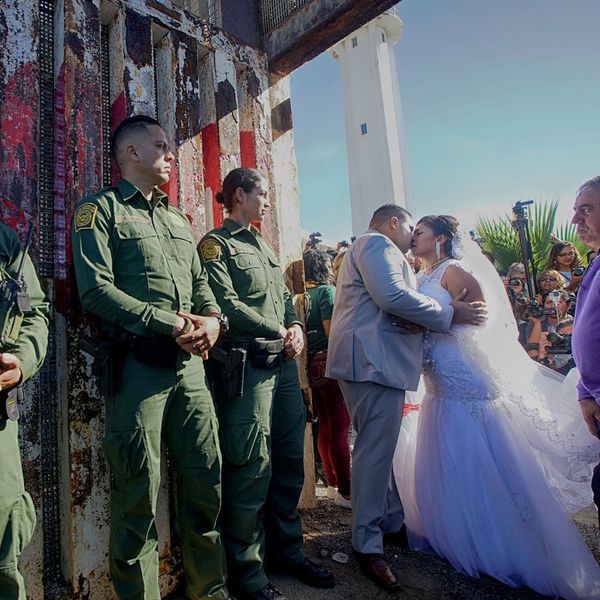 The Border Field State Park in San Diego, California marks the westernmost point of the US-Mexico land border. The fence in Border Field is one where many families on either side of the border meet to speak through the chain and wood. Once a year or so, a point in the wall is opened, and families have about 15 minutes to hug, chat, and reconnect.

The gate, called the Door of Hope, opened on Saturday so that Mexican Evelia Reyes could meet her fiance, American Brian Houston, shortly after the pair signed papers to legally become husband and wife — proving that a border is no match for love.

Tijuana sits just on the other side of the border from San Diego, and Houston cannot travel to Mexico for undisclosed reasons. Reyes, meanwhile, cannot come into the US without a green card. The pair hopes that their wedding will get the immigration process started so that they can live together in Houston’s hometown of San Diego.

“It’s a statement that love has no borders,” Houston told the San Diego Union-Tribune. “Even though we are divided by a giant fence here, we can still love each other on both sides of the fence.” Saturday’s opening of the Door of Hope was only the sixth time since 2013 that the door has been opened to families hoping to reconnect from either side of the border.

Houston and Reyes worked with an organization called Border Angels, a non-profit volunteer organization that fights for humane immigration policies, and helps petition the State Department to have the Door of Hope opened. Apart from the newlyweds, the Union Tribune reports that a handful of other families had a few moments to connect through the gate on Saturday, as well.

The Door of Hope sits just 15 miles away from an area where President Trump has erected eight prototype walls near Otay Mesa. With no current funding model, there is no real timeline as to when the border wall will be built.

Have you ever had a partner in a different country? Tell us @BritandCo!

Kat Armstrong
Kat has been a writer, social media maven and mom for longer than she's willing to admit. She's also spent time in front of and behind the camera, interviewing celebs, politicians and acting as a producer for fashion and artistic photography shoots. When she isn't writing for various orgs and publications, she's hanging with her kids, husband and French Bulldog, Peter, in Toronto, Canada.
Immigration
Current Events
Immigration Weddings
More From Current Events