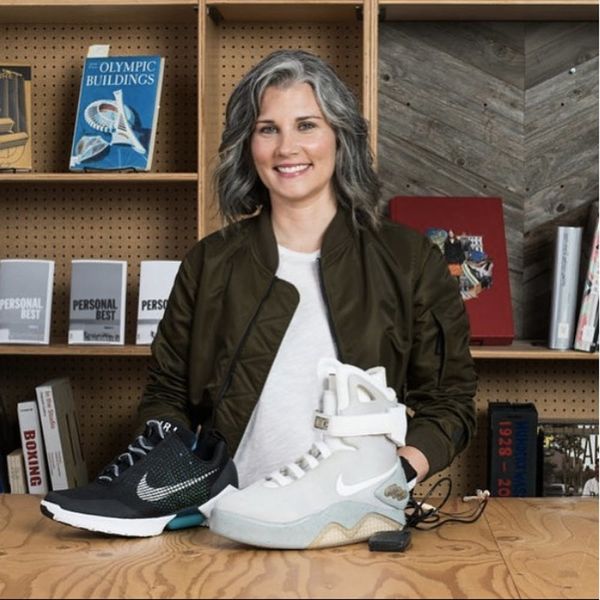 Along with hoverboards, self-drying jackets, and food hydrators, Back to the Future II promised us self-lacing sneakers. The 1989 movie even set a deadline: 2015. When the date for the shoes’ predicted IRL debut came and went (with us still bending and reaching to tie our own damn laces), the VIPs at Nike decided it was time to press fast forward on their Marty McFly-inspired R&D work.

Enter: plastics engineer Tiffany Beers, brought into the sneaker company’s Innovation Kitchen as the team’s Senior Innovator, who was put in charge of making pop culture’s most popular running shoe of the future a reality (hoverboarding skills not included).

The Nike HyperAdapt 1.0 (AKA the Back to the Future shoe) landed in select stores last year. It works exactly the way you’d think it would: tiny sensors inside the sneaker “feel” you put your foot in, signaling a high-tech lacing mechanism to automatically tighten the laces, no bunny ears required. Beers nailed the design in under five weeks, NBD.

Whoa, Im in the New York Times today. 🤓check it out and let me know what u think. Writer: @katierosman #thankyou also a big thanks to @jodances 👍link in bio. #nyt #women #engineer #careervibes

There are two reasons that the shoes are a big deal (like, for people outside the circle of sneakerheads willing to shell out upwards of $700 for a pair). The first is that, like the New York Times points out in their profile of Beers, sneaker culture and sneaker design is a world dominated by men. Putting a woman in charge of the mega-hyped HyperAdapt project is a big step toward opening the door to more diversity in a world that’s remained pretty insular (read: male).

“My whole life has been competing with the boys,” Beers told the Times, making it clear that she didn’t feel any added pressure to make sure that her shoes were a success. And they already are, but for Beers, their real potential still lies ahead. “There are a chunk of people who can’t tie laces,” she says, “and that is a big deal because they are spending 20 or 30 minutes a day putting on and taking off their shoes.”

Beers is referring to people with limited mobility. Consider a person in their seventh month of pregnancy, someone with a spinal cord injury, or someone with severely arthritic hands — or, poignantly, someone with advanced Parkinson’s, like actor Michael J. Fox, who brought Marty McFly to life.

There’s actually a long, long list of reasons why tying your shoes could become a serious chore. It’s one of those small, daily things we don’t think about until we can’t do it. Then it seems monumental. Beers’ hope is that once the cost of the technology goes down, the shoes will be affordable to people who will really benefit from them — in ways that go far beyond looking totally (Marty Mc)fly.

Are you a serious sneaker collector? Tell us about it on Twitter!

(Photos via Universal and Nike)

Corrina Allen
Corrina Allen is a film + television + travel writer from Toronto. Her journalistic goals include a backstage interview with David Byrne, the fictional character she identifies most closely with is John Wick, and her favorite dead person is Vladimir Nabokov. She never, ever Instagrams photos of her food (just her dog).
Ladies First
Diversity
Ladies First
More From Diversity