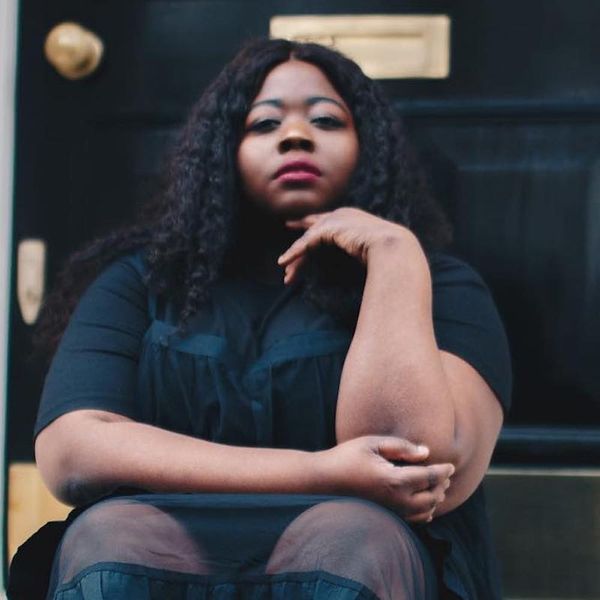 The body positivity movement reached the mainstream in a major way in 2017. While the increased representation of diverse bodies in everything from fashion retailers to magazines and newspapers is no doubt important, the movement’s visibility has also left it open to misinterpretation. One blogger noticed a disturbing trend emerging in the conversation and, in choosing to speak out about it, issued an important reminder of the meaning of true body positivity.

Later on today I’ll be uploading one of the most personal blog posts I’ve ever written, and it’ll be my last post of the year. Stay tuned. ❤️ 📸 - @sarahellen_photography

Plus-size style and lifestyle blogger Stephanie Yeboah (aka Nerd About Town) recently took issue with the title of an upcoming book by Made In Chelsea star Louise Thompson. Called Body Positive, the book is said to detail how Thompson “transformed from anxiety-ridden party girl with a destructive relationship with food and little concern for her health and happiness to someone who has found peace, direction, and self-love through nurturing herself.”

The book promises to share some of the author’s favorite workouts and recipes, something that Yeboah — and manyothers — saw as co-opting the trendy body positivity term to sell a “fitspo” lifestyle.

“Body positivity is/was a movement that was created to celebrate bodies that were seen as outside of what is conventionally attractive,” she wrote in a series of tweets. “More specifically: fat bodies. Body positivity is NOT about celebrating the diet industry.”

While Thompson’s publisher says the book is ‘”not a weight loss or diet book in any way, shape or form,” Yeboah sees it otherwise.

“The actual intention of body positivity is not ‘any action that makes you feel positive about your body,'” she continued. “The intention is size acceptance. What about this book screams ‘size acceptance’? It’s just another way for people to make money off the marginalised…If @LouiseAThompson wants to promote her diets and workouts, fine — but do not use it in the name of body positivity.”

🤭I am SO EXCITED to announce that I’ll be bringing out my first book in May next year !!!! 📚📖 After a lot of deliberation I have decided to call my book ‘Body Positive’ because I think this best reflects the changes that I have made to my life and my mind and body over the past few years. You guys know how obsessed I am with cooking and eating (and training) .... sooooo I will be including my favourite 15 minute home workouts (manageable - im really impatient), WITH some delicious recipes and insider scoop (my tips) to help you guys transform your approach to fitness and food. I want everyone to be able to make changes to build a strong body and mind to be proud of. And I always get soooo many requests from you guys for my workout regime/food diary so I thought it would be a no brainer. As many of you have followed my journey over the past 8 years 📺 you know I haven’t always shown myself a lot of love or respect and I CERTAINLY never had a flat tummy. I wasn’t particularly happy but now I am and I want to share my own personal journey and all the ups and downs with you. 🔑🔐 I’m currently locking myself away writing it so if there’s anything you desperately want me to include please comment below or write to me. 🤓

“It’s basically at this point, like, ‘Fat girls should have clothes too!’ which is completely belittling this idea of, ‘All humans are as they should be,'” she said. “Visibility is really important, and it does make a difference. But the biggest thing is [the media] just reflects what we do. So if we tell them that what they’re trying to sell us is watered-down bullshit, and it isn’t actually body positivity, it will gradually become more reflective of what the movement actually is.”

Yeboah, however, seems less optimistic. “Can we not have our own safe spaces where we can celebrate what makes us unique, without smaller/slimmer people infiltrating it and trying to turn it into something else?” she asked. “The movement has forgotten about the very bodies it was created to protect.”

Do you agree that “body positivity” is turning into something it’s not? Let us know @BritandCo.