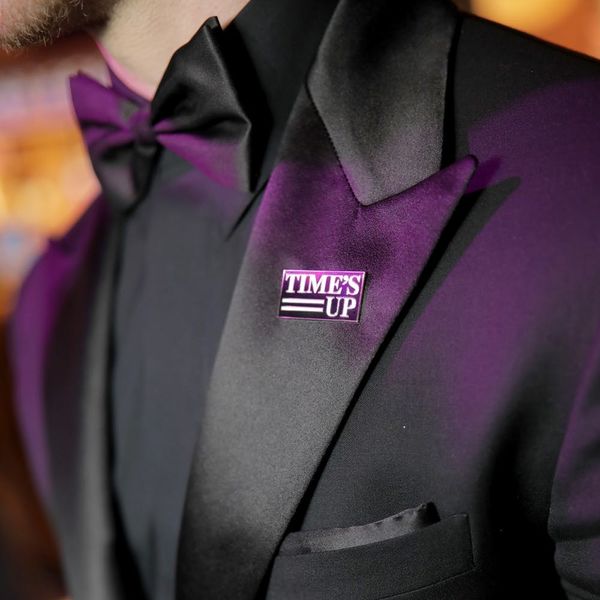 Many of Hollywood’s leading women have recently been united and vocal regarding the sexual abuse they and their colleagues have endured, and last night’s Golden Globes award ceremony was no exception. Stars including Kerry Washington, Reese Witherspoon, Oprah Winfrey, and Natalie Portman (to name only a small handful!) wore black to the awards show to raise awareness for Time’s Up, a new initiative that will push for gender equality in the film and TV industry, and also raise money for a legal defense fund for working-class women who are the victims of workplace sexual abuse. TIME’S UP has already raised more than $16 million for its legal defense fund.

In an open letter published in the New York Times on New Years Day, over 300 women in Hollywood, from actors to agents and lawyers, expressed solidarity with the members of the Allianza Nacional de Campesinas (the National Farmworker Women’s Alliance) who wrote a letter of support to survivors of sexual abuse in Hollywood. The letter called attention to abuse perpetrated against women who work low-wage jobs, women of color, immigrant women, and LGBTQ women, and the fact that limited resources and fear of losing much-needed income can make it even more difficult for the most marginalized women to speak up.

When Time’s Up launched, the women behind it put up $13 million for the legal defense fund, and now, Time’s Up has raised over $16 million through a GoFundMe campaign. According to the GoFundMe page for the fund, Time’s Up has a $16.5 goal, which is nearly complete thanks not only to donations from the women who launched the initiative, and members of the general public who have also pitched in.

When the fund reached the $15 million mark, Reese Witherspoon posted a video to her Instagram account featuring herself, Kerry Washington, Tracee Ellis Ross, Rashida Jones, Brie Larson, and Tessa Thompson to express their thanks to everyone who has contributed to the fund. More than 15,000 people from all 50 US states and at least 60 countries from around the world have contributed to the fund. In the video, the actresses added that they were not only wearing black to the Golden Globes in order to raise awareness for Time’s Up, but as Kerry Washington said, “to stand with you, our sisters, from across the globe.”

TODAY is a Big day!!! JOIN US! #TIMESUP on abuse, harassment, and the imbalance of power. Not just in Hollywood, but every industry! We stand together. Today, join us : Wear Black! Post pictures! Tag us! Use the hashtag #WhyWeWearBlack and tell us why you stand with @TimesUpNow. @traceeellisross @rashidajones @kerrywashington @brielarson @tessamaethompson

The legal defense fund is run through the National Women’s Law Center, a DC-based non-profit organization that supports legislation and policies that promote gender equality. According to the NWLC, the fund will “help connect individuals facing sexual harassment or related retaliation with legal representation and provide resources to help fund that representation.” This way, women who lack the financial means to speak up about abuse in the workplace will now have access to some of the resources they need to keep themselves safe at work.

For now, details regarding who will be eligible to receive assistance through the legal defense fund are limited. According to a statement on the NWLC website, the Center is “currently establishing criteria to determine eligibility for financial support from the Fund and in the coming weeks will follow up with those who have contacted us about workplace sexual harassment and sexual harassment-related retaliation with information about how to seek this support.”

Though it’s not yet clear what the criteria might be, and the NWLC was unavailable to provide comment for this article, the initiative’s language has remained focused on assisting working-class women.

Specifics about who will qualify for help are still pending, but the NWLC is already accepting requests for assistance from the legal defense fund. Those who need legal and financial help taking on sexual abuse at work can fill out a form available through the Time’s Up website. There’s more than $16 million currently available to help vulnerable women seek justice, and it’s just a matter of time before the funds are put to excellent use.

Elizabeth King
Elizabeth King is a politics, history, and culture writer based in the Twin Cities. She is generally pretty cranky but still enjoys traveling, music from the early 2000's, and plotting the resistance. Feel free to say hi on Twitter at @ekingc or check out some of her work at www.elizabethcking.com.
Golden Globes
Empowerment
Golden Globes
More From Empowerment