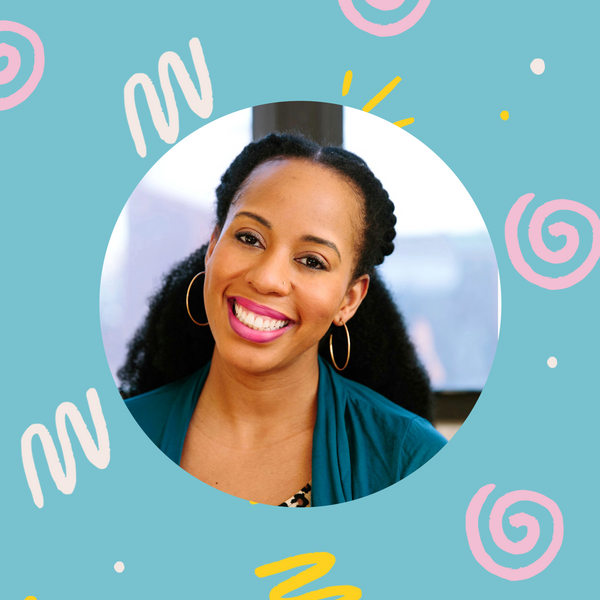 Welcome back to Selfmade Stories! We're partnering with Office Depot to spotlight emerging entrepreneurs from our Selfmade virtual business course. A.V. Perkins, founder of University of Dope, the first party card game dedicated to hip hop culture (love!), shares how she evolved her brand over time by testing and learning, how she outsmarted a "copycat," and how she got Method Man and Wu-Tang to test out her product. For real.

B + C: What inspired you to start University of Dope?

A.V.: My business partner and I went to college together but we didn't start it then. It was when she came to visit me from Connecticut. I asked her if she could name all the members of the Wu-Tang clan. And she said, yes. And I didn't believe her. And I said, "Could you name them all if you've been drinking?" And she also said yes, and I still didn't. I still don't believe her to this day. And we Googled "hip hop card game" because we figured everything exists at this point, but it didn't! So we made it up.

A.V.: I'm a big music fan. I love all types of music. My family is Caribbean. They emigrated from Jamaica. So I'm first-generation born and music was always around me growing up. I like 80s, rock, pop rock, you name it. But hip hop is just another art form that I enjoy.

B + C: Who is your favorite hip hop artist?

A.V.: Biggie would be my favorite.

A.V.: We sell on Amazon, Uncommon Goods and a couple of brick and mortars, but we're always looking to expand. We also do vending events, especially game nights. And now that the world is opening back up, we can actually return to festivals again.

B + C: How has the game evolved since you launched?

A.V.: We're coming out with a new R&B deck, but we always take surveys and every time we do a new shipment, we look at which ones are performing. There's a lot of things that we learned along the way. For instance, when we first created it, there were some artists that we put in there that, for lack of better words, were one-hit wonders. So no one knew who they were. We didn't want to keep running into that issue with the deck, so we made a hard line on who could be in the game, especially since the game is designed for older millennials. So we can't put too many of the TikTok people in there, because we don't know their fate.

B + C: What challenges did you face initially when launching the game?

A.V.: Here's the thing. Someone tried to steal our idea in the crowdfunding phase. So it was actually someone I reached out to who did game nights and they were an influencer. She tried to create a game, but the problem was, people were like, "Hey, is this your game?" It was the same colors and everything. Thankfully, we had everything legal. We sent cease and desist letters but it costs so much money even to send cease and desist letters. We decided to end our crowdfunding early and go to market a month early in November. And we just did pre-orders. The crowdfunding was essentially for marketing and getting ourselves out there.

B + C: Did that end up being a good thing, considering it was right before the holidays?

A.V.: It was. I had a demo deck and I would go to game nights and different events and people were signing up and wanting to pre-order and then we got our shipment in right before the holidays.

B + C: What would you say have been your top three successes so far?

A.V.: First, we had a really major activation in our first year with Afropunk out here in Brooklyn, a big festival. Solange was also performing that year and they sponsored our booth. It was an awesome event. It is still one of my highlights to this day. That was in 2017. Another one was watching some of our favorite rappers play our game, so watching Method Man play and he's (one) he's just gorgeous, but two, the game started because of Wu-Tang and seeing him play and enjoy it. It was like, wow, something that we created from randomly talking to each other became like this whole thing. And the third one...

B + C: So the performers were actually playing your game?

A.V.: Yeah! And other rappers have played. So it's really like, 'oh wow, this is dope.' No pun intended. More recently I would like to say placing in the Selfmade competition because that was my first time pitching in a pitch competition, and then placing was an awesome, awesome thing.

B + C: Have you always been a creative person? Where do you get your inspiration from?

A.V.: My background is in film and television. I did props for set decorating for 10 years. And even as a kid, I wanted to be an actress. I still do. My parents always encouraged me and my siblings to think outside of the box. You can do whatever it is that you want to do, including play with glitter for a living. Because that's what I do by day [she is also the founder of the DIY site A.V. Does What], and then make hip hop card games by night.

B + C: You've gotten a lot of press already, including NBC, Essence, Esquire and Huffpost. This is something that a lot of entrepreneurs struggle with. What were some strategies you used to market your brand?

A.V. It's constantly putting yourself out there. You have to compete with so much noise on the Internet. If you want people to know what you're doing, you have to talk about it all the time. You have to have the willingness to repeat yourself. I don't have the bandwidth to be in every business Facebook group to tell people what I do. But if people know you and know what you do, they can be like an evangelist for you. Clubhouse also helped me a lot. That's how I met Brit, so that definitely worked in my favor.

B + C: What did you find most valuable out of Selfmade?

A.V. The networking is definitely top-notch because you have 10 weeks or so of meeting people who are from all over the country. You can meet more like-minded people and they can help you. You can help them. And then that synergy is just awesome. The guest speakers were great. I am a Joy Cho stan. Like I love her dearly. So every time she spoke, I was there with all ears open because she's doing things that I would like to do and same thing with Brit. Having that closer communication than you would from just clicking "Like" on their Instagram was something definitely beneficial to me. And my coach was great. Amazing.

B + C: What keeps you motivated when things get hard?

A.V.: I have nieces and a nephew who I love dearly and I want them to think that 'Auntie AV, she does what she wants. I don't have to do things because people want me to do it. I can go my own path, go my own way.' One of my nieces is eight now, and she just said recently to me, "I want to grow up and be like you, I want to live your lifestyle." I'm like, you're teaching the kids words like lifestyle now? That's great.

B + C: What's next for University of Dope?

A.V.: Oh my gosh. A lot of things. We do private events. We have one coming up with Sony and Bleacher Report, which is awesome. We have our virtual game show, which we started at the beginning of the pandemic. It has opened up an entire revenue stream for us, including doing the private virtual event. We also started a guerilla marketing program where we just go out with large printouts, like card stock versions of the cards, and hold them in the street and people react to it and we get that footage and put it on social. So just creating an entire lifestyle around it.

B + C: You're also an HGTV digital host, right?

A.V.: I've been with HGTV Handmade since February 2020. I've done a lot of on-camera stuff because of it. And shortly after Selfmade, I was on the Drew Barrymore show. I did a furniture flip.

B + C: That's really great! So you received an Office Scholarship to Selfmade. How has that helped you grow your business?

A.V.: The scholarship really helped me. One of the prizes from the pitch competition was a gift card from Office Depot. And that has certainly helped both of my businesses flourish because we need that for marketing material: the flyers, printouts, banners, all of those things. We need business cards too, so it's certainly helped.

B + C: Any final words of advice for other entrepreneurs just getting started?

A.V.: Put yourself out there. Women especially tend to have an amazing idea and we kind of skirt around it saying, 'Well, you know, I'm working on a little project or it's a new little class called Selfmade.' It's not little, it's 10 weeks of your life. This is major. Then they'll have these ideas and they won't describe it with the zeal and the zest that it deserves. Unfortunately, our humility is not rewarded in this world. It just sounds like you're not interested. If you're not interested in your idea, why should I invest in your idea?

Thanks A.V.! You can follow University of Dope @universityofdope and A.V. Does What @avdoeswhat

Whether you're just noodling on an idea or a few years into building your business, Office Depot OfficeMax can help turn your next big idea into a reality with a suite of business services to help you accomplish more - from signs, posters & banners to get your business noticed to marketing materials to bring your brand vision to life.

Head to Office Depot's Selfmade page to check out even more amazing business resources (and discounts!) to help you accomplish more on your entrepreneurial journey. These offers are available for a limited time only, so be sure to take advantage of all this goodness while supplies last. Want to join the next Selfmade cohort? Check out all of the scholarship details right here.