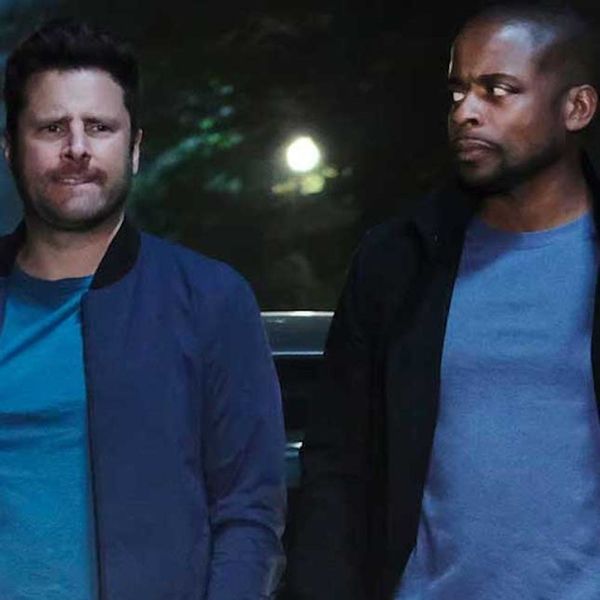 Christmas has come early for Psych-Os, because USA’s Psych: The Movie just premiered and there’s no “I’ve heard it both ways” about it — it was awesome.

The movie picks up three years after the series finale. The gang all live in San Francisco — minus Lassiter (Timothy Omundson), who is still down in Santa Barbara. Shawn (James Roday) and Juliet (Maggie Lawson) are still engaged, though things have stalled out a little bit between them. Chief Vick (Kirsten Nelson) is a little bored by her job, and Henry (Corbin Bernsen) is kind of a hipster.

And of course, Gus (Dule Hill) waited all of 11 days before he couldn’t handle the uncertainty of the detective lifestyle and found himself a job as a pharmaceutical sales rep. But he and Shawn still work cases together, and they quickly get embroiled in a hot one when Juliet’s new partner is shot in his apartment and his SFPD security device is stolen.

It turns out the baddie is a cockney-accented bleached blonde named McGoldrick (Zachary Levi, in an outstanding guest-starring appearance). He appears to be specifically targeting Juliet because he snitched to her on dozens of criminals and then she put him in jail anyway. I say “appears to be” because that’s not the whole story.

After McGoldrick kidnaps the chief’s daughter, Iris, there’s an excellent reveal when McGoldrick is shot dead. Guess who is really the one out for revenge against Jules? None other than Allison Cowley (Mena Suvari), AKA Mr. Yin’s apprentice, whom Juliet took down back in the season 5 finale.

Suvari was definitely the highlight because it was such a great surprise, but there were scores of other familiar Psych faces who popped up in the movie — Ralph Macchio, Carlos Jacott, Sage Brocklebank, John Cena, even Jimmi Simpson. Yes, that’s right — Mary Lightly, who was killed in the “Mr. Yin Presents” episode, appears to Shawn in an awesome dream sequence.

After the bad guys are thwarted, Shawn finally gets back the ring that he proposed to Juliet with (remember, it was stolen during the proposal) and the two get married right on the spot. Then the cherry on top is when Ewan O’Hara (Cena) drops by the new Psych office and he and the guys make a run for it, being pursued by unknown operatives. It leaves the door wide open for another Psych movie, and honestly, this one was such a treat that I would wholeheartedly endorse a second.

The old magic was there in spades — Shawn and Gus are the heart of the show, and Roday and Hill haven’t missed a step in the chemistry department. It was also nice to see that Karen and Juliet still have their magic too. And of course, Kurt Fuller appearing as Woody was a nice way to round out the cast since Omundson couldn’t really be a part of this project.

In case you didn’t know, Omundson suffered a stroke in late April and has been working on rehabilitation ever since. They wrote a video chat scene for him and Lawson, which was great.

Overall, two pineapples up for Psych: The Movie. Fingers crossed they decide to do another one.