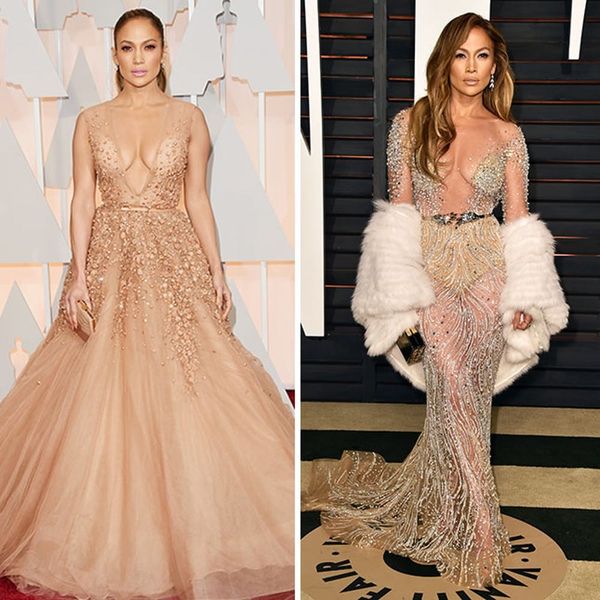 Color, embellishment and lots of leg defined the best dressed set at the 2015 Oscars. We even saw some stars top their personal best on last night’s red carpet (Lupita’s 6,000 pearl-strong embellished dress almost made us completely forget about last year’s duck egg blue). So, when it came time for Hollywood’s finest to change up their looks after the show for the Vanity Fair Oscar Party, we had high hopes that they’d take their sartorial statement making to the next level. Surprisingly though, stars set an ultra classy tone for the night in blacks, whites and neutrals and to be honest, we’re torn over the results. On one hand, the more formal feel actually elevated some of their main show style missteps (we’re looking at you, Chloe Grace Moretz). But on the other, without the flirty, pop-the-champagne details that we expect from party-ready looks, it felt like a bit of a snoozefest. Sound off below on which stars you think nailed — and failed — the Oscars after party dress change.

1. Lupita Nyong’o: Lupita stuck with all-over embellishments in a second beaded Calvin Klein Collection gown in a nude metallic hue. The texture and sheen makes it a head-turner in any setting, though we do miss the pop of color we’re used to getting from the Oscar winner. Let’s just say we’re dreaming of the same gown in a glowing daisy yellow. (Photos via Jason Merritt/Pascal Le Segretain/Getty)

2. Marion Cotillard: The feminine whimsey of Marion’s polka dot Dior gown carried over on her flouncy Giambattista Valli dress, which felt like the most party-ready of the post-Oscars costume changes. The flared drop-waist silhouette was striking, the glitz felt fun and best of all, there was color. (Photos via Jason Merritt/Pascal Le Segretain/Getty)

3. Felicity Jones: While Felicity stuck with the same high neckline, there was a major difference between her Alexander McQueen ball gown and post-show Saint Laurent frock (no, not just the color): the latter didin’t wear her. With sweetly swept bangs and bling to match her embellished collar, the figure-hugging dress felt fresh, even a little edgy — look we’d love to see more of on the Oscar nominee. (Photos via Jason Merritt/Pascal Le Segretain/Getty)

4. Naomi Watts: Let’s get one thing straight: we LOVE a pantsuit on the red carpet. But given we’ve seen so many great ones this award show season (think: Jennifer Aniston at the Critics’ Choice Awards and Emma Stone at the Golden Globes) — and the fact that Naomi Watts killed it in a trendy silver bib top Armani gown complete with black bandeau — her all-white Armani suit was a bit of a let down. We say save it for a more #Girlboss-appropriate moment. (Photos via Frazer Harrison/Pascal Le Segretain/Getty)

5. Chloe Grace Moretz: There weren’t a ton of things that could save Chloe Grace Moritz’s washed-out, weighted down Miu Miu dress (definitely not that pose). So, we were delighted to see the young starlet change into an airy, boho-style frock complete with floral lace details and gorgeous balloon sleeves. (Photos via Jason Merritt/Pascal Le Segretain/Getty)

6. Jennifer Lopez: Jennifer Lopez’s outfit got even more Jennifer Lopez for the Oscars after party, sticking with the deep plunge of her massive Elie Saab Haute Couture gown, but going sheer nearly everywhere else in elegant yet revealing Zuhair Murad Couture. Just look at that smize: she is feeling it — and so are we. (Photos via Jason Merritt/Pascal Le Segretain/Getty)

7. Solange Knowles: We hate to compare the Knowles sisters, but we can’t help but think Solange leaned a little too Beyoncé in her post-Oscars gown that felt almost identical to Bey’s Michael Costello Grammys gown. We know Solange can rock white like nobody’s business (have you seen her wedding photos?), but this particular gown just didn’t feel funky enough for the sartorial statement maker. (Photos via Jason Merritt/Pascal Le Segretain/Getty)

8. Jessica Chastain: The only thing that could top Jessica’s va-va-voom Oscars dress was this: the embellished frock she wore to the after party was designed by H&M. For real… and it gets better. As part of the H&M Conscious Collection, the dress was made from sustainable materials and will be available to purchase from the Swedish retailer, presumable at a non A-lister price. (Photos via Jason Merritt/Pascal Le Segretain/Getty)

9. Lady Gaga: Gaga brought the drama to both carpets, which ended up playing out in a sort of good versus evil sartorial showdown. In terms of what worked better, we’re sticking with her debut Oscars look soley because there’s no one who could pull it off but Gaga. We could totally see Mila Kunis, Angelina Jolie or Karlie Kloss working that inky black number, but who else would be caught on the carpet with those red gloves and paper doll sleeves? (Photos via Jason Merritt/Pascal Le Segretain/Getty)

10. Keira Knightley: This award show season has solidified Keira as the red carpet’s real life angel in ethereal gown after ethereal gown, and this time around in a flowing embroidered Valentino number, it was no different. That’s why her after party dress left our jaws on the floor. The navy velvet Valentino version was a complete departure that created an unexpected and totally memorable red carpet moment. (Photos via Jason Merritt/Pascal Le Segretain/Getty)

Are you Team Oscars Style or Team After Party Dress? Tell us who you think was best (and worst) dressed of the night in the comments below.

Social media is an amazing free marketing tool that didn't exist 15 years ago. Particularly with Instagram, you can use a few images and words to tell followers who you are in an instant. While we can't share *all* the things we covered in this week's Selfmade master session on social media and brand voice, as part of our collaboration with Office Depot we're sharing a few key takeaways.

20+ Sustainable Gifts for an Eco-Friendly Holiday