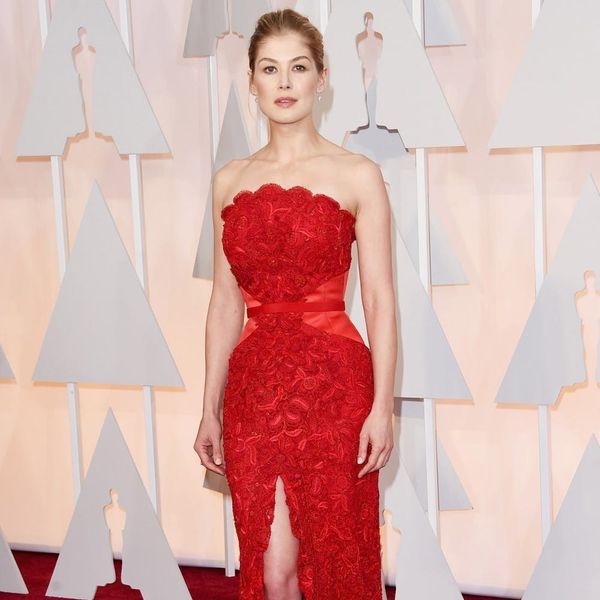 This is IT, folks — the grand finale of award show season. We kicked things off strong back in January with the Golden Globes, got a little funky at the Grammys (Madonna, we’re looking at you) and now we’re headed straight into the heart of red carpet fashion at the 2015 Academy Awards. We can’t wait to see who walks away with a little gold man, but first things first: the dresses. From elegant ombré to a chainmail-esque gowns, here are our favorite looks from the star-studded evening.

1. Julianne Moore: A frontrunner for Best Actress, Moore kept with the embellished theme she’s been sporting all award season in this beautifully crafted white and black strapless piece — made by Karl Lagerfeld HIMSELF especially for her. You win, Jules. (photo via Jason Merritt/Getty)

2. Lupita Nyong’o: While Lupita’s 2015 Oscar dress isn’t quite as dramatic as that duck egg blue Prada stunner she wore last year, her Calvin Klien pick for this year was decked out with 6,000 pearls and that’s pretty impressive. (photo via Jason Merritt/Getty)

3. Rosamund Pike: The Gone Girl star has been killing it all red carpet season, but this jaw-dropping red Givenchy ensemble might be our favorite of them all. From the detailed waist to the high leg slit to the strappy heels, we’re drooling over it all. (photo via Jason Merrit/Getty)

6. Laura Dern: The supporting actress nominee added some much-appreciated edge to the red carpet in this stunning Alberta Ferretti gown that almost looks like the prettiest suit of armor we’ve ever seen. (photos via Jason Merritt/Getty)

8. Margot Robbie: The smokin’ hot actress rocked it in this sheer black Yves Saint Laurent gown and red lips. While that is a winning combo in and of itself, she went above and beyond with an epically blinged-out tassel necklace. (photo via Jason Merritt/Getty)

10. Jamie Chung: Jamie literally brought fireworks to the red carpet in this two-toned tulle gown with firework-shaped embellishments. You could say this dress blew us away (sorry, had to). (photo via Jason Merritt/Getty)

12. Anna Kendrick: Kendrick’s role as Cinderella in Into the Woods must have rubbed off on her. The actress looked like a straight up princess in a coral Thakoon dress with a bejeweled neckline. (photo via Frazer Harrison/Getty)

13. America Ferrera: As one of the first to arrive, America kicked things off right in this Grecian Jenny Packham gown with an ombré twist. (photo via Jason Merritt/Getty)

14. Naomi Watts: Those dark lips and beachy waves are enough to win us over on their own, but throw in this embellished gown by Armani Privé and we’re smitten. (photo via Frazer Harrison/Getty)

15. Cate Blanchett: After reflecting on Cate’s 2011 Givenchy dress we were hoping the star would make waves in a totally fashion-forward look, but she chose to play it safe in a simple black Margiela gown and Tiffany & Co turquoise necklace. (photo via Jason Merritt/Getty)

18. Reese Witherspoon: Well hello, beautiful! The Best Actress nominee knocked it out of the park in this elegant black and white Tom Ford dress. We’re going to guess this look is going to go down in Oscar history. (photo via Jason Merritt/Getty)

19. John Legend and Chrissy Teigen: If there was an award for “most fashionable couple” we’d hand it over to this duo in a second. Chrissy Teigen showed off those ultra-long legs in a Zuhair Murah-designed gown. (photo via Frazer Harrison/Getty)

20. Jennifer Lopez: Jenny from the block? Are you in there? In typical J. Lo fashion she went for it in this Elie Saab showstopper. (photo via Jason Merritt/Getty)

21. Solange Knowles: This definitely isn’t something that would look good on everyone, but leave it to the fashion-forward singer to make this unique Christian Siriano dress look effortless. (photo via Jason Merritt/Getty)

23. Oprah Winfrey: And then there’s Oprah, just looking like Oprah in a custom-made Vera Wang number. You go girl. (photo via Jason Merritt/Getty)

24. Lady Gaga: Now this is the Gaga we’ve been waiting for. Kitchen-esque gloves paired with a Azzedine Alaia dress? We would expect nothing less from the newly engaged pop star. (photo via Jason Merritt/Getty)

25. Emma Stone: Forget the all the white and black we’ve been seeing throughout award show season. This EPIC lime green Elie Saab dress is seriously blowing us out of the water. (photo via Jason Merritt/Getty)

27. Jennifer Hudson: Teach us your ways Jennifer. The actress and singer looked seriously beautifully in this pastel yellow number by Romona Keveza. (photo via Jason Merritt/Getty)

28. Meryl Streep: We’re not going to lie, we kind of hoped the nominee would amp up the drama tonight, but she kept things classic in this Lanvin ensemble. (photo via Jason Merritt/Getty)

30. Kerry Washington: Continuing with the cream trend we’ve been spotting on this year’s red carpet, Kerry Washington made the color her own in this sleek peplum look by Miu Miu. (photo via Jason Merrit/Getty)

Which looks have been your favorite so far? Drop us a line in the comments below.