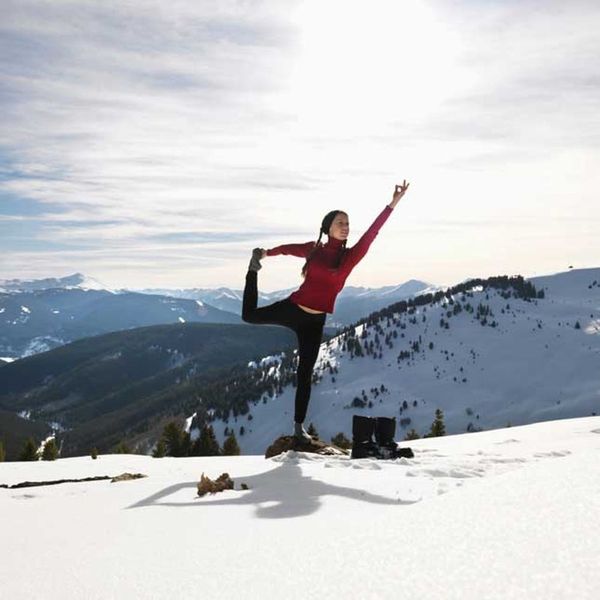 We didn’t think yoga could get any more creative, what with doga (AKA dog yoga), paddleboard yoga, laughter yoga, aquatic yoga and, of course, coga (cat yoga). But apparently, 2016 is going to be the year of snowga.

So what exactly does snowga entail? Basically exactly what it sounds like: doing yoga moves in the snow. Flow Outside owner Jen Brick DuCharme told The New York Times that the cold temperatures make holding positions more challenging, and so does the uneven ground. Brittany Holtz, founder of Studio B Power Yoga in Annville, Pa., told ABC News that snowga is great for those who want to increase their balance, focus, concentration and muscle toning. Most snowga classes focus on holding standing or balancing poses like tree pose and warrior.

And as you can imagine, snowga makes for quite the fun Instagram pic. In fact, over 26,000 people have used the #snowga hashtag. Good yogis can just strike a position in any winter wonderland they see fit, but more and more studios, including Flow Outside, the Windham Mountain Resort in the Catskills and Mohawk Mountain in Connecticut, are offering snowga classes. It is also catching on in Europe after a retreat program was started in Val d’Isère in the French Alps.

As for whether it’s safe or not, you’re probably better off doing it with a class, at least at first, as they can make sure your muscles are nice and warmed up before you stand in the snow for almost an hour. Most of these classes have you take a solid trek in snow shoes and then practice yoga for about 45 minutes. They also encourage students to layer up in the proper gear, though if you’re doing it right, you’ll end up getting hot enough to take some clothing off. It is riskier for the people who may be trying to get that perfect snowga pose while wearing leggings, no shoes and a skimpy tank, since you’re likely to stress your internal organs and nervous system.

While this may not be everyone’s cup of tea (though you will probably need one after!), it is definitely cheaper than skiing.

Will you give snowga a try? Tweet us @BritandCo and let us know.

Meredith Lepore
Meredith is a freelance writer/editor who writes for Levo League, Bustle, Refinery 29, Instyle.com as well as magazines including Marie Claire, SELF, Women's Health and Cosmopolitan. Before going freelance she was Editor in Chief of the women's career site The Grindstone. She earned her Masters in Magazine, Newspaper and Online Journalism from the Newhouse School at Syracuse University. Meredith resides in New York full time and enjoys SoulCycle, jogging and playing with her Yorkshire Terrier Otis, who also loves SoulCycle.
Fitness
Health
Fitness Winter Yoga
More From Health