I Went to a Cat Yoga Class. This Is What Happened. 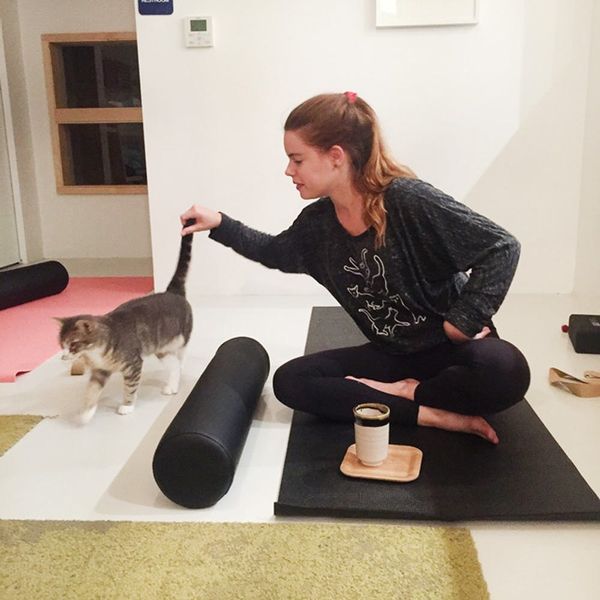 I’m a huuuge cat person — a self-proclaimed crazy cat lady, for sure. I’ve had cats all my life and was *thrilled* when I heard last year that a cat cafe was planning to open in San Francisco. So naturally, I jumped for joy when I heard it was offering a cat yoga class. I absolutely couldn’t wait to check out the concept and see if the hype lived up to the dream situation I had conjured up in my own mind, which was racing: Will there be *kittens*? What kind of yoga will we practice? Will the kitties get irritated? Am I allowed to pet them in the middle of a pose? There was only one way to find out.

All it took was $40 and I was signed up for my first feline yoga class at KitTea, a cat cafe in the Hayes Valley district of San Francisco that is owned and operated by obvious cat lover Courtney Hatt (who took the class with us). KitTea works with a number of shelters and rescues throughout the Bay Area to source its cats, all of which (yay!) are available for adoption. At the time of my class last week, the cafe had facilitated almost 60 adoptions since opening in June. Besides the clowder of cats to kick it with (you know this term if you’re a REAL cat person), the cafe also offers tea and small bites to nosh on. Basically, it’s a sublime experience that any/all animal lovers should experience. Here’s how it went:

There were eight people including myself in the class (a small class size is key with the cats so they aren’t overwhelmed) and the ages spanned from people in their 20s to people in their 70s — quite a range. The class was an all-levels yoga practice, so it was not overly complicated and perfect for varied abilities. I appreciated how they made the entire experience as relaxing and calming as possible: They played super chill music, dimmed the lights and fired up a scented humidifier, which all added to the mood. It was very zen. The yoga teacher made sure to give us a little pre-class disclaimer that the cats — there were about 10 of them who showed up for yoga — would be walking freely throughout the class and we could modify any pose to get a better petting or playing position. Whew! After about an hour of yoga, we wrapped up the class with the classic “Ommmm” — but instead said “Meowwwww-m.” It was amazing.

The cats! That’s why we’re all here, right? The felines truly made this a one-of-a-kind experience. Having live, fluffy, cuddly creatures popping up as you’re doing Downward Dog was so much fun. Petting a cat while you’re doing Cat Cow? Incredible. There was also nothing like forgetting that you’re in a cat yoga class, being totally in the moment and then realizing that a cute kitty is crawling across your lap. It made the whole practice very special. What *really* got me was when the yoga teacher placed a cat on each of our chests during the final Savasana — no one moved for about ten minutes because the cats were so calm and peaceful laying on us. It was the purrrfect way to end the class.

When the class wrapped up, we each received a delicious pot of tea of our choice (yes, they had punny names like Cat Nap and delish flavors like hibiscus) and got to all relax with the cats. Everyone stayed for the full 30 minutes of hangout time, which really spoke to the individuals who go to these classes — no one scooted out right away, which is common with other yoga classes. Sometimes in yoga, it feels like people only truly relax and calm down during the practice itself — then, when the clock says class is over, so is that restorative feeling we’re all after. This is NOT the case with the cat yoga class, which was super refreshing; there was no rush. Everyone in this class was totally dedicated to fully chilling out and letting the yoga/cat combo work its calming magic on them.

Overall, the cat yoga experience was even better than I expected. It was both fun and relaxing, without being pretentious and intimidating (come on, we’ve all been to one of THOSE yoga classes/studios). The staff was incredibly welcoming and knowledgeable about yoga and the cats — the CEO Courtney could literally tell us the life story of every single feline that lives there, which made it feel more personal. I left knowing which cats were siblings, who likes to sleep in late, which kitties are night owls and who prefers wet food over dry food.

I think everyone should give a cat yoga class a try (as long as you aren’t allergic!) and get in touch with their inner meowwwww-m. As you can imagine, there were WAY too many photo opps for me to just choose a couple, so check out all my pics from this class!

Favorite part of this photo = this little one’s LEG, OMG. This was during post-yoga hangout time.

KitTea has a bunch of cool cat-related stuff you can buy! Toys, books, products… it was hard not to walk out with it all.

Courtney, the CEO and founder of KitTea has enough cat knowledge to last a lifetime.

Living my absolute best life with this little guy.

Would you ever go to a cat yoga class? Share your thoughts in the comments below.

Beth Wischnia
You can typically find this Texan writing, trying on a new lipstick, gabbing with her identical twin sister or volunteering at the local animal shelter. She finds inspiration from rosé, beauty products, Tex-Mex and cats.
Cats
Entertainment
Cats Yoga