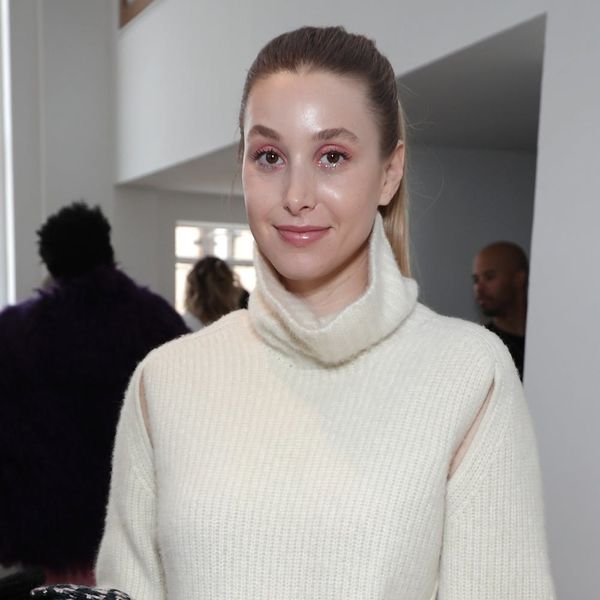 Being a new mom isn’t easy — and it’s even harder when parts of the mother/baby bonding experience are causing you pain, as The Hills star Whitney Port can attest. The 32-year-old, who gave birth at the end of July, just posted an incredibly raw and honest vlog titled I Love My Baby, But I Haven’t Loved Breastfeeding That Much, in which she shares that she’s struggling to feed her child naturally.

“I totally went into this whole thing with the intention of breastfeeding and wanting to breastfeed,” she says in the clip. While the fashion designer said she was willing to try and still is, after “24 to 48 hours of doing it, it just got so incredibly painful.”

Upon returning home from the hospital, she reached a breaking point when she says it felt like “someone [was] slicing my nipples with glass.” Ouch!

After switching to pumping for several days, Port met with a lactation consultant, who said that her baby may have “tongue-tie:” a short band of tissue which tethers the tongue to the floor and can affect breastfeeding and range of movement of the tongue.

Yet, even after undergoing a procedure to correct little Sonny Sanford’s tongue-tie, the reality alum says it hasn’t made much of a difference in increasing her comfort. “It’s just really painful. I’m not really sure if it’s painful because I’m just getting started again, or if it’s painful because he’s not latching on correctly, and I just feel like a lot of people are going to tell me to continue to have patience and to try to do it cause it’s only been a week, but… I just don’t know if it’s going to get better or not.”

When asked how she felt about the ordeal, Port began to cry, saying, “I think I’m just tired and obviously want to breastfeed… that’s what people say is the best bonding experience.”

The young mother also revealed that she’s been getting plenty of pressure from people to go the breastfeeding route, which has only made things more difficult. “I’ve been getting pressure from… older people that want me to try it and continue to try it” she concedes while wiping away her tears.

I'm not obsessed with breastfeeding. There. I said it. Don't get me wrong, I LOVE the fact that my baby is getting all the amazing nutrients from my milk and that I am literally giving him life, but it has been quite the challenge. A challenge I didn't feel prepared for at all. In this Chapter of I Love My Baby But... I discuss my trying journey through breastfeeding. I have gained so much confidence just through the support you guys have given me, so if any of this rings true or you have any tips, I am all ears. We mothers have to be there for each other. I sincerely believe this community is what has given me the confidence to feel I am not doing anything wrong. Yes, there are times the opinions and judgements of other seep in, but then I remember I have you guys and it makes all the difference. I am really looking forward to reading all the comments and tips this week. I need them more than ever. Click the link in bio to watch full video. XOXO

She’s not totally without support — as she shared in the vlog, a lot of what she calls “the new moms” have told her not to put so much pressure on herself.

Still, it’s enough to make her second guess her own heart, which she says is telling her that she’s fine with pumping. “I’ve heard people talk about this pressure from other mothers and other people, and I never thought that I would let it get to me because I think I’m a pretty strong person and I go with my gut and I don’t compare myself to other people and what other people are doing… and now I’m doing exactly that.”

Chatting w/ @mydomaine about raising the next generation to embrace love, not hate: Although Sonny is too young to learn anything right now except that crying will get him changed and fed (he's only 3 weeks old ;)), my number one priority as a mom is to teach him right from wrong. Included in that giant life lesson, is the fact that people are defined by a large sum of different qualities, life experiences and backgrounds. Those who attempt to define people by the color of their skin are either afraid of the unknown or too lazy to do the real work it takes to know someone. If I can teach my son that it takes a lot more digging than just looking at someone to know their strength of character than I will have taught him a lesson worth passing on to the next generation. 📷: @colemoser

She consequently worries about throwing in the towel too early, hypothesizing that maybe it WILL get better in time, but her gut is telling her to stop.

“Really my gut is telling me that if he’s getting the breast milk, that’s what matters to me.”

Do you relate to Whitney’s struggles? Share with us @BritandCo.

Nicole Briese
Nicole is the weekend editor for Brit + Co who loves bringing you all the latest buzz. When she's not busy typing away into the wee hours, you can usually find her canoodling with her fur babies, rooting around in a bookstore, or rocking out at a concert of some sort (Guns N' Roses forever!). Check out all her latest musings and past work at nicolebjean.com.
New Parents
Celebrity News
New Parents Parenting
More From Celebrity News