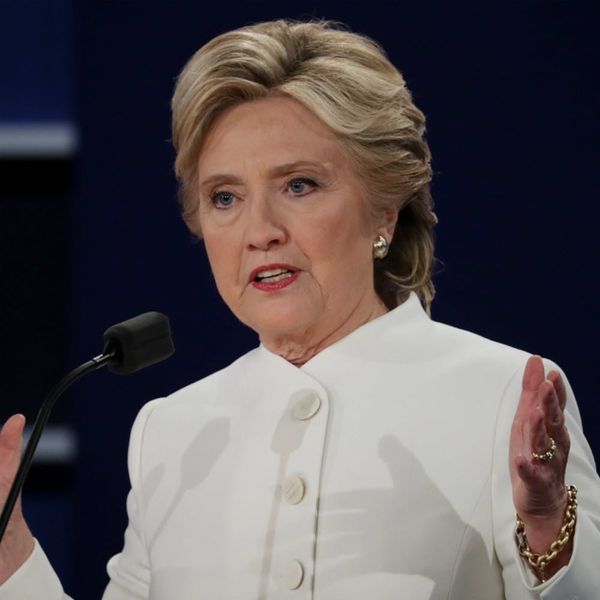 The third (and, thankfully, final) Presidential debate happened last night in Las Vegas, and by all accounts, it was a doozy. Moderator Chris Wallace took a very hard line, asking both candidates very difficult questions, but one in particular proved that for women’s reproductive health, it’s important for men to take a back seat and listen up when it comes to issues — like repealing Roe v. Wade.

When asked about the law that protects a woman’s right to choose, Trump said things that medically aren’t true, while Hillary spoke about women’s health and the very difficult decisions we may have to make regarding our bodies and pregnancies. We aren’t the only ones who noticed this difference of language. Twitter has blown up in response to the candidates’ very different understanding regarding women’s reproductive rights.

Many were upset with how Trump painted the picture:

Others pointed out that Trump doesn’t have a good grasp on our government to even make such generalizations:

Roe v Wade will be overturned "automatically". Does he understand or care about separation of powers?

Trump says overturning roe v wade will "happen automatically" with the justices he intends to appoint. (that's not how the court works)

Celebs also had their say:

Hillary is crushing these Roe v. Wade questions. Nice pivot to libertarian ideas of not having government interfere too.

But of course, Secretary Clinton had the last (best) word:

This was not actually a hard question.

All in all, this final debate gave us proof that men don’t truly understand women’s issues the way we do, which is why it’s so important that we see more women in politics… and the White House.

What was your most surprising moment of last night’s debate? Let us know @BritandCo!