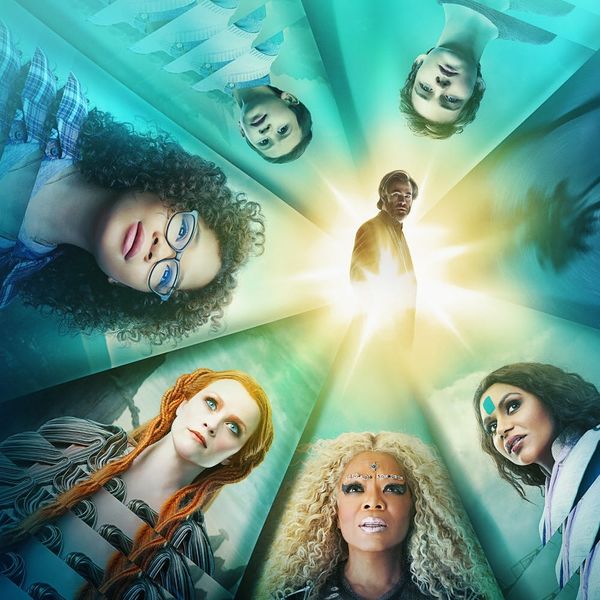 We’ve been on board with Disney’s A Wrinkle in Time ever since we learned about the stellar cast that would be bringing Madeleine L’Engle’s beloved classic story to life. The movie won’t be out for another four months, but Disney just treated us to a new poster and teaser trailer that have us more than excited than ever about the film.

In the stunning image, Dr. Alex Murry (played by Chris Pine) is surrounded by the magical trio of Mrs. Who (Mindy Kaling), Mrs. Whatsit (Reese Witherspoon), and Mrs. Which (Oprah Winfrey) standing within a prism that also features Storm Reid as the formidable main character, Meg, along with her two young companions.

“The first image [I had in my head] was to place a brown girl in that role of Meg, a girl traveling to different planets and encountering beings and situations that I’d never seen a girl of color in,” the film’s director, Ava DuVernay, told Entertainment Weekly.

She added, “All of those scenes struck my fancy, and then it was also something that [Disney VP of production] Tendo Nagenda said to me, which I’ll never forget. One of the things that really made me want to read it was when he said, ‘Ava, imagine what you would do with the worlds.’ Worlds! ‘Planets no one’s ever seen or heard of,’ he said. There aren’t any other black women who have been invited to imagine what other planets in the universe might look and feel like. I was interested in that and in a heroine that looked like the girls I grew up with.”

Reid, whose character is determined to save her father no matter how far away from home that journey takes her, further explained the importance of the project in her own life, telling EW, “It means everything to be a girl of color and play Meg Murry because Meg Murry is, in the books, a Caucasian little girl. It’s just surreal because I get to empower other little African-American girls around the world and say that you can be a superhero and you rock and you can conquer the world and you are beautiful just the way you are and your flaws are nothing and you’re awesome. It feels really good to be able to inspire not only little girls [but] everyone.”

In addition to the new poster, Disney dropped a sneak peek of the upcoming trailer, which we’ll be able to see in full during the American Music Awards this Sunday. But prepare yourself, because this glimpse is beyond exciting!

A Wrinkle in Time is scheduled to hit theaters on March 9, 2018.

Are you excited for A Wrinkle in Time? Let us know @BritandCo!

Desiree O
Desirée O is a ‘Professional Bohemian’ who loves anything and everything related to the arts, entertainment, and pop culture. She ADORES being a ‘Newsy’ for Brit + Co, covering all of the latest tidbits of awesomeness that you want to read about. When she’s not writing, she’s either making messy art, going on long adventurous walks with her camera, or poking around over at bohemianizm (http://www.bohemianizm.com/). You can find out about Desirée O and her work at http://DesireeO.com/ or follow her on Twitter @DesireeO.
Disney
Movies
Disney Movies