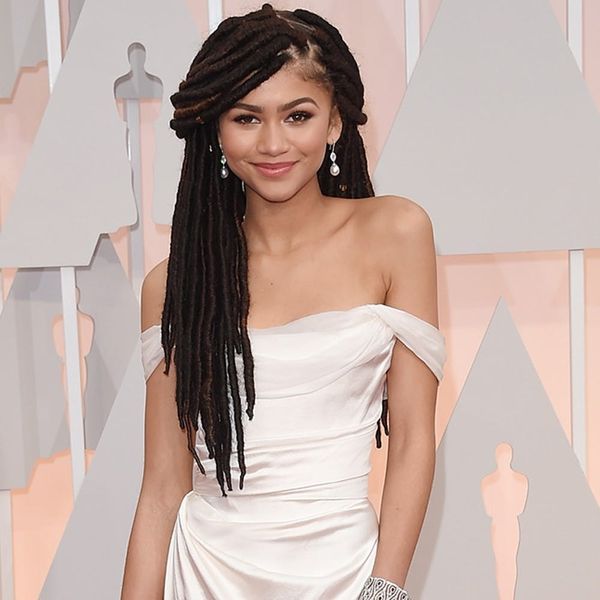 Over the past few years Zendaya has been bringing it on the red carpet, making a name for herself in the fashion world while her acting and singing career continues to bloom. After garnering major attention for those gorgeous dreads at this year’s Oscars, the multi-talented star has decided to turn her love of style into what we assume will be a budding empire with the announcement that she’s designing her very first shoe collection.

According to InStyle who broke the news, the collection — a collab with her stylist, Law Roach — isn’t launching until back-to-school shopping season, but Zendaya plans to debut the shoes (or one of them at least) at the Met Gala on May 4. If that makes it sound like the line will be versatile — shoes you can wear both running down the dorm hallway + at a fashion-focused bash — it will be: everything from boots, sandals, sneakers and flats are on deck, and all in a variety of fabrics and embellishments including trendy head turners and classic black pumps.

It’s pretty evident that Z, who is hosting the Radio Disney Music Awards this weekend, loves to constantly change up her looks, and that is exactly why she chose footwear as her first venture into the world of fashion. Her stylist told InStyle, “Everybody knows that if you bring a new shoe to an outfit, it kind of recreates it and makes it brand new all over again. We just thought that was the most exciting thing we could do — and with a little piece of her style.” Without a doubt, her heel choices have made a number of her all-time best looks. Here’s hoping some of those styles — a handful that we’ve highlighted below — make it into the collection.

1. Pop of Color Heels: We don’t think there’s anyone in the fashion world that doesn’t love adding a playful color explosion to their look every once in a while. When nails, jewels or makeup aren’t the mediums you want to make a statement with, we’re banking on colorful heels like these turquoise ones to add to our shoe closets. (Photo via Jemal Countess/Getty)

2. Strappy Sandals: You don’t always need to go full-on gladiator sandal to make an open-toed statement. A cage-y heel in a neutral color will have you putting them on replay anytime of the year. (Photo via Alberto E. Rodriguez/Getty)

3. Metallic Platforms: If you’re looking for footwear that will have onlookers doing a double take, then you’re going to hope Zendaya releases some metallics like these ones she has worn in the past. Not only will they give you height (needed or not), but they will also give you confidence and (we’re sure) compliments, though we’ll also accept the style reinterpreted as a silver platform sneaker too. (Photo via Jason Merritt/Getty)

4. Embellished or Patterned Boots: Solid knee-high boots are so yesterday. Fingers crossed the K.C. Undercover leading lady gives us some flashy boots to pump up our lineup. We see studs or edgy color blocks in our footwear future. (Photo via Larry Busacca/Getty)

5. Sneakers: When it comes to casual wear, Zendaya really knows how to pull off the look. We’re into clean, comfy yet fashionable footwear like the lace up sneaks she’s sporting above that would look just as cool paired with leggings or a skirt. (Photo via Michael Loccisano/Getty)

6. Sporty Heels: If you want that sporty vibe but are so anti-flats, then heels like this pair are absolutely going to be for you. We’re really hoping this varsity-striped look is a part of the collection, but if not, you could always DIY a similar look with help from us, natch. (Photo via Charley Gallay/Getty)

Which Zendaya footwear will you be adding to your streetstyle in the fall? Let us know in the comments.