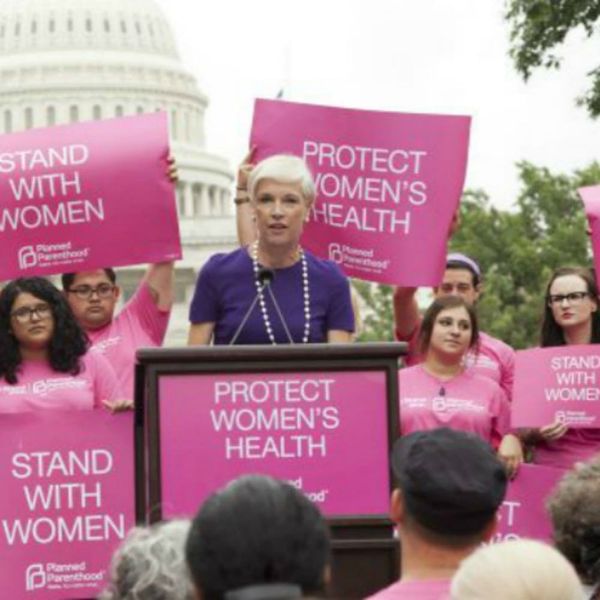 Christmastime is the season for giving, and while it’s always nice to give gifts to the ones you love, there’s also something kind of special about giving to those in need (just ask Kristen Bell): In fact, studies have recently proven that acts of kindness really do make you happier. And who better to help than fellow women (just like you!) who maybe aren’t so fortunate around the holidays?

1. The Girl Project: With ambassadors like Sophia Bush, you know Glamour’s The Girl Project is legit. Helping women in more than 120 countries to gain access to secondary schooling by targeting the issues that prevent them from getting there (things like, say, child marriage, bullying and poverty), this org is aiding females from the ground up. (Photo via Dimitrios Kambouris/Getty)

2. Step Up Women’s Network: Whereas The Girl Project aims to provide women with the funds and resources they need to receive secondary education, Step Up aims to inspire the drive it takes to get them there. They focus on young girls from under-privileged communities and teach them to empower themselves through mentorship. In short? They encourage them to go after their dreams in spite of the obstacles they may face.

3. Planned Parenthood: Perhaps the most renowned organization of the bunch, Planned Parenthood has been helping women receive education, preventative and primary care with regard to reproductive health for 100 years now. Whether or not you agree with all of the services offered — the site says that just three percent of its services are abortion-related — the other 97 percent of the health org’s services include administering pap smears and breast exams, preventing unwanted pregnancies, testing and treating for STIs and other, miscellaneous services (such as providing hormone therapy treatments to the transgendered), causes we can likely all agree are not only necessary, but pretty rad. With the organization’s practices in jeopardy following the Presidential election, now’s as good a time as any to make your support known. (Photo via Planned Parenthood)

4. National Breast Cancer Foundation: This one is exactly what it sounds like: a resource for women on all things breast cancer. Whether educating us gals about how to recognize warning signs to aid in early detection or providing health and emotional support for those that have already been diagnosed, NBCF has you covered. The organization also provides mammograms free-of-charge to women in need in all 50 states, which is pretty cool in and of itself. Considering that the disease will affect one in every eight women and doesn’t discriminate, there’s a good chance your donation might even one day be helping someone you know. (Photo via the National Breast Cancer Foundation)

5. Girls Not Brides: While this one may not hit quite as close to home, it’s every bit as worthy of a cause. Girls Not Brides isn’t so much an organization, per se, as a global network, linking groups from more than 85 countries together with one goal in mind: ending the troubling practice of child marriage (marrying young woman off before the age of 18 without their consent), which, sadly, affects more than 15 million young girls per year. We can’t imagine not being able to choose our own paths, let alone the person we love, so this one strikes a major chord with us. (Photo via Girls Not Brides)

6. Rape, Abuse & Incest National Network (RAINN): RAINN literally has someone standing by 24/7 for victims of sexual abuse. Working much like Girls Not Brides to form a whole from the sum of its more than 1,000 local parts (AKA service providers), RAINN has helped more than 2.4+ million survivors since its inception in 2004. But that’s not all. The charity also works in close conjunction with the media and entertainment industries to educate people about rape and incest crimes, and works diligently to get legislation passed to deal with the alarming (and growing) number of untested rape kits in each state. (Photo via Omega Phi Beta Society/RAINN)

8. Women on Wings: While the National Partnership works to get us all fair wages on American soil, Women on Wings is working to create one million jobs for women in rural India. By sharing their own business knowledge and acting as consultants to local businesses overseas, members of this group give women the tools to help themselves.

We are SO grateful for our network of Days for Girls volunteers who sacrifice so much time and energy to bless the lives of girls and women everywhere. Your selfless and generous service is an inspiration to us, and in the spirit of thanksgiving we say thank you to each one of you!! 🦃 How about this picture from Days For Girls New York City NY Chapter?? Perfection! 😍

9. Days for Girls: Aiming to arm every girl in the world with access to quality hygiene and education by 2022 (so in just six years time!), Days for Girls has a lofty goal, but a legion of chapters and teams across the globe working together just might be the one way to get it done. Through the help of volunteers like, well, you, the organization sends kits you make stocked full of all the girlie essentials (trifold reusable flannel pads, washcloths, totes and more) to women in need so that they can effectively deal with their monthly cycles for up to three years. Makers, get crackin’ — this one’s for you!

#TBT with @adelesupreme #Repost New installation is being completed as we speak! See how Adele has transformed WMG's space this Saturday Oct. 1st at the exhibition opening reception for "The Pretty Nasty Imagination of Adele Supreme." Link to tickets in our bio. You don't want to miss this event! #chicagogallery #womanmadegallery #openingreception #chicagoart #womenartists #liveperformance ・・・ Wall mural completion

10. Woman Made: Woman Made is really a two-for-one. By shopping the gallery, not only are you supporting women artists, whose works comprise each and every collection of art that passes through the building’s doors, you’re also getting a great piece of artwork. Sounds like a pretty sweet deal to us!

Which charity most piqued your interest and why? Let us know over @BritandCo.

Nicole Briese
Nicole is the weekend editor for Brit + Co who loves bringing you all the latest buzz. When she's not busy typing away into the wee hours, you can usually find her canoodling with her fur babies, rooting around in a bookstore, or rocking out at a concert of some sort (Guns N' Roses forever!). Check out all her latest musings and past work at nicolebjean.com.
Charity
Celebrity News
Charity
More From Celebrity News