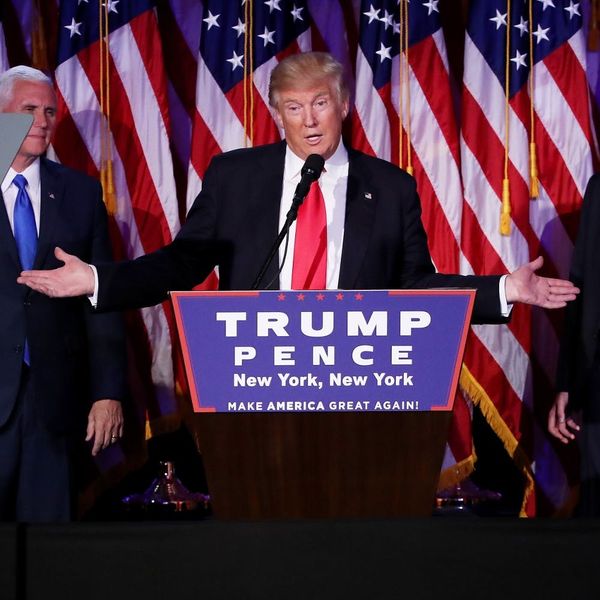 Granted, we’re not keen on fear-mongering, but we’re also willing to give our friends a head’s up when a sitch might be about to turn bleak. While some are disappointed by Trump’s win (even spurring them into immediate action) and others are seeing the silver lining, it’s hard to argue that many women’s issues are likely about to endure major upheaval. While some folks are advising ladies to get IUDs before it’s too late, there are plenty of other things you may need to be concerned about.

It’s no secret that Trump is not a fan of Obamacare, and though it’s helped 20 million people (including many women you surely know) obtain health insurance, it will likely be reversed and buried under our new leadership. Though it took a heck of a lot of work to implement, it will take just as much work to revoke, so get ready for a healthcare roller-coaster.

Planned Parenthood and abortion rights are also in trouble. VP-elect Mike Pence is not only pro-life, he is also responsible for getting a bill passed that requires burial of fetal remains (even from miscarriages). Not only will he be able to affect policy around abortion and birth control (e.g. funding for Planned Parenthood… or rather, defunding), their administration also wants to appoint a Supreme Court justice who would aim to overturn Roe v. Wade.

Marriage equality could also be potentially altered, putting current and future legal same-sex unions in jeopardy. Though this would again take time to overturn, it would also be a huge step backwards.

We cannot let anyone keep us from being ourselves. Trans people have endured worse. Being true to ourselves is all we have. https://t.co/tUrrJP3eO7

Celebs like Laverne Cox are speaking out to ensure that the transgender rights fought for by Obama’s administration stay in place, though under Trump and Pence, it’s likely that these measures meant for equality and protection would also come under fire.

Though we can’t be sure what the future holds, we can certainly hope for the best and do whatever is needed to be sure the country keeps heading in the right direction.

Are you concerned about any possible changes due to the new President-elect and his administration? Tweet us @BritandCo!

Desiree O
Desirée O is a ‘Professional Bohemian’ who loves anything and everything related to the arts, entertainment, and pop culture. She ADORES being a ‘Newsy’ for Brit + Co, covering all of the latest tidbits of awesomeness that you want to read about. When she’s not writing, she’s either making messy art, going on long adventurous walks with her camera, or poking around over at bohemianizm (http://www.bohemianizm.com/). You can find out about Desirée O and her work at http://DesireeO.com/ or follow her on Twitter @DesireeO.
Politics
Politics
Politics Womens Health