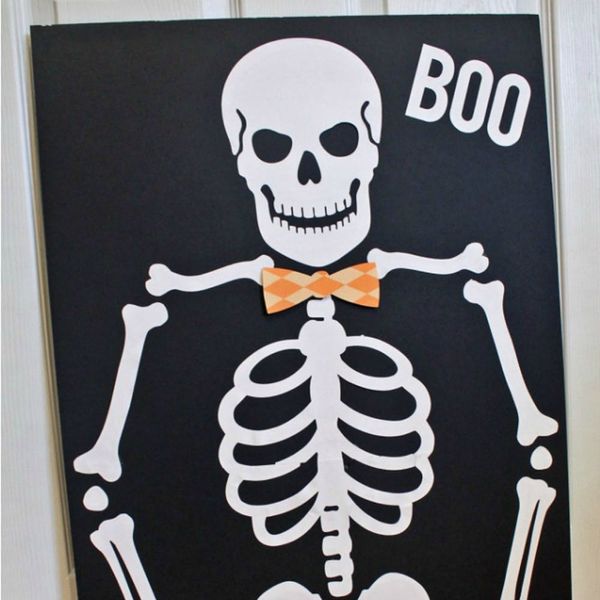 Halloween is coming (wha, wha, whaat?!). That’s right — time to get those costume ideas ready while you plan out the *perf* Halloween bash. Take those Halloween yard decorations to the next level this year with a reminder of some of the top pinned pumpkin ideas. Then check out those no-carve painted pumpkin ideas which are just perfect (and perfectly safe) for little makers in the making. Speaking of little kids, if you’re looking for Halloween-themed fun and games, we have 17 crazy Halloween activities that will have the little monsters on your block howling with laughter.

1. Halloween Mummy Relay: Wrap up the mummies from head to toe — giving them room to see and breath — and they’ll be off to the finish line as fast as a mummy can move. Even the parents standing on the sidelines will be giggling with laughter. (via Six Cherries on Top)

2. Pin the Bowtie on the Skeleton: Like the donkey game we all know and love, this version has kids pinning colorful bow ties on Mr. Bones. Doesn’t he look sharp in his formal attire? This game costs less than $5 to make and provides hours of entertainment. (via Who Arted?)

3. Pop Goes the Pumpkin: A Halloween take on the classic carnival game, this one doubles as a festive wall decoration. As kids stick the balloons with pins, they burst, raining confetti and candy on their pals. This one’s explosive fun! (via Martha Stewart)

4. Pumpkin Patch Stomp: Kids will love getting to stomp on pumpkin-colored balloons until they burst. Coins and bubblegum prove heavy enough to anchor the balloons and survive little stomping feet. If you’ve got a playlist in the works for your shindig, be sure to include “Monster Mash” and play it as a backdrop to this game. (via Delia Creates)

5. Spider Web: Hanging rope, string or painter’s tape from tree to tree creates a perfect web-like obstacle course. All the kids that make it through the spider’s web win a prize. (via Ashley Ann Photography)

6. Donut Dunk: This challenge recalls the traditional apple dunk game, without getting everyone wet. Some kids will follow the no-hands rule… others won’t — but both are hilarious to watch! Use apple cider donuts if you want to stay true to the harvest theme. (via Small Fry)

7. Pumpkin Bowling Halloween Game: Pumpkin Bowling is easy for kids to play and for parents to pull off. Make ghost faces on rolls of toilet paper using a black permanent marker, then pick your roundest pumpkin to be the “ball.” Kids will happily take turns knocking down pins for hours! (via I Dig Pinterest)

8. Pin the Spider on the Web: Another take on Pin the Tail on the Donkey, this spider game is so cute and very easy for even the youngest toddlers to play. Click through for printable download suggestions. (via Ella Claire)

9. Spider Races: Armed with a plastic spider and a wide milkshake straw, kids blow their spider across the finish line. This game results in tons of giggles as spiders go crashing into one another or get blown away by an opponent. Even the adults will want to play this one. (via Still Playing School)

10. Jello Worms: Kids love gross sensory games, but this one’s extra gross because these worms are edible. You’ll hear squeals of laughter as they chomp down on squishy, slimy jello worms. (via One Little Project)

11. Halloween Cans Bowling Game: Green Frankenstein, orange pumpkin, white mummy or colorful cyclops — kids will want to paint them all. This cute monster bowling game is as much fun for them to make as it is to play, so that’s two activities in one. (via Keeping It Simple)

12. Spider Web Walking Halloween Game: Part maze, part balancing act, this game is spooky without being scary for little ones. The object is to get from point A to point B, while avoiding all ghosts. (via No Time For Flash Cards)

13. Skeleton Puzzle: Kids have so much fun putting Mr. Bones back together again that you’ll need to drag them away from this one. All you need to make it is some heavy cardstock and a Sharpie. If you’ve got a party playlist in the works, “Dem Bones” would be a perfect theme song. (via A Girl and a Glue Gun)

14. Pumpkin Toss Game: This game is so easy to make. Just trace pumpkin patterns onto orange poster board and cut the pieces out. Orange tennis balls with sketched on jack-o’-lantern faces are perfect for tossing, but bean bags will work too. Click through for a downloadable pattern. (via BHG)

15. Mix and Match Jack-o-Lantern Faces: Kids have hours of fun deciding what sort of face to put on Mr. Jack. Scary? Cute? Funny? Or all of the above? Similar to the Mr. Potato Head game, the goofier the better. Click through for scans to trace the parts for six different faces. (via Chica & Jo)

16. Frankenstein’s Phlegm — a Homemade Slime Recipe: Here’s another one that’s super icky but super awesome at the same time. Slime is just so cool — the way it slips through your fingers and can form all sorts of interesting, goopy shapes. Bonus: Use glow in the dark paint for a whole other dimension of fun after the lights go off. (via Dream a Little Bigger)

17. Dollar Store DIY Mason Jar Mummy Luminaries: These adorable mummy luminaries are quick, easy and inexpensive to pull off. Light them with battery operated “candles” and they’re safe for kids. Bonus: They double as both a crafty activity and cute Halloween decor. (via CincyShopper)

Sally Jones
Sally Jones is a writer and editor living in New York City. She has worked at many websites including iVillage, Ladies Home Journal, More, Parenting, Cosmopolitan, The Knot and YourTango, in jobs ranging from editor to COO. Renovation and interior design are her unhealthy obsessions hobbies. She has renovated every home she's lived in, including the rentals, and like... whoa, who does that? You can catch her at her blog Renov8or.
Halloween
Creativity
Halloween halloween ideas Halloween Party Ideas
More From Creativity