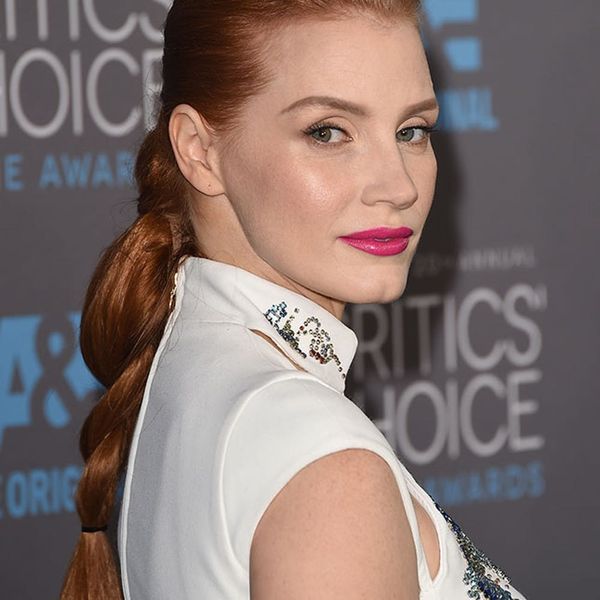 Two red carpets down, plenty more to go. Coming fresh off the heels of the 72nd annual Golden Globes, some of Hollywood’s biggest stars came back out just a few days later to attend this year’s Critic’s Choice Awards. Rosamund Pike hung out with Eddie Redmayne, John Krasinski ran on stage to give Emily Blunt a smooch after she won (seriously, why do they have to be so cute?) and now we’re left silently sobbing from this horrible case of FOMO. While this is a slightly more low-key event than the Golden Globes or Oscars, the celebs still rocked the red – or more literally, blue – carpet. Whether you missed the festivities or just want to relish in the fashion, here are eight of our favorite looks we spotted last night.

1. Jessica Chastain’s Hair: Holy plait! We’re pleading to the powers that be to make our hair grow fast after seeing Jessica Chastain’s Roman-esque braid. This one might beat out Emily Blunt’s romantic updo as the best red carpet braid of 2015 yet. (Photos via Jason Merritt/Getty)

2. Ryan Potter’s Flat Bow Tie: Tying a bow tie is hard. So why not ditch the clip-on go for a different look entirely? We’re crazy over this fun and modern take on “black tie attire.” (Photos via Jason Merritt/Getty)

4. Power Suits: Kudos to these ladies who ditched the dresses and went for the power suit instead. Although the styles are totally different – Jennifer Aniston’s sexy and slim fitting versus Andrea Riseborough’s baggy and ultra ’80s-inspired – we commend both of them for straying from the norm to sport something a little more original. (Photos via Michael Buckner/Jason Merritt/Getty)

6. Next-Level Clutches: Whether it was gemstone-inspired like British actress and singer Carmen Ejogo’s, super psychedelic like Leslie Mann’s or excessively blinged out like Orange Is the New Black star Lorraine Toussaint’s, one thing was certain: basic clutches are a thing of the past. Aside from the adornments, we’re also crazy about the size of these miniature clutches, just big enough for an iPhone, a credit card and your red carpet-approved lipstick. (Photos via Jason Merrit/Alberto E. Rodriguez/Getty)

7. Black Lace For Days: Dramatic, sexy and yet still super sophisticated, this was undoubtedly the biggest trend of the night. No matter whether it was worn with a collared neckline, like Michelle Monaghan’s number or with long sleeves like Felicity Jones’ gown, the Victorian-esque looks left us with our jaws dropped as low as Julianne Moore’s neckline. (Photos via Jason Merrit/Alberto E. Rodriguez/Getty)

8. Extra-Embellished Cuffs: We spotted lots of drop earrings at the Golden Globes, but the accessory of choice the Critic’s Choice awards appeared to be the cuff bracelets. Sticking to that glamorously sparkly red carpet trend, Emily Blunt and Brooke Anderson both rocked bulky, uber- glittery bracelets that were hard not to notice. (Photos via Jason Merrit/Alberto E. Rodriguez/Getty)

What was your favorite look from this year’s Critics Choice Awards? Chat with us in the comments below.

Cortney Clift
Cortney is the senior writer and special projects editor at Brit + Co. She typically covers topics related to women's issues, politics, and lifestyle. When she's not buried behind her computer you'll find her exploring New York City or planning her next big adventure.
Red Carpet
Fashion
Red Carpet
More From Fashion